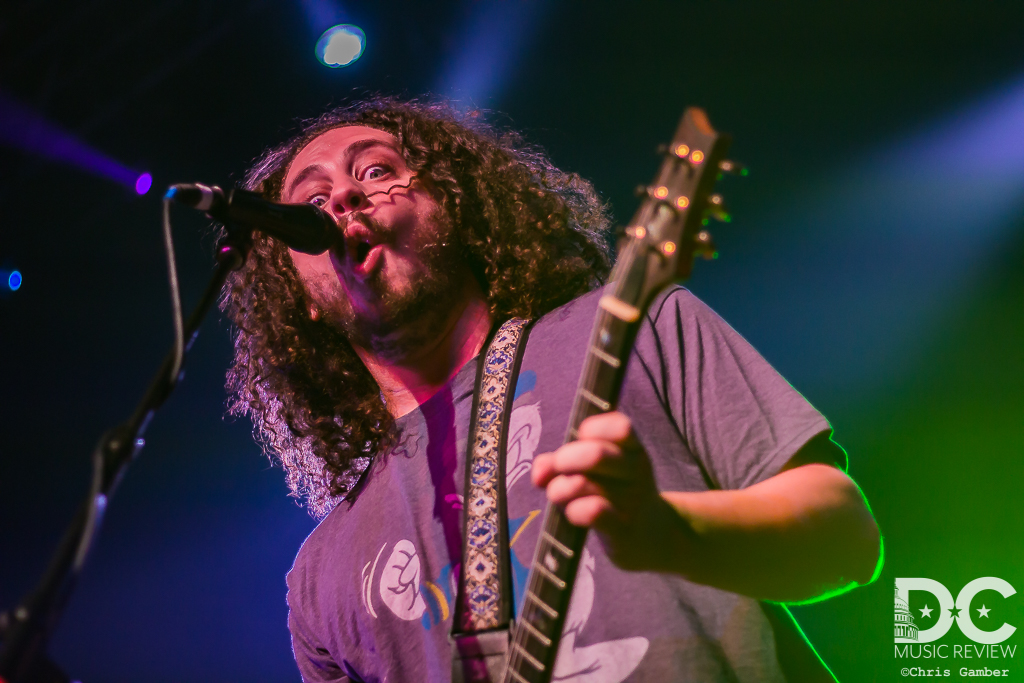 Updated December 5, 2017 at 5:00PM:  Article updated with link to Soundboard recording of this performance.

This past weekend at Rams Head Live in Baltimore, MD, Pigeons Playing Ping Pong (affectionately referred to as “P4” by their fans) played the first show in their hometown in over a year to an eager crowd ready to shake off their Thanksgiving hangovers.

The last time the band played in Baltimore, it was for a co-headlining bill with Dopapod at Baltimore Soundstage. This time around, they were the sole headliners (at a markedly larger venue) and they sold out the big room hours in advance of the show. As someone who’s been around the Baltimore live music scene for several years now, it’s been really great watching these guys grow from shows at Looney’s in College Park, to residencies at the The 8x10 and now to sold out shows at the 9:30 Club, Rams Head Live and other venues across the country. Their fan base continues to grow and they are just catching their stride. The future looks very bright for the Pigeons and their flock.

Touring for the release of their new album Pizazz, this show featured several cuts from the album as well as some classic Pigeons material and a few surprise covers. Leading off the night was “Live It Up,” the funky first track from their 2016 release, Pleasure. The energetic opener, which got the crowd dancing, led the way into “Somethin for Ya,” the first song played from the new album. The Pizzazz track's catchy chorus and hook is infectious, and it’s nearly impossible not to sing along if you’re familiar with the tune.

The first surprise of the night came during a jam sandwich that started with “Funk E Zekiel”, an older song from the band’s Funk EP, which was also the first song of the night featuring the band's horn section. The group segued into a great cover of Nirvana’s “Come as You Are” and then back into “Funk E Zekiel.” The horns left the stage for a few songs as “Burning up My Time” and “Horizon” were played next. “Horizon” is always a crowd favorite, and its “Celebrate the people you love” chorus has become sort of a mantra that the band’s fans (known as "the flock") have taken as their own.

Next came a brand new song that has not gotten the studio treatment as of yet. “Dawn a New Day” was first debuted at a sold out San Francisco show on October 20th, the same day Pizazz was released. This funky, feel good tune is going to be a great addition to their already stellar rotation of songs.

The first set continued with tight versions of “Bad For You” and another song off the new album, “Doc,” for which they brought out the horn section again to jam on. I honestly thought the first set was ending there, but the band had other ideas and went into one of my personal favorites on the new album, “The Liquid.” This song is a fast-paced funk throwdown and  was the perfect ending to the first set, leaving the crowd warmed up and ready for the music yet to be played.

Set two started off with crowd favorite “Whoopie,” which featured the horn section right out of the gate. This led into the second surprise cover of the night, Sam and Dave’s 1966 song “Hold On, I’m Comin'.” The lead singing duties were provided by Robbie Wulfsohn of the opening band “Ripe,” as the band and horns made this cover their own while the crowd ate it up. “Sunny Day” slowed things down a bit and gave the crowd a chance to breathe. Another song off the new album, “Henrietta,” came next. This is one of my favorite songs of theirs lyrically, and it’s catchy as all hell.

“Avalanche,” another new song not yet recorded, kicked things back into high gear. A funky instrumental song, this is yet another solid addition to the band’s catalog of dance floor rockers. “Ocean Flows” from the new album led the way for the final jam segment of the night, “SpaceJam > The Hop > F.U.” At this point in the night, I was all the way up front close to the rail and the energy during this final segment was palpable. The  sold out crowd was moving as one and every person in the venue was locked into the band. Everything came to a huge peak when the band perfectly segued into “F.U.” as the horn section seemed to appear out of nowhere on stage. When the band started playing those familiar opening chords, the place erupted, and the band would put their stamp on an already stellar night of music and good vibes. The band  encored with a short but tight instrumental tune from their Psychology album called “Schwanthem.” Everyone was left wanting more, which is a testament to the quality of the band’s performance this night.

For the band and its flock, this seemed like a milestone show for all that were a part of it. These guys are growing and continue to evolve at an astonishing speed, with a momentum clearly in their favor. With new winter dates just announced and new material to be played, along with the announcement of the return of the band’s highly successful festival “Domefest” in May 2018, the sky is the limit for these Pigeons flying high.

[UPDATE]  Pigeons Playing Ping Pong has released the soundboard recording of this show on Nugs.net   Please click on the image below to see this performance on Nugs.net. Enjoy our photo gallery from our photographer, Chris Gamber.