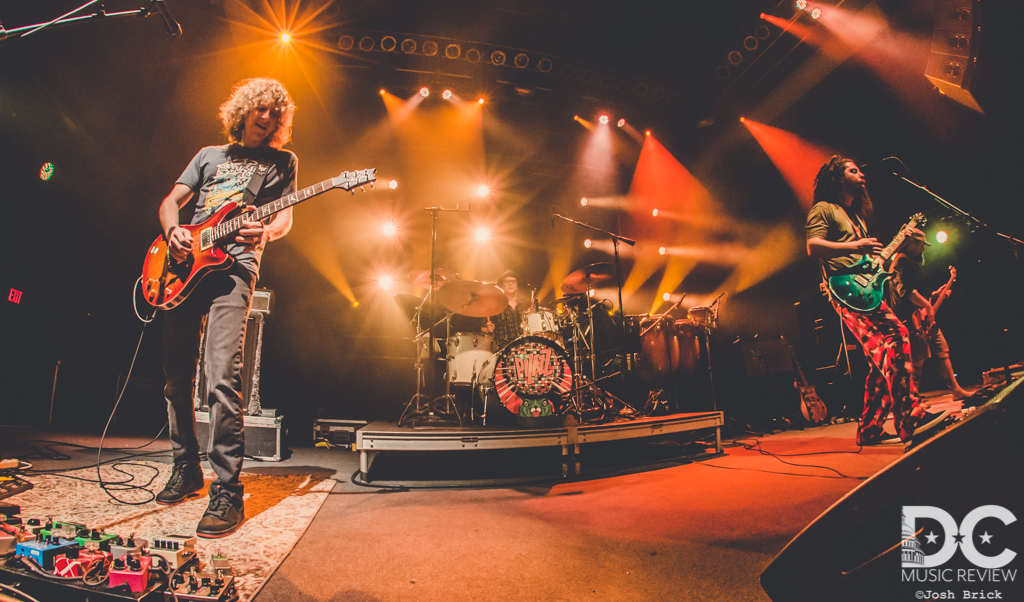 The University of Maryland-formed jam band Pigeons Playing Ping Pong kicked off their spring tour this weekend, headlining two sold-out nights at DC’s 9:30 Club and treating fans to an adrenaline-fueled throwdown at one of the band’s favorite venues. Playing to their hometown crowd, the energy in the venue was palpable for what felt like a huge milestone gig for the four-piece psychedelic funk outfit out of College Park. The Pigeons fan-base, affectionately known as “the Flock,” showed up early for a pre-show pajama party and had almost filled the 9:30 Club before the opening act left the stage. Asheville, North Carolina’s The Fritz played a set seemingly curated for Pigeons fans’ tastes, featuring tunes that moved from funk to psychedelia to jukebox covers, getting the crowd limber and hyped for the main event. As the members of Pigeons Playing Ping Pong set up their gear, the crowd cheered excitedly and was ready to rock well before Pigeons’ first set kicked off at 10:30 PM. Upon taking the stage, leader singer and guitarist, “Scrambled” Greg Ormont took a moment t acknowledge the band’s excitement for their first two-night booking at DC’s historic nightclub. Kicking off the festivities with “Porcupine,” the crowd’s energy was immediately apparent through the first few tunes as the Flock sang along enthusiastically with the choruses of “Melting Lights” and “Live it Up.”

Pigeons Playing Ping Pong invited Fritz percussionist Mike Evans onto the stage for a sit-in on their next song, and the calypso-tinged “Fortress” fit like a glove for this collaboration, as the beach vibes spread through the room and euphoria set in for the audience. The band took a sharp turn into psychedelic territory with the jamtronica anthem “Avalanche,” which roared through the club and changed the tone of the show dramatically, kicking the party into a higher gear. Lead guitarist Jeremy Schon’s solos were inspired and furious, building to intense peaks and guiding the energy of this raucous dance party. Throughout the night, the complementary play between Schon and drummer Alex Petropulos was palpable and drove the band’s explorations.

When the band returned for their second set, they kept up the fun and playful feel of the show with “Whoopie,” bobbing their heads in unison through the syncopated instrumental sections. Ben Carrey’s thumping bass lines carried the room at this point, getting the crowd ready to throw down for one more raging set. The surprise highlight of the set came in an unexpected cover, the Disney classic “Hakuna Matata.” This funky rendition segued perfectly into “Moonwalk,” providing another opportunity for Pigeons to showcase the electronic influence in their music and provide another outstanding jam with epic tension and release.

For a band that seems to take pride in its sense of humor, “F.U.” was a fitting way to close out the show and put an exclamation point on an endlessly fun and funky night at 9:30 Club before the band and its Flock would come back to do it all over again less than 24 hours later.

The second night of the run saw the sci-fi Middle Eastern fusion band from New York, Consider the Source, opening. A unique band with a psychedelic mix of sounds  got the crowd warmed up with a fiery set. As Pigeons Playing Ping Pong took the stage to start night two, Greg expressed to the crowd how much this run meant to the band fittingly launching into "Time to Ride." Next up was the mysterious dance jingle "Fox and Toad," followed by "Pop Off" and "Poseidon," all of which had the audience singing along and grooving to the music. "Offshoot" led into the first cover of the night as the band segued seamlessly in and out of "Pink Panther" before finishing the instrumental original.

But the magic of the night was saved for set two. Greg again opened the set with a message about what the 9:30 Club meant to them, having grown up in the DMV, and acknowledged this important milestone for the band of selling out their first two night stand at this historic venue. "We want to do something special," he said, adding that they were going to recreate one of their favorite sets they had played at this venue. Back in 2015 on Halloween night, the crew performed a "Dead Zeppelin" set, mashing up beloved tunes by the Grateful Dead and Led Zeppelin. The band led fans to believe they'd recreate this beloved performance by opening the set briefly with an unfinished version of "Horizon" transitioning into "Eyes of the World." But this night was not Halloween, and since the second set had started shortly after midnight, we had officially slipped into April Fools' Day. The crowd erupted as the band jumped into "War Pigs" and, leaving the classic metal anthem unfinished, played a short version of "Bare Necessities" before returning to finish "Horizon."

That turned the energy level for the rest of the night up to eleven as the band stepped away from the "Dead Zeppelin" fake-out to round out a set of pure Pigeons funk. The encore opened with a new song, aptly titled "Dawn A New Day" before closing out with "Fun in Funk," leaving the show on a perfect note for fans who will no doubt be wanting another PPPPajama party sooner rather than later.

Pigeons will tour the East Coast and the South through April before wrapping up their spring tour with 3-nights at the Brooklyn Bowl. They’ll host their annual Domefest just two weeks later, only a short drive from DC in Bedford, PA. You can also catch them at just about any music festival this summer.

Will Urquhart contributed to this article.​​​​

4. Fortress (with Mikey Spice of The Fritz on percussion)

4. Burning Up My Time

6. Henrietta (with Mikey Spice of The Fritz on percussion) Updated 04/03 at 03:04 PM:  Pigeons Playing Ping Pong have added audio from both nights to nugs.net.