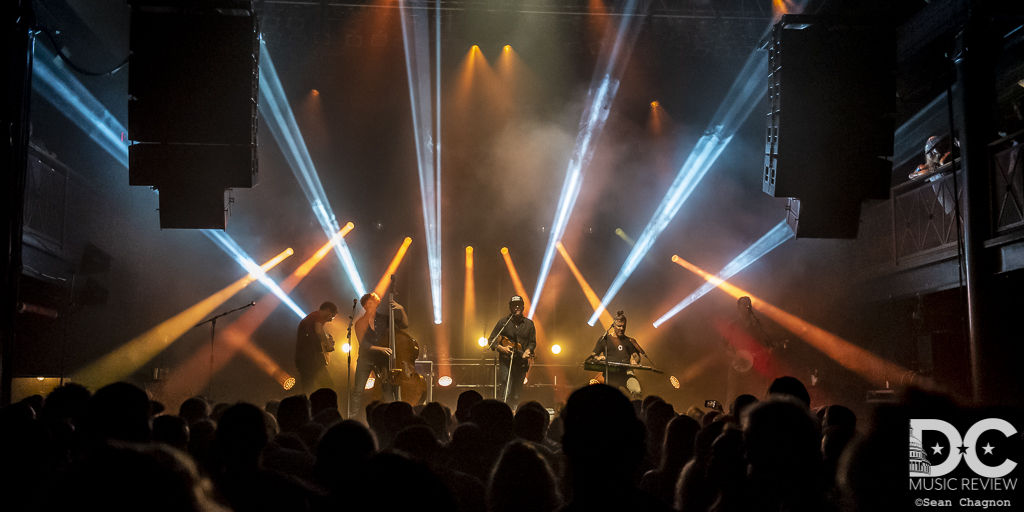 As the full moon rose on Friday the 13th in Norfolk, Virginia, there were quite a few figures lurking in the shadows. Luckily, those figures were the folks diligently working to set up the stage at the NorVa for The Infamous Stringdusters and The Ghost of Paul Revere. The award winning venue was hosting the first stop of the Stringdusters Fall tour after their Spring 2019 release of the album Rise Sun. The Dusters have been a solid presence in the newgrass scene for quite some time and have helped bring it to the forefront of festivals and venues throughout the country. While still maintaining roots in traditional string band music, they have weaved in their own influences and deliver a high energy, uplifting performance accentuated with outstanding lighting design performed by Jason Gutworth. The Dusters put the right foot forward in Norfolk as they step out on their next round of tour dates. Openers, The Ghost of Paul Revere, brought their upbeat style of folk tunes to the stage to warm up the crowd and they did just that. Hailing from Portland, Maine, they take what could be some mellow acoustic tunes and energize it with a rock influence that results in rowdy anthems that are comparable to Nathaniel Ratliffe & the Night Sweats. They are touring heavily throughout the U.S. throught the end of November in support of their new album Monarch which has a release date of October 27. The opening notes from Andy Hall’s dobro took the band into “It’ll Be Alright” and segued it into Appalachia standard “Cluck Ol’ Hen.” With nothing less than the full attention of the crowd, the band began a new fan favorite from the new album, “Planets.” Another highlight was a song fitting for any touring band and a great chorus sing-a-long “The Place That I call Home.” The Dusters finished the first set with a three song run beginning with a cover of the haunting Dylan melody “Senor.” The fun continued into set two with the title track of Rise Sun kicking things off. “Night on the River” followed and was jammed into another Rise Sun sing-a-long track “Carry Me Away.” “Colorado,” a shoutout to one of America’s favorite states, was performed along with a raucous instrumental “Sirens” with Jeremy Garrett sawing like mad on his fiddle. Other highlights of the set were “Black Elk,” another Rise Sun track “Wake the Dead,” and “Blockygrass” to finish the set. In honor of the full moon, the song chosen for the encore was Neil Young’s “Harvest Moon” and was an excellent way to close out the night.

The Stringdusters will be making their way around the country for their second tour supporting the new album. Get out and catch these Grammy Award winning musicians and see what the fuss is all about!