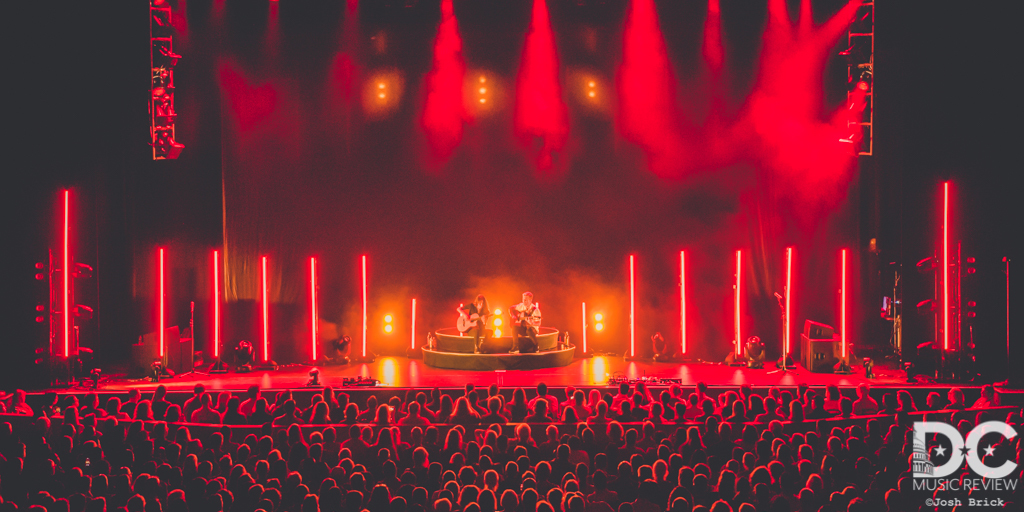 Nothing is impossible. Rodrigo y Gabriela proved such at the Filene Center at Wolf Trap National Park for the Performing Arts on Friday, June 7. They achieved the seemingly unfathomable as they captured the attention of every audience member as they performed their interpretation of the Pink Floyd epic, "Echoes." The Mexican duo took the crowd with them on a nearly 20-minute journey through the cosmos as they meticulously honoroed one of their musical heroes in stunning fashion. It was amazing to watch two musicians (much less on acoustic guitars) command such respect, claiming the collective consciousness of an entire crowd in an outdoor amphitheater. In our day of constant communication, the audience understood the moment. No one risked missing a moment of the greatness before us. We witnessed something truly special.

The virtuosic pair was thrilled to bring new music to Wolf Trap – "one of the best venues in the world," according to Rodrigo. They featured material from their recent release – Mettarevolution – their first album in five years. The crowd sat attentively for much of the 90-minute set as the rock duo explored textured soundscapes, beautifully intertwining the sounds of their acoustic instruments.

Eventually, the guitarists implored the crowd to stand as the sound took a lively turn, returning to some of their earlier material from their 2006 self-titled album. The crowd inside the pavilion roared as Rod y Gab began the tribal "Tamacun," one of their most popular songs. Gabriela provided the uptempo rhythm and percussion on her Yamaha guitar as Rodrigo offered some stellar picking to create their signature, world-class sound.

It was a treat to witness two exemplary guitar players become one with the music and the crowd in a beautiful setting. Rodrigo y Gabriela closed the show with an encore featuring the melodic "Electric Soul" and the energetic "Hanuman," and received a standing ovation from the grateful crowd. The appreciation was mutual, as the rock duo waved to the crowd in an extended farewell. Safe to say that Rod y Gab will return to beautiful Wolf Trap and share their gift with us once again.