Rooster Walk 11: The Rooster Crows to Announce the Beginning of Festival Season 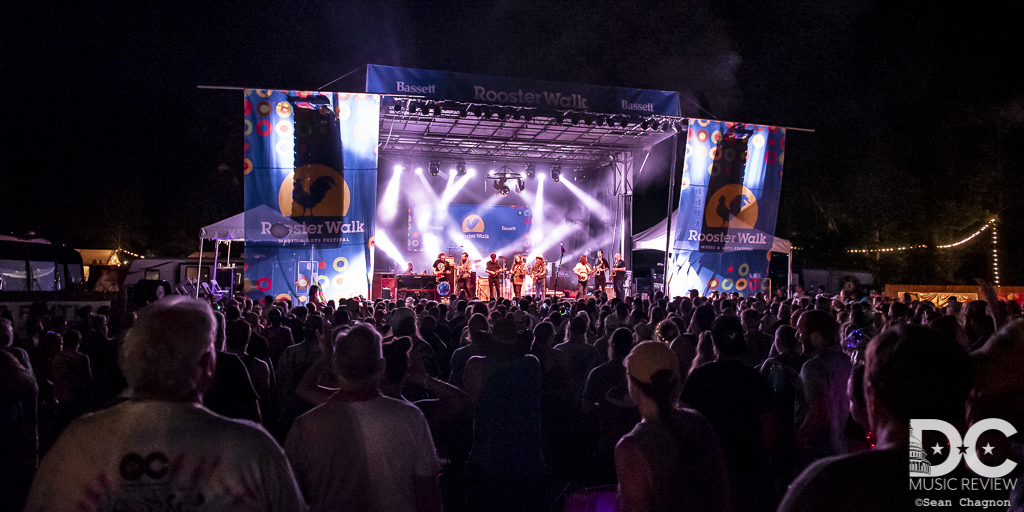 Upon arrival at Pop’s Farm in Axton, Virginia, just outside Martinsville, the tract of land was already buzzing with excitement and smiling faces were abundant. It was a hot sunny day, but that could not contain the excitement of the newly arrived attendees of Rooster Walk 11. Even before the music started on Thursday, there were many people roaming the woods of the Pine Grove Stage scoping out the vendors wares, admiring the art work on display, taking in the smells of the freshly smoked brisket, and testing their balance on the slacklines. Rooster Walk brings some significant names in the music world to their little corner of Virginia, but it is smartly laid out, so it’s a short walk from any campsite to the well located stages. With plenty of shade in the camping areas provided by a plethora of trees, large open green spaces for the stages, and even a scenic lake to top it off, it’s no wonder this festival racks up more alumni every year. The music started that evening and was contained to the Pine Grove stage. It was a good mellow way to start what would be a very busy weekend. Prosperity’s Folly kicked off the festival, followed by The Black Lillies. Multi-year veterans and festival favorites, Yarn, finished the night off with a two hour set. Their upbeat alt-country had everyone dancing in the sand under the pines all night. On top of playing a set of their own music, the group has played an additional themed set the past few years and last year’s theme was “The Last Yaltz,” which was their tribute to The Band’s The Last Waltz. This year was no different and the guys came back out to work their magic on Sunday for a “Yarn Morrison” set. With temperatures breaking the 90 degree fahrenheit mark during the day for the rest of the weekend, people still came out to support the bands with the help of designated tent and sunshade areas and trees surrounding the various stages. Friday’s day sets brought a slew of Virginia bands with an especially heavy lean on Charlottesville and Richmond. Parallel sets gave attendees the chance to get down to some great funk with insane slap bass lines on the Lake Stage with Disco Risque or hang in the pines with Chamomile & Whiskey who bring a rocking Irish infused Americana sound. They say great things come in small packages, and at around 5 feet tall, Adar proved that with her incredible and powerful voice. Kendall Street Company played a fun set of their jam styled tunes on the main stage. South Hill Banks had a fun bluegrass throwdown on the Pine Grove stage which had no shortage of folks dancing and partying with them. Charleston’s Shovels & Rope headlined on the main stage and made one heck of a rauckus for being a duo. Big Something and Turkuaz brought the day to close and had special guests like 16 year old guitar ripper Isaac Hadden and slide virtuoso Roosevelt Collier. Additionally on Friday, two bands relatively unknown to the Rooster Walk crowd created a massive buzz and put themselves all over folks radars for their Saturday sets: C2 & the Brothers Reed and Palm Palm. Both groups strayed from the usual RW style of music and it was welcomed with open arms. Both definitely had a Led Zeppelin rock influence, but neither were carbon copies. Hailing from Kentucky, C2BR has an overwhelming stage presence with energy unbounded. Their set on the VIP stage limited crowd size, but that didn’t hold them back and it payed off for their set the next day. Palm Palm, out of Richmond, Virginia, led by J. Roddy Walston, was another insanely energetic show with phenomenal music as well. These are two must see bands if the chance presents itself! Saturday brought another slew of great music. One of the many highlights of Rooster Walk is many bands play more than one set on different days. For those who missed C2 & the Brothers Reed or Palm Palm, they got to start their day with a bang! There were repeat performances by Chamomile & Whiskey, South Hill Banks, and Kendall Street Company and another offering by the Artists at Large Band. RW brings “Artists at Large” to the festival every year; musicians who share the stage with most of the other acts and play a few shows themselves. The artists this year were RW alumni and incredibly talented Wallace Mullinax and Josh Shilling, along with John Cowan (New Grass Revival), Ed Toth (drummer for Vertical Horizon and Doobie Brothers), and Roosevelt Collier (slide guitar phenom). Saturday also brought plenty more talent in the form of The Lil Smokies with a smoking bluegrass set, The Roosevelt Collier Band, Trongone Band with their sweet southern rock, and The Steel Wheels. Saturday’s headliner, The Marcus King Band, was a few songs into their set when a thunderstorm broke up the party. Luckily, it was short lived and they came back out and crushed the rest of their set with Roosevelt Collier joining Marcus King for a shred session. Galactic brought their New Orleans party to the fest after MKB, and there was a double header late night show with Ghost Light and Runaway Gin playing until 2 a.m. As bittersweet as the last day of any festival is, no one was concentrating on having to go back to reality with the incredible lineup that was in store. The Vegabonds started the day off on the main stage with their brand of alt-country. Other performances throughout the day included Mountain Heart, The Folly, Sierra Hull, and a magic show on the kid’s stage by Hunter Rhodes. At his point, the schedule thinned out to allow everyone to attend some of the major highlights of the weekend. The “Yarn Morrison” set consisted of Yarn performing a purely Van Morrison set (with one of their own at the end for good measure) with special guests Josh Shilling (keys), Lizzy Ross of Violet Bell (vocals), and a horn section to truly round out the sound. Bluegrass phenom Billy Strings was up next and though he looked like he felt a bit under the weather, the band still played a fantastic set of songs both old and new. Steep Canyon Rangers, from Asheville, NC, kept the bluegrass going with an energetic 2 hour set to lead up to Rooster Walk’s crowning jewel, the King and Strings set. Last year was the first time the two guitar virtuosos played together and they had a few hours after first meeting each other to put together a two hour set. They absolutely lit that stage on fire with Billy’s band and Jeff Sipe on drums, so expectations were high for this years collaboration. As high as those expectations may have been, they were all exceeded. This year, the entire Marcus King Band joined in on the fun, including the Royal Horns, and Dean Mitchell even got to break out his pedal steel. A storm blew through one again, but the show went on and it didn’t dampen anyone’s spirits. Highlights from the set were an acoustic version of the classic Summertime, Funky Bitch, Iko Iko, and Spanish Moon. This was a truly unbelievable set of music and was an amazing way to showcase the talents of these two up and coming bands.

Although the fest was over for many, the organizers had one more treat in store for all the people who worked so hard to make it a success. The staff party had a secret show by the Charleston, SC band Sexbruise?. Their music was a complete departure from what had been heard all weekend, and ensured everyone was set to party mode. They introduced autotune to the festival and with fresh pancakes getting flipped off the griddle into crowd and hands getting dunked in a tub of mayonnaise, there was no way thie party could've gotten any wilder. This is one of those “must see to believe” bands and is well worth checking out live if you’re ready to turn the party up to 11.

The folks at Rooster Walk hit another grand slam with the 11th installment of this festival. The location, bands, and people are a perfect recipe for a great weekend. This is certainly one to put  in the calendar for next year!