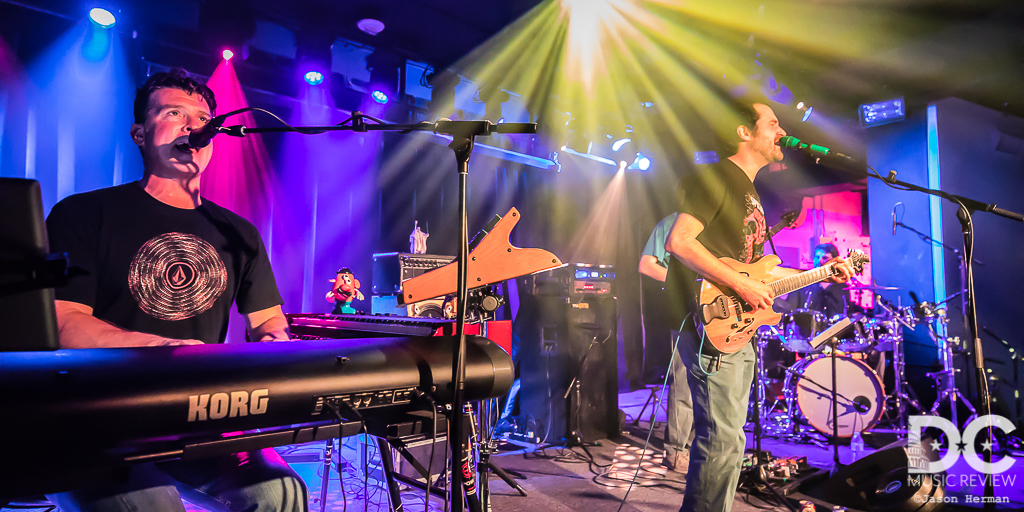 Phish summer tour doesn’t kick off for over a month, but Phans in the DC area were given a taste of the live Phish experience this weekend as Charleston, SC’s Phish tribute band, Runaway Gin, made a stop at Union Stage, playing a great show with fan-favorite tunes, creative set list construction, and engaging jams. Guitarist Andy Greenberg, bassist Bobby Hogg, keyboardist John Fitzgerald, and drummer John Pope each filled the roles of their respective Phish band members exceptionally well, bringing precision to Phish’s complex compositions and creativity to their jams. Kicking off with the Frank Zappa classic, “Peaches En Regalia,” Runaway Gin started the show with high energy and got the crowd dancing right off the bat before segueing into the first Phish original of the show, “Blaze On.” “Runaway Jim” offered the band their first opportunity to stretch their legs into a longer improv exercise, beginning an exploration reminiscent of the “plinko” styling that defined Phish’s sound in 2011 that eventually turned to dark and psychedelic territory with Fitzgerald focusing on his synthesizer while Greenberg played heavily effects laden guitar leads.

The band reached an outstanding peak in the jam out of “Reba” and moving directly into “Lizards.” Following the Gamehendge classic, the band returned to “Reba,” providing the old school whistling ending to cap off the first set highlight. The second set began with a long jam following “Split Open and Melt,” in which the band focused on dissonance and hard rock for what seemed like a jam lasting 15-20 minutes. The rest of the set would provide a run of songs that would make fans go wild if Phish played this set list, featuring “My Friend My Friend,” “You Enjoy Myself,” “Moma Dance,” and “Free.” Closing out the show with “Harry Hood,” Runaway Gin showed the crowd in DC why they’re one of the best Phish tributes touring the US.

Click here to see the setlist for Runaway Gin's performance at Union Stage on May 11, 2018 Runaway Gin played until the 1:30 am venue curfew. If you inspect the setlist above you will notice they had a genuinely ambitious setlist prepared. Everyone left happy and none-the-wiser.