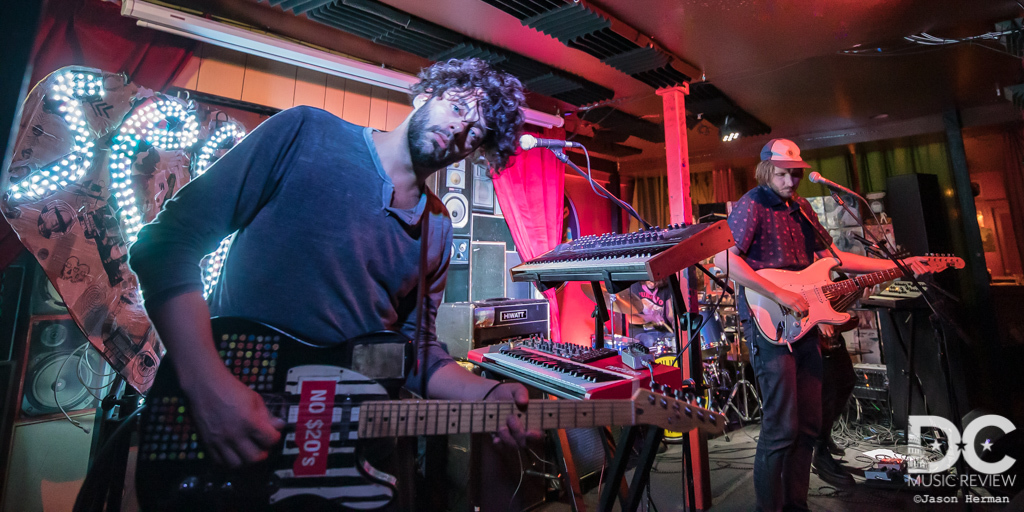 Stuck between identifying as a Utah or LA-based band, Sego feels like the counterculture of both locations.

Playing Songbyrd on Monday, May 6, indie rock band Sego drew an audience full of friends and familiar faces who willingly crowded the front of the stage as soon as frontman Spencer Petersen gestured dramatically. The band immediately established an enthusiastic rapport with the audience, oftentimes dangling themselves offstage in an attempt to make the show as interactive and inclusive as possible. With vocals slightly reminiscent of Ezra Koenig (Vampire Weekend) and Christian Zucconi (Grouplove), Petersen performed in a speak-sing sort of way — a style few can seamlessly pull off. While some unsuccessfully use the style as a cliched trope, Petersen pulls off the lackadaisical style effortlessly.

Sego have a weird and electric energy that engages their audience. Each member of the band brought their own quirk that contributed to the palpability of their energy. Whether it was intense eye contact, dramatized hand gestures, or synced up head-banging, Sego have set themselves apart as a band to look out for.

With a live-performance style that felt more like a staged theater show than a concert, the four-piece band performed with an instrumental style that can only be described as technical, enhanced by enriching lyrics full of self-aware satire and social commentary. Sego play with a wide array of sounds — from animalistic gasps of air in “20 Years Tall”, the cowbell in “The Fringe”, or the rallying chants of "USA!" in "Give Me" — there was always something eye-catching to look at and something groovy to dance to. Petersen and Thomas Carroll (drums) are the founding members of Sego, and later added Brandon McBride (guitar, keyboard) and Alyssa Davey (bassist) for the production and release of their sophomore album Sego Sucks. Their set at Songbyrd spanned tracks from both albums and their handful of EPs, creating a night that exemplified the band’s growth over the past five or so years.

"This is our first time trying to go around the country on our own," Petersen explained breathlessly as Sego took a half breath to appreciate their crowd, "Thank you for being here."

"Sego have a weird and electric energy that engages their audience. Each member of the band brought their own quirk that contributed to the palpability of their energy."

The evening closed with "Neon Me Out," wherein Sego called up members of opening band Chardonnay Boys to join them for the final tune. What resulted was an explosion of guitars and soaring vocals, as Chardonnay Boys added their cool garage rock edge to what felt like a rallying anthem.

Sego’s set was essentially one continuous jam — filled with punk rock, ethereal indie, satire, psychedelic funk, and so much more —  that melded into one wacky and trippy show. The quartet are weird in the best way, and are best suited for those looking for a night of unbridled fun and excitement.