Sleepy Creek SpringDig 2018 – Bigger than Before 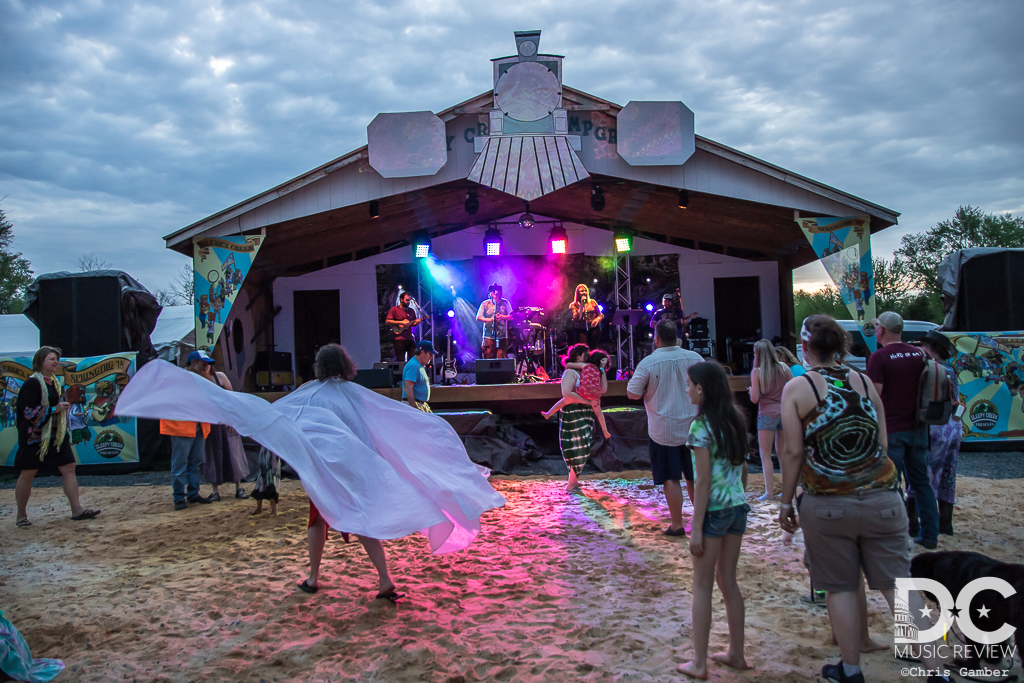 The fifth annual Sleepy Creek Spring Dig festival was held at Sleepy Creek Campground in Berkley Springs, WV on May 4. The four day festival drew a larger crowd than years prior and with it came the campground’s dedicated Spring Dig fans in addition to faithful bluegrass and all around music lovers who came to witness the great acts of national headliners, Jeff Austin and Keller Williams as well as festival hosts, the Brokedown Hustlers. The private campground is a special property nestled into the countryside of West Virginia. The green lush land is framed by the creek that the site is known for, that intersects with the Potomac River, and a railroad, which welcomes guests with frequent passing. The stage itself was set next to the railroad and in front of it laid a make shift dance floor of sand atop gravel ground which gave visitors a tropical and relaxed feel and an extra reason to kick off their dancing shoes for the weekend.

Campers listened from their tents, not far from the stage, as a small audience slowly grew in front of the stage throughout Friday night. Mountain Ride, the groovy bluegrass band from Chambersburg, PA played in the early evening for a thin crowd that danced and swayed to the sweet pickings of the quintet’s funky grass sound.

As the sun set and the train ran along the tracks on a perfectly warm evening, Cousin Earth, a funky, spiritually enlightened and eclectic jam band with ukulele and ukulele bass parts, played to a still sparse crowd. The audience let a range of pleasant emotions wash over them, from laughter to pure joy, as the band played a truly unique and psychedelic mash up of Simpsons soundscapes.

After set break, a crowd larger than before, gathered in front of the stage to behold the sights and sounds of the Brokedown Hustlers. The band’s presence riled up the audience as the two slang banter back and forth throughout the set. The crowd hooted, hollered and stomped their feet during the band’s hilarious hit “Headier Than Thou.” By now, the stage was set and the intimate audience was primed and ready to go for the quirky bluegrass-jam styles of the Jeff Austin Band. Jeff Austin and his players expressed genuine excitement to be in West Virginia for Spring Dig and to say that the audience felt it would be an understatement. The energy between the audience and the band made it feel like everyone was good friends. The players preformed with high-energy that had the audience boot stomping and yelling. The band played a hefty set reaching well over an hour, where they played the original hit “15 Steps” and original Yonder Mountain String Band songs from the albums “Elevation” and “Town by Town.” Jeff Austin laced humorous banter with the crowd in between songs and when the train passed by, he lit up like a light and the whole crowd cracked a grin. A SpringDig tradition, the parade!

Afterwards, the crowd flowed over to the stage’s bonfire pit to boogie to the high-energy Appalachian jam rock sounds of The Kind Thieves under the warm spring night’s sky.

Saturday was sunny and breezy for most of the day, but when the festival’s parade tradition pursued in the early evening, gray clouds threatened music lovers as the clouds danced between the sun and blue sky. Despite this, it didn’t keep the festival-goers away from the parade tradition that includes amusing costumes, noise makers and props as they parade around the Sleepy Creek campground.

The weather conditions didn’t keep music-lovers away from the music either. Though the crowd was sparse on Saturday evening when the funky New Orleans style jam band, Black Masala took the stage, the audience still felt the high-energy vibrations of the eight-piece band that made the audience jive with electricity to their brassy sounds as rain started to pour towards the end of their set. Rain and lighting pursued for most of the night keeping most audience members away and delaying Keller Williams’ sets by hours. Audience members dragged their pop-ups in front of the stage for coverage and to be on alert for Kellers Williams’ performance that had no warning. When Keller Williams finally came on, the audience was warn down from the conditions and late hour, but more than ready for the quality music that were waiting for. Keller Williams had an appropriate amount of energy that matched the crowd’s cold and tired bodies. He started his set with a gentle acoustic intro of “Groove of the Rain.” Afterwards he lifted the audiences’ sleepy energy with a rare, but amusing number, “Short Show”, where he pulled out the loops and got weird with the lyrics to which all of the audience laughed and yelled under their umbrellas. He played an exciting “Mantra,” with loops galore and got the audience singing and bopping to the unique Keller-like beats. Keller Williams was in good spirits and his kind personality showed through his set where he treated the audience to a very intimate and special Keller set where he showed compassion through his music and the audience graciously reciprocated. He ended his 20-minute solo set with a funky “More Than a Little,” for a crowd that grew. He brought out More Than a Little, all of whom had peppy energy, despite the late night, and despite the rain, the audience was so gracious for the music that they thought might not come. The band played late into the night and encored with a funky, peppy and energetic “Hey Ho Jorge.” Following the likes of Keller Williams and More Than a Little, the Dirty Grass Players stuck it out in the rain and so did the audience who continued to party on at 3 a.m. despite it. The Players played under a tent next to the stage’s bonfire for the late night set, giving the audience a chance to stay warm enough to listen to the up and coming Baltimore band.

Sunday came and the rain stayed and despite the weather the campers were sad to depart the magical property and festival of Sleepy Creek SpringDig. Part of what makes this festival so special is the intimacy between the artists and the festival-goers. From vendors to music to the creek, the festival had a relaxing and adventurous vibe and something for everyone. It was the perfect reason and way to escape and disconnect for a weekend to enjoy nature, friends and good music.

As we were reminded by Sleepy Creek near the edge of the campground.