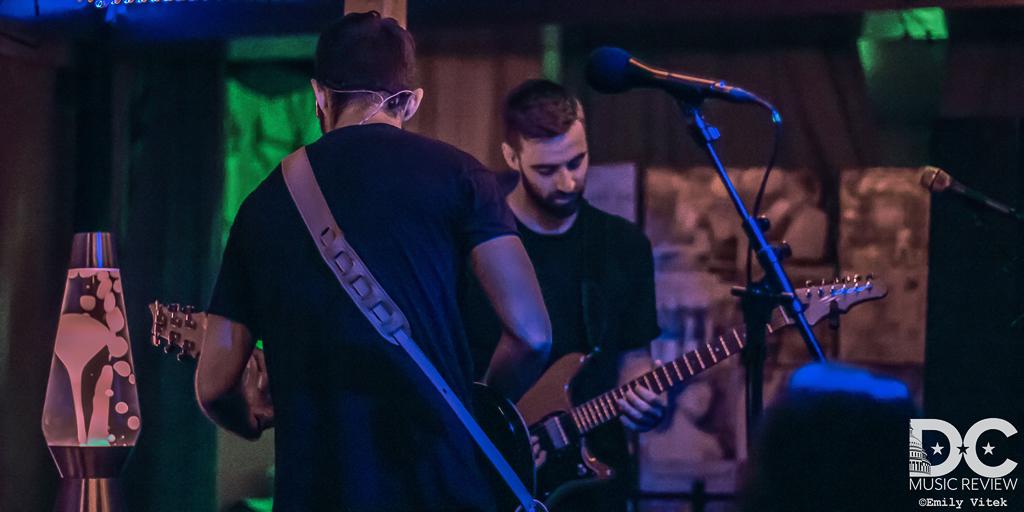 slenderbodies are a breath of fresh air, with a unique, fresh sound that both sounds and feels like rushing water.

Since forming in 2016, the young duo has compiled a stunning discography comprised of two EPs with a third already due to drop early next year. College pals Max Vehuni and Benji Cormack make up the ethereal duo, with Max sporting vocals that are reminiscent of a lower and breathier Justin Vernon, while Benji provides the rich guitar instrumentals. In addition to the surprisingly high energy vibes they emit, the boys play with such a cohesion that you can’t help but be hypnotized by their chemistry, on top of their celestial tunes. Kicking the evening off with a folksy guitar riff, fittingly titled “unnamed intro,” Max and Benji stood head-to-head both gazing down intently, racking up anticipation for their psychedelic and cozy tunes. The crowd, comprised mostly of enthusiastic twenty-somethings, buzzed with excitement, followed quickly by cheers as slenderbodies launched into “blood to gold,” a track off their latest EP fabulist: extended.

slenderbodies are not just heard, but felt and seen, with music that is colorful, geometric, and somehow tangible. When tracks like “the one” and “mirage” rang out, it felt as though the lava lamps decorating the background had combusted, unleashing warm and neon shapes into the open arms of the swaying bodies in the audience.

The vocals on “homestead” felt like a breathier version of an Alvvays track that could’ve had a home in director David Lynch’s Bang Bang Bar in his Twin Peaks universe. Unfortunately, unlike the unnaturally attentive crowd in the Bang Bang Bar, the attendees at Songbyrd weren’t as silent and alert, at times drowning out Max’s soft vocals. Perhaps a seated venue could have offered the band a better platform to exemplify their softer ballads, one where attendees weren’t distracted by eye catching decor, a centrally located bar, or one another.

"slenderbodies are not just heard, but felt and seen, with music that is colorful, geometric, and somehow tangible."

However, despite the occasional lack of power, the energy and positivity the duo radiated was nearly enough to make up for it. In addition to their original tracks, slenderbodies performed a few throwback covers including Britney Spears’s “Toxic,” and a cover of MGMT’s “Electric Feel,” which sounded better than any live rendition I’ve ever heard. More dialed back, yet definitely sexier, slenderbodies’ take on the band’s popular hit felt smooth and more hypnotic, coaxing numerous concertgoers into closing their eyes to allow the psychedelic waves wash over them.

As the setlist progressed, the air thickened as the temperature rose in tandem with the levels of excitement as fan-favorites played back-to-back. When the iconic intro and Max’s falsetto featured in “anemone” rang out, the cheers were deafening. Concertgoers thrust their arms up, swaying and waving, as Max shouted out, “you’re a beautiful ocean!” The hypnotic beats of slenderbodies’ most popular release swirled around, surrounding the audience in a soul-nourishing soundscape.

slenderbodies began their 2018 tour journey in January, opening up for Passion Pit for a sold out crowd at the 9:30 Club. Despite a busy touring schedule, the duo hasn’t stopped creating new music. In addition to their older tracks, slenderbodies debuted a few upcoming singles due to drop in early 2019, including the closing track “kings,” which is scheduled to be their next release. The pair is definitely one to keep a close eye on.

slenderbodies provide a celestial and out-of-body experience that is well-suited for the dance floor, a drive through the countryside, and even the bedroom. They are the chameleons of music — fitting for any occasion.

They set the mood and raise the bar wherever they go.

Click here to see the setlist for slenderbodies's performance at Songbyrd on Thursday, November 1, 2018