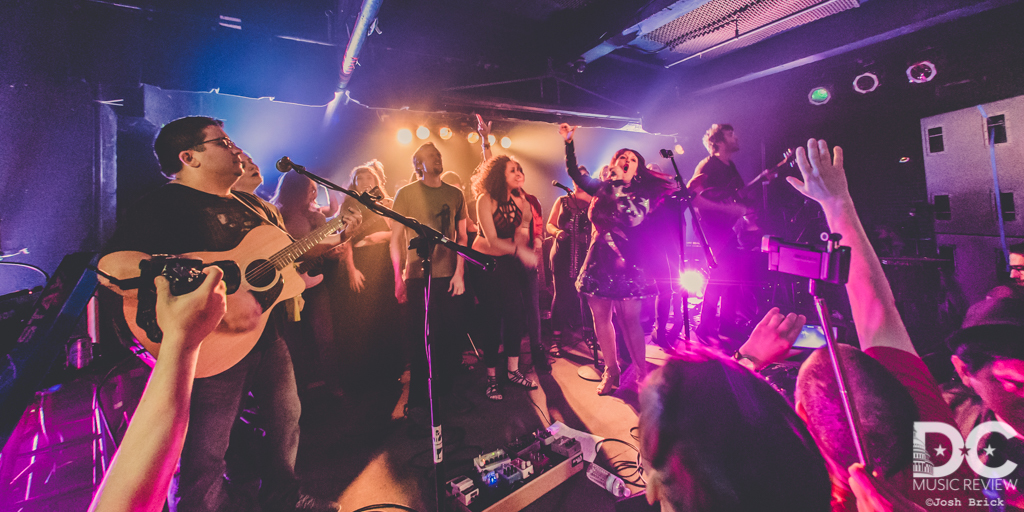 After months of anticipation, rehearsals, and promotion, DC’s own Staycation held their first – soon to be annual – benefit concert for Planned Parenthood of Metropolitan Washington (PPMW) at the Black Cat, with a female-led Radiohead tribute show featuring dozens of DC-based musicians offering their talents throughout the night. Those who have followed DC Music Review’s coverage of this event know that there has been a palpable energy and enthusiasm building around this show, which marks an undeniable peak for the local music scene as collaboration and community impact take center stage.

"There has been a palpable energy and enthusiasm building around this show, which marks an undeniable peak for the local music scene＂ Click To Tweet Stephanie Sasarak, who organized the event along with her husband, Nikhel Sus (guitarist/vocalist of Staycation), reflected on the show saying, “This show just had all the right energy. There was so much love in the room and not only were we able to raise over $6,000 for PPMW, we were able to show off DC’s incredibly diverse music talent.” Nik added, "In our view, the night was a total success on both fronts."

Following an opening set by local rapper Son of Nun, the core group for the evening, calling themselves “Staycation & Friends” kicked off the Radiohead tribute with “Airbag,” the opening track from their 1997 album OK Computer, featuring Covered with Jam’s Sunny Trippel on lead vocals. Over the course of the evening, more than a dozen women and non-binary singers took over the Thom Yorke role in the band, each offering their own unique stage presence and vocal stylings to create a remarkable tribute to the British rock innovators. Among the highlights were reggae-tinged renditions of “Lucky,” featuring Candice Mills, Carly Harvey, and Tula Pisano, and “Climbing Up the Walls” with Mary Lankford, Gordon Sterling, and Gena Photiadis. After closing out their first set with an energetic rendition of “Paranoid Android,” with vocals by Pisano and Stephanie Kaiser, the band took a brief break with a lot more music in store for the rest of the night. The second set kicked off with “2 + 2 = 5” from 2003’s Hail to the Thief, a hard-rocking tune to reignite the crowd for the rest of the show. The tribute lasted for more than three hours in two packed sets of music, with Staycation & Friends leaving the stage entirely at times to allow other bands to take over, including Oh He Dead, fᴏяᴄᴇs, and Nah., with the latter performing outstanding renditions of the psychedelic Kid A opening track, “Everything in its Right Place,” and “Fake Plastic Trees.”

In the spirit of the evening, a representative of PPMW was also given an opportunity to speak on stage, calling attention to recent news stories concerning the Trump administration attempting to restrict doctors from referring their patients to clinics such as Planned Parenthood for their reproductive choices. She also made a call for volunteers and expressed PPMW’s gratitude to Staycation & Friends and all in attendance for supporting the organization, which has been operating in the region for more than 80 years. Be sure to visit PPMW's website to learn more about this incredible organization and cause, as well as to donate or get involved as a volunteer! All told, this benefit concert was magnificently executed. With more than 40 local musicians performing throughout the night, it was remarkable how smooth this show felt, a testament to power of the DC music scene to bring people together to create something truly special. With all the singers joining together during the encore of “Karma Police,” it was a powerful reminder of the importance and value of making this benefit for Planned Parenthood led by women.

After the show, we asked Sasarak about how this show felt, having met her husband Nik after his band pulled out of playing a Planned Parenthood benefit show during their time at College of Charleston. She said, “I had a funny thought about this show coming together over ten years after Nik’s band inadvertently stood me up: if he had not cancelled on me at the last minute, maybe I would not have confronted him at that bar 14 years ago, never married him, and never put on this show. Life is funny - I guess good things come to those who wait.”

Nik, when asked about plans for the future, told DC Music Review, "We’re definitely doing this show annually, in some form, going forward.  It was too special to not do again." He added, "In terms of how to improve it next year, we’ve been discussing mixing in some non-musical elements that tie into the Planned Parenthood cause.  Perhaps involving one of the storytelling groups in town.  But no matter what, we want to showcase this city’s amazing music scene, and capture the same electrifying energy we all generated last Saturday.  In my 20+ years of playing, I’ve never felt anything quite like it!"

There were truly too many fantastic musicians to name them all in this review, but fortunately, you can watch the whole thing right here at DC Music Review! Be sure to check out the full set list and breakdown of each group of performers on Staycation’s Facebook event page. And you can contribute to Planned Parenthood by visiting bit.ly/rh4pp.

"With more than 40 local musicians performing throughout the night, it was remarkable how smooth this show felt, a testament to power of the DC music scene to bring people together to create something truly special＂ Click To Tweet

ALL I NEED - Ara Casey (Honey Kill, The OSYX)

JIGSAW FALLING INTO PLACE - MUNDY (MUNDY and the High Vibes)

GO TO SLEEP - Selena Benally on vocals/guitar (FuzzQueen, More AM Than FM) and Wanda Perkins vocals/drums (The Meer, Maulrat, The Escape Artist)

EXIT MUSIC FOR A FILM - Erin Frisby (FuzzQueen, The OSYX)