Switchfoot Sings in Their “Native Tongue” At the Fillmore 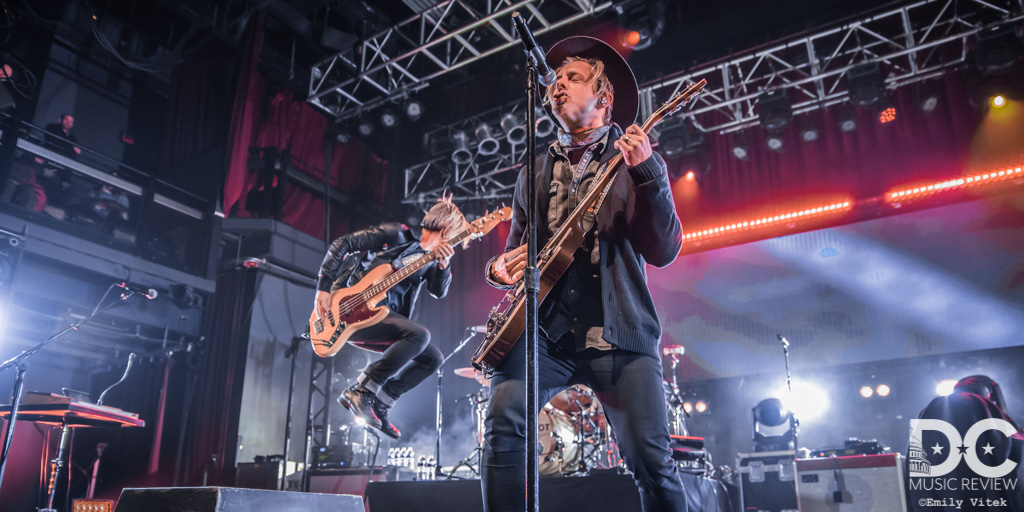 Returning to Silver Spring for the first time since 2016, California rock-band Switchfoot played at The Fillmore on Tuesday during the first week of their “Native Tongue Tour”. Comprised of Jon Foreman (lead vocals, guitar), Tim Foreman (bass guitar), Chad Butler (drums), Jerome Fontamillas (keyboards), and Drew Shirley (guitar) – Switchfoot is best known for their hits “Meant to Live” and “Dare You to Move”. Making music since 1996, Switchfoot had early success within the Christian rock scene due to the religious themes found in some of their lyrics. They gained mainstream attention after the release of the 2002 movie A Walk to Remember, which featured four of their songs including a cover of “Only Hope” by actress Mandy Moore.

In December 2017, a little over a year after the release of their 10th album, Where the Light Shines Through, Switchfoot released a statement saying that for the first time in twenty years they would be going on hiatus. Ten months later in October 2018, they announced the release of their eleventh album, Native Tongue. Released in January 2019 just a few weeks before the tour kicked off, Native Tongue has been a success in Billboard’s charts, earning number five in the US Top Alternative Albums and number four in the US Top Rock Albums. Recorded in their home town of San Diego, the 14-song album includes collaborations with Brent Kutzle of OneRepublic and alt-pop singer Kaela Sinclair.

“These are polarizing times, where the loudest voice is often the voice of anger or fear. This album is an attempt to sing that hope into life. To bring a group of diverse songs under one common banner. Hatred is not your native language. Love is your Native Tongue.” Accompanying Switchfoot on the “Native Tongue Tour” were singer-songwriter Tyson Motsenbocker and indie-rock band Colony House. Tyson opened up the evening with an acoustic set with songs off his 2016 album Letters to Lost Loves. Colony House ramped up the energy with a lively performance including songs off their 2017 album Only the Lonely.

Backed by a large screen displaying behind the scenes clips of the band, Switchfoot opened their set with the guitar-heavy “Let it Happen”, the first track off Native Tongue. Next up they performed their hit song “Meant to Live”, which currently has over 27 million plays on Spotify. The set included other new songs off Native Tongue including “Voices” and “Take My Fire”.  Numerous times throughout the evening, Jon jumped off of the stage into the crowd to sing with the audience and break the barrier between performer and audience. Pausing to share with the audience his appreciation for his band mates, Jon expressed the honor he felt to be able to perform with his brother and the rest of the band each night. Introducing the song “I Won’t Let You Go”, Jon explained the versatility of the song saying how some fans have walked down the aisle to it while others have performed it at a funeral.

Halfway through the evening, Switchfoot exited the stage and walked to the back of the venue with instruments in tow. Standing on a small platform surrounded by fans, they performed acoustic versions of “Hello Hurricane”, “The Shadow Proves the Sunshine”, and “All I Need”.  Taking a break from what had been an otherwise high energy set, the intimate acoustic performances had fans swaying back and forth while singing along. Once returning to the main stage, Switchfoot gave fans performances of “Float”, “Needle and Haystack Life”, “Prodigal Soul”, and “Dare You to Move”. Returning for an encore, the band played “Native Tongue” while Jon held up a flag saying “Love is our native tongue” featuring the band’s iconic star symbol. Jon invited Tyson Motsenbocker and Colony House on stage before talking about his love for UK artists as a child and how The Beatles in particular were one of his favorites. Linked together on stage, Jon along with Tyson and Colony House front-man Caleb Chapman swayed side to side while performing a cover of “Hey Jude”. The rest of the band members were all smiles while they stood together playing their respective instruments.

Ending the evening with “Where I Belong”, Switchfoot finished the evening with their song connected to the C.S. Lewis quote, “If we find ourselves with a desire that nothing in this world can satisfy, the most probable explanation is that we were made for another world.” Although the song has biblical ties, all fans connected to the idea of searching for their place in the world while confetti rained down from the ceiling.

The Native Tongue Tour continues through mid-April where Switchfoot will play over 40 shows across the United States and Canada. Due to a snowstorm, Switchfoot canceled their Philadelphia date on February 20th and rescheduled it for August 3rd, 2019. If you were not able to attend the show in Silver Spring, you can see them later this summer in Philly. Check out the music video for “Voices” below, and you can listen to the full Native Tongue album now on all major streaming platforms.

Click here to see the setlist for Switchfoot's performance at The Fillmore Silver Spring on February 19th, 2019

8. If the House Burns Down Tonight

9. Love Alone Is Worth the Fight

11.  The Shadow Proves The Sunshine