The Force is Strong with TAUK at Debut Headlining 9:30 Club Show 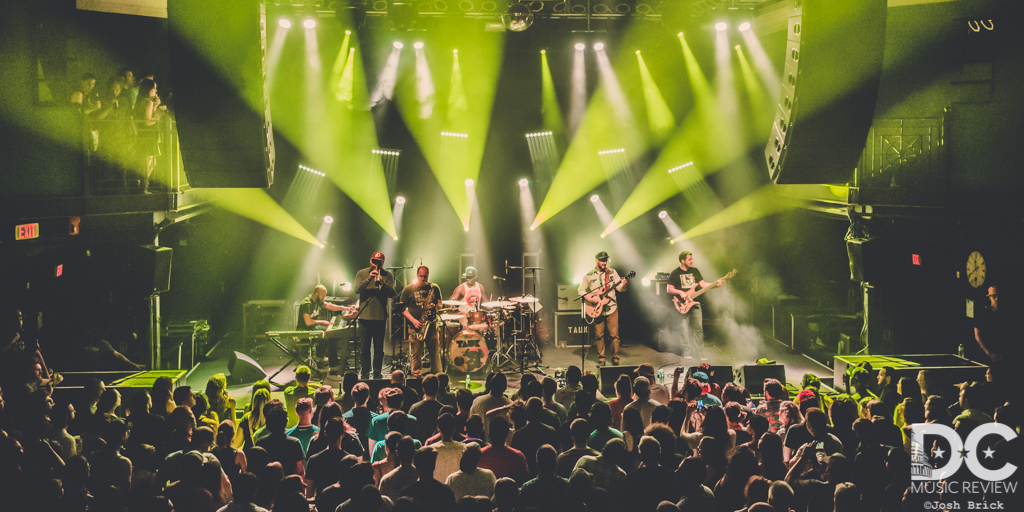 Instrumental jam titans, TAUK, returned to DC on Friday, May 4 for their debut headlining gig at the legendary 9:30 Club. They did not disappoint. The band is no stranger to the venue, having opened for Lettuce in January 2017. This time, they played two powerful sets that included a double dose of horns, featuring Mario D'Ambrosio (Yellow Dubmarine) on sax and Joe Herrera (Thievery Corporation)
on trumpet.

The New York natives have been on a steady rise on the jam circuit since their 2014 release, Collisions. TAUK has played at a bevy of DC-area venues since then, including Gypsy Sally's, Jammin' Java, Echostage, Baltimore Soundstage, Rams Head Live and most recently The Anthem, opening for The Disco Biscuits. Their distinct sound, self-described as "heavy instrumental rock fusion" has captured audiences nationally and they are only getting better. Friday marked another breakthrough and the band made it count. The first set featured a pair of songs – "Horizon" and "Rainwalk" – from their 2016 release, Sir Nebula, followed by a new tune, "Cocoa Butter." Following "Pioneer" and "Tumbler," TAUK welcomed the horns for an impressive set closing trio. Isaac Teel (drums) took the rare vocal lead on Earth Wind and Fire's "Shining Star" that included a great sax solo by D'Ambrosio. The horns settled in and the energy from the stage was lifted during the first set closer, a cover from the Kill Bill soundtrack, "Battle Without Honor or Humanity." After setbreak, TAUK didn't mess around, coming out with the sonic rocker, "Program Select." The band hit the groove instantly as Charlie Dolan (bass) and Teel were visibly locked in. Matt Jalbert (guitar) displayed his tone mastery with a significantly stretched out solo that included some wild bends as Alric "A.C." Carter (keys) laid down beautiful soundscapes underneath. TAUK was in their element from there on out. Next came
"The Spot" off the band's 2013 release, Homunculus, and shit got heavy. The tune showcased the band's cohesiveness and affinity for beautiful melodies before entering a meaty jam section that peaked with a vengeance. The band entered the next level and they weren't turning back. Next came "In the Basement of the Alamo," one of TAUK's most powerful songs. In no rush, the band slowly built up the escalating intro before settling into  an impressive exploratory journey. The crowd was most definitely taken to "the basement" as the quartet delved into a mind-bending jam section that seemed to eclipse the point of no return before returning to the song's main riff. After "Side Project," TAUK once again was joined by D'Ambrosio and Herrera for a take on the spacey reggae number, "Premises," off the band's recent EP release, Shapeshifter I: Construct. They followed with another tune off the EP, "Malware," before entering into the angsty rocker, "The Chemist" to close out an epic second set.

The crowd wanted more and the band obliged, returning to the stage with the horns for one last jam. The power was palpable as TAUK unleashed  "Collateral," the ultimate show stopper. This rendition would prove unique as the band paid their respects to the unofficial Star Wars' holiday and segued into a rollicking "Imperial March." Light Director John Olsen had some fun and treated the crowd to his version of a lightsaber battle as TAUK sent the crowd off with a proper "May The Fourth" be with you. The force is definitely with TAUK and we are lucky to witness their ascension to warp speed.

TAUK returns to its home state for a pair of shows at Brooklyn Bowl on May 18-19 before hitting the summer music festival circuit including Rooster Walk Music & Arts Festival, Summercamp Music Festival, Camp Bisco, The Big What? and more. Check out all of their upcoming tour dates here.

In the Basement of the Alamo