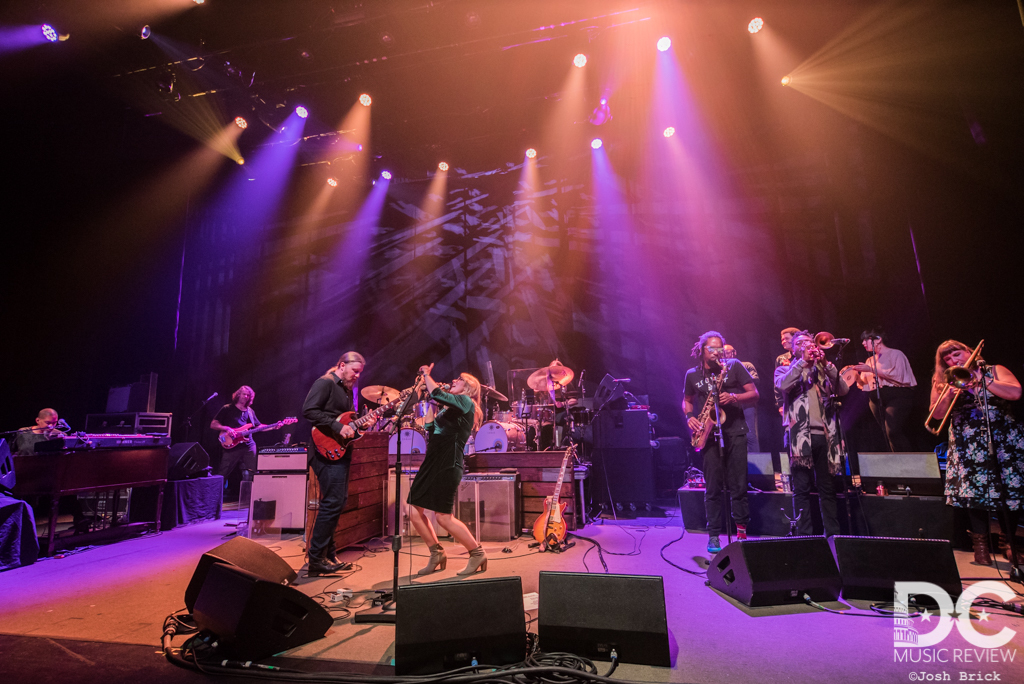 For the seventh consecutive year, Tedeschi Trucks Band (TTB) descended on DC to bring their unique and powerful sound to the Warner Theatre. The 12-piece band, led by Susan Tedeschi and Derek Trucks, treated fans to two raucous shows, completing the first leg of four sold-out shows over a span of two weekends in the district. Since 2012, Tedeschi Trucks Band has repeatedly wowed crowds at The Warner and this year seems particularly special. Friday night started strong with 'Don't Let Me Slide', from the band's 2011 debut, Revelator, followed by a rousing take of 'Laugh About it.' Next was a great rendition of Leonard Cohen's 'Bird On a Wire,' featuring an impressive vocal display from Tedeschi, Mark Rivers (vocals), Mike Mattison (vocals) and Alecia Chakour (vocals). The first set rolled on with the somewhat rare 'Part of Me,' followed by a blistering version of Elmore James' 'The Sky is Crying' in which Susan unleashed a fiery guitar solo to the delight of the crowd. Mattison sang lead vocals on 'Crying Over You', leading into another vocal spotlight for Susan on Bob Dylan's 'Don't Think Twice It's Alright.' The first set ended with an extended rendition of 'Let Me Get By', the title-track off the band's 2016 album. JJ Johnson (drums) and Tyler Greenwell (drums) led the set closer with an extended intro which then featured Kofi Burbridge (keys, flute) on the organ.

After halftime, TTB came out of the gates with an explosive 'Statesboro Blues' (Allman Brothers Band)  in which Trucks emulated the great Duane Allman, putting his slide prowess on display. Next was the popular 'Don't Know What it Means' which featured an enjoyable spastic solo by Kebbi Williams (saxophone).  The crowd was treated to an inspired 'Midnight in Harlem' that included an extended intro by Trucks with hints of 'Little Martha'. The second set featured a relatively new song, 'Shame,'  expected to be on the band's upcoming album. Mattison returned to the front of the stage for a stirring take on Billy Taylor's 'I Wish I Knew How It Would Feel Yo Be Free.'

The band took a short encore break and returned to the stage to close  the night with two covers. First was a tribute to the late Tom Petty, with Tedeschi playing harmonica on 'You Don't Know How it Feels.' The band closed with their take on Joe Cocker's 'Space Captain', with Elizabeth Lea (trombone) exciting the crowd with a powerful outro solo.  The crowd showed appreciation for the 12-piece band, eagerly awaiting the band's performance in less than 24 hours.

Click here to see the setlist for Tedeschi Trucks Band's performance at The Warner Theatre in Washington, DC on Friday, February 9, 2018

2. Don't Know What It Means

7. I Wish I Knew How It Would Feel to Be Free (Billy Taylor cover)

1. You Don't Know How It Feels (Tom Petty cover) Tedeschi Trucks Band returned on Saturday night for the second of four performances in DC. The crowd was buzzing in anticipation for two more TTB sets at The Warner Theater. The band opened with the oft-paired duo of 'Anyhow' and 'Do I Look Worried.' First set highlights included a high-energy rendition of Sleepy John Estes' 'Leaving Trunk' featuring Mike Mattison on vocals. The song morphed into Rahsaan Roland Kirk's 'Volunteered Slavery', previously covered by the Derek Trucks Band, before Susan and Derek teamed up and created TTB. An extended performance of 'Idle Wind' closed out the first set, which included a foray into Nusrat Fateh Ali Khan's 'Sahib Teri Bandi/Maki Madni' as Derek tested the limit's of his signature Gibson' SG. The second set featured some choice covers, beginning with Stevie Wonder's 'Love Having You Around,' followed by Neil Young's 'Alabama.' Mike Mattison returned to lead vocals on a blistering 'Get What You Deserve' and the band was firing on all cylinders. Mattison maintained his position at the front of the stage, joined by Tedeschi and Chakour for a heartfelt cover of George Jones' 'Color of the Blues'. The only repeat from Friday's set list was 'Shame', with the band stretching out the center portion of the tune as Trucks teased the Allman Brothers Band's 'Whipping Post' during the outro jam.

Following a take on B.B. King's 'How Blue Can You Get?' the band was primed for an explosive conclusion of Saturday's show. The band echoed the crowd's sentiment and closed the second set with the rocking 'I Want More.' The train was rolling as Trucks laid into some serious guitar riffs, serious enough to snap a string mid-solo. No stranger to this, the guitar guru calmly handed the lead to Burbridge as he restrung his Gibson before seamlessly transitioning into the Santana classic, 'Soul Sacrifice.'

'Bound for Glory' - Recorded by edtyre


The lively crowd welcomed the band back for what would prove to be an unforgettable encore. Burbridge and Trucks began the intro to the traditional 'Will The Circle Be Unbroken,' as Tedeschi prepared to belt some serious vocals to the delight of the crowd. 'Bound For Glory' was next, one of Tedeschi Trucks Band's signature songs since its inception in 2011. This rendition proved to be special, as Tim Lefebvre (bass) dropped into an impromptu groove with Burbridge dancing on top with a marvelous organ solo. The band returned to the main harmony as Trucks unleashed with a fervor that would make many guitarists jealous. The crowd in The Warner became one, clapping along, as Chakour once more put on an incredible vocal display. The excitement was palpable as she implored "Can you feel it?" as the audience was indeed, glory bound. DC will be treated once again this Friday for a third serving of one of the best touring bands in the world. And yes, we all want more.

Click here to see the setlist for Tedeschi Trucks Band's performance at The Warner Theatre in Washington, DC on Saturday, February 10, 2018

2. Do I Look Worried

1. Love Having You Around (Stevie Wonder cover)

4. Get What You Deserve (The Derek Trucks Band cover)

7. How Blue Can You Get? (Johnny Moore's Three Blazers cover)

1. Will the Circle Be Unbroken? The Afterparty: The Ron Holloway Band

Ron Holloway's afterparties at The Hamilton have quickly become a staple of Tedeschi Trucks Band's DC runs. The Ron Holloway Band puts on a rocking late night show and you never know who might show up. On Saturday, we saw appearances by Mark Rivers, Ephraim Owens, and Kebbi Williams of TTB. Later in the night, Jenny Langer and Rachel Ann Morgan were joined on vocals by Sunny Trippel and Mary Lankford, making for a powerful quartet of women.

The band sounded especially funky on Saturday night, with Christopher Brown (bass) dropping some bombs to the delight of the energetic crowd. Holloway's tenor saxophone rang clear throughout one of the best music rooms in DC. His sax duel with Williams was especially entertaining, each displaying their unique style on stage. The vocal display was prominent, wowing the crowd with fantastic harmonies throughout the late morning hours in the district.

The band returns to The Hamilton this Friday, February 16, to close out their pair of late night affairs at The Hamilton. Don't miss out on the next show as there could be more familiar faces to grace the stage.

More Coverage At The Warner Theatre