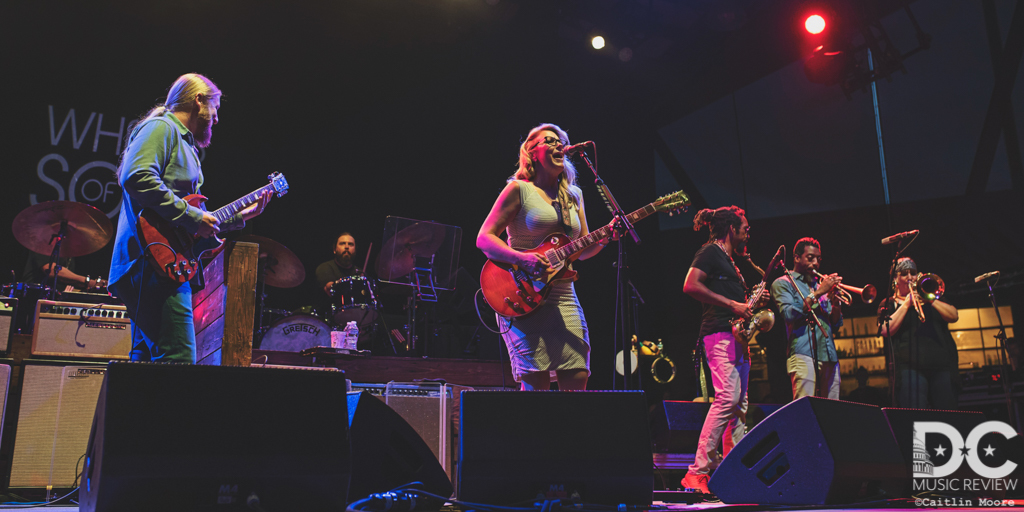 The Tedeschi Trucks Band (TTB) treated fans to a wet and wild rock show at Charlotte Metro Credit Union Amphitheater in North Carolina on Sunday, July 15. The 2018 Wheels of Soul tour featuring the Drive-By Truckers (DBT) and The Marcus King Band (MKB) had stops in Raleigh and Atlanta after their midweek show at Wolftrap (article here), before making a pit stop in Charlotte to close out the week.

Happy to be back in the Carolinas, The Marcus King Band opened the evening with a high-energy set, despite the warm temperatures. The band demonstrated their versatility with tunes including 'Ain't Nothing Wrong With That' and 'Plant Your Corn Early.' The Drive-By Truckers followed with a fine set of rock and roll to warm up the stage for TTB. Minutes before the 12-piece ensemble took the stage, a steady drizzle began and proved to be a sign of things to come. Despite a brief respite, the rain came down in bunches for a majority of the headliners' set but did not deter the crowd. Instead, Tedeschi Trucks Band upped the ante with a powerful set that included an intense 'Tell The Truth' cover by Derek and the Dominoes, a massive Idle Wind, and a fitting The Storm > Whipping Post (The Allman Brothers Band). Marcus King joined the group for the encore, a rousing take on Joe Tex's 'Show Me' to send off the wet yet grateful crowd.