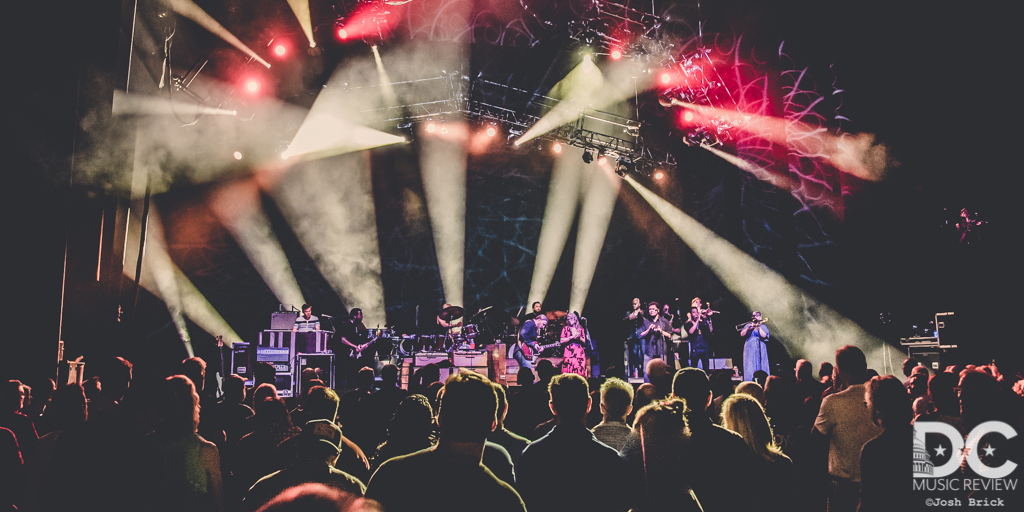 They day began as one of the hottest of the week, and finished with a powerful showing by Tedeschi Trucks Band at Wolf Trap's Filene Center.  Last Wednesday, after a thundering storm rolled through the area, a sold-out crowd enjoyed the annual Wheels Of Soul tour following opening performances by Shovels and Rope and Blackberry Smoke. Once again, the 12-piece super band, led by Susan Tedeschi and Derek Trucks, demonstrated why they are one of the most captivating and musically talented bands on the road right now. The show had many highlights, including the set openers, "Anyhow," from the band's 2016 release, Let Me Get By and the apropos "Border Song," by Elton John. From there, the band launched into two tunes from their latest album including "Still Your Mind," an edgy rocker featuring a fiery solo from Trucks, followed by the rollicking title track "Signs, High Times."

Other highlights of TTB's extended set included a take on The Allman Brothers' Band "Don't Keep Me Wonderin'" that featured a rousing intro by Elizabeth Lea on trombone before Gabe Dixon (keyboards) provided some impressive vocal chops. The pairing of "Shame" into "Midnight in Harlem" was an impressive back to back sequence of two powerful songs and showcased Tedeschi's unrivaled vocal prowess. After an extended intro by Trucks - known as the "Swamp Raga," Kebbi Williams helped build the anticipation with some beautiful tenor saxophone. The fan-favorite tune always commands the audience's attention as Trucks weaved his intricate web of vocal phrasing – all building up to the epic peak that only Derek can achieve. The band welcomed Charlie Starr of Blackberry Smoke for a rousing take on the blues standard, Key to the Highway and featured an impressive guitar lick trade-off between he, Tedeschi and Trucks. After a short encore break, the capacity crowd hollered for more and TTB delivered with Billy Taylor's "I Wish I Knew How It Would Feel To Be Free." Mike Mattison's raspy vocals hit the note before Alecia Chakour and Mark Rivers traded a vocal call-and-response as the band brought the show to a close on a sweltering night in Virginia.

The band continues their tour with a pair of shows at Red Rocks Amphitheatre this weekend and rolls through the southeast before closing with headlining sets at LOCKN' Festival.

6. Anyday (Derek and the Dominos cover)

11. Key to the Highway (Charles Segar cover) (with Charlie Starr of Blackberry Smoke)

12. I Wish I Knew How It Would Feel to Be Free (Billy Taylor cover)