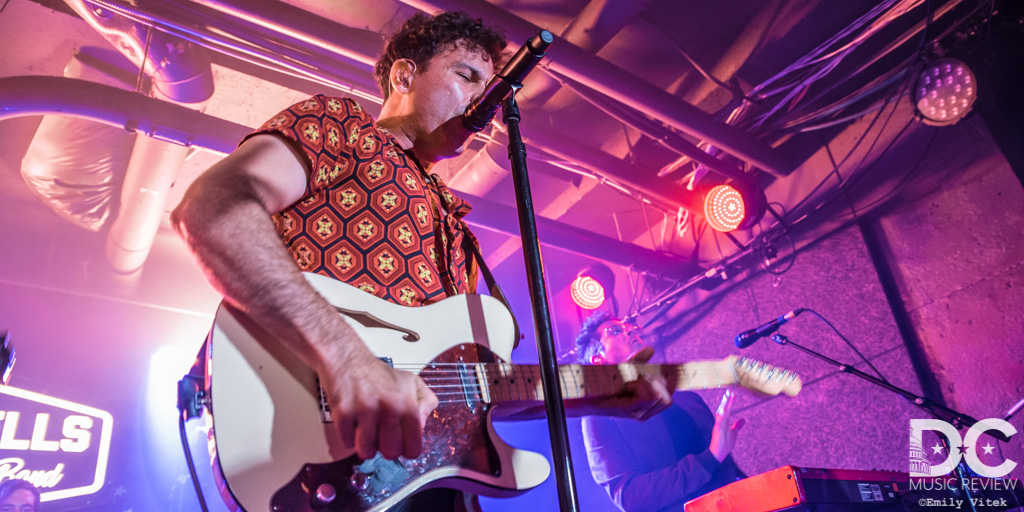 ​If you caught our interview with lead singer Max Kerman last week, you know that The Arkells have performed at a wide variety of events.  Everything from Lollapalooza, to the NHL Awards and even for Team Canada at the Olympics in Korea.  After seeing them live at U Street Music Hall Friday night, it's easy to see why it seems like they're invited to every party - it's because they are the party! A sold-out crowd sheltered from the elements inside the dark and sometimes obscure venue Friday night while celebrating the band's latest album and tour Rally Cry at it's stop in the Nation's Capital.   The Arkells have made a huge name for themselves in their homeland of Canada as well as in the US and around the world and it's easy to see why.  The band took major advantage of the smaller scale venue to really interact with their audience, which it seems that they are pretty well known for doing.

​As early as the second song, Max was already out in the crowd, getting up close and personal with fans.  Creating a very personal show for its DC audience, the band referenced the area many a time.  From inviting folks to join them in a protest at the White House if they wanted, to talking about taking a swim in the Potomac, the band never forgot where they were and let the audience know they were excited about it.  They mentioned several times throughout the show that while it seemed as though they were bad mouthing our leader, especially in songs like "People's Champ" that they did indeed come in peace and the three rules of the night were simple: sing, dance and take care of each other - a message that the quintet hoped ​people would carry with them after the show ended. The energy ran high the entirety of the show with a large amount of hands marked with X's up in the air all set.  The same excitement came from the stage as well with members hopping up and down and giving ticket holders their all.  With some of the biggest festivals in music under their belts, the love and recognition that they have for their fan base is pretty commendable.  At one point, a fan named Mark, who had apparently previously messaged them saying that he knew how to play all their songs on his saxophone, was invited to the stage.  "We told him to bring his sax and be ready and he was!" noted Max.  They also talked about their toll free number that fans can call and leave a message for song requests at the show they will be attending.  Playing one such message, they then invited the fan and her girlfriend onstage to really enjoy their request of "Dirty Blonde" from the 2014 album High Noon. ​​While there were a significant amount of younger fans in attendance, the crowd really was inclusive of just about every age group and the majority seemed to know every word to every song.  U Street Music Hall itself provided a great atmosphere for the type of band The Arkells ​turned out to be - one that wants to rage but also be able to get down with the crowd and interact face to face.  It's pretty easy to see how this band became so big and why people enjoy seeing them live so much.  Check out the rest of the tour dates, scheduled through the end of the month here.​​​

Click here to see the setlist for Arkells' performance at U Street Music Hall on March 1st, 2019