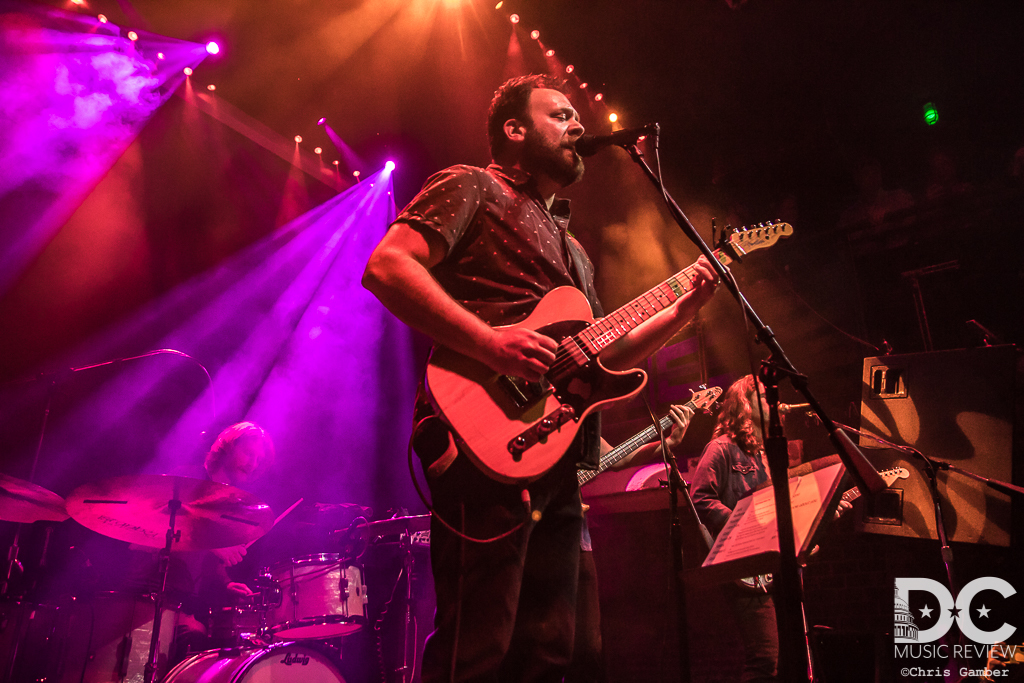 Saturday, May 19 was a steamy night in Baltimore City. In addition to the lifting fog after days of endless rain finally came to a halt, The Cris Jacobs band burned down the coziest music club in Federal Hill with two smoking hot sets. This show was the third and final of a three-night mini tour celebrating the 40th birthday of frontman Cris Jacobs, and what a celebration indeed! Jacobs is no stranger to sold-out crowds at The 8x10, and how fitting to do it yet again while proving to his loyal fans that there is much more to come from this multi-talented musician and his “bad ass band” as he declared that very evening. For the past two decades Jacobs has been entertaining audiences both solo and with well renowned Baltimore based bands The Bridge and Smooth Kentucky before forming The Cris Jacobs Band in 2011. Since the inception, the band has had several different collaborations of members, but the diversity and tightness of this particular collaboration is unprecedented, even drawing national recognition in Rolling Stone magazine in 2017. I cannot say enough about the authenticity and raw talent of each member of this extraordinary band including Cris Jacobs (guitar, lead vocals), Jonathan Sloane (guitar/vocals), Dusty Ray Simmons (drums/vocals) and Todd Herrington (Bass/vocals). The Cris Jacobs Band lighting up the room

As the lights dimmed and the band took the stage, the audience roared with excitement. Right from the start, there was a funky bass line from Todd Herrington that lead straight into "Jack the Whistle and the Hammer" off Jacobs 2016 album titled Dust to Gold. The spectators immediately began bopping around to the fast-paced tune which abruptly ended...or did it? After a stiff break, Jacobs broke into an insane guitar solo which finished out the tune, before delving into the much more bluesy feeling "Mamma was a Redbone" with its catchy beat and Hendrix-esque guitar licks. Next, Jacobs showcased his beautiful vocals with the slower, more melancholy corded song "Hallelujah Hustler" before declaring to his on-lookers "feels like you guys came to party tonight." Afterwards, the band covered the Jerry Reed country classic "I Don't Know About You" before Jacobs changed out his standard guitar for the highly demanded cigar box guitar for the first time of the night. Drummer Dusty Ray Simmons traded one of his drumsticks for a tambourine, and the jamming ensued with the song “Dust to Gold.” This song gave the amped-up audience a glimpse of what was to come the rest of the night with the heaviest most hard-hitting jam of the set so far. As I looked around, the entire room was banging their heads to the rhythm as Jacobs’ signature voice melted through the high pitched tones of the cigar box. Next, we heard the catchy and upbeat ditty “Queen Bee” followed by “The Stakes” which soared into a really psychedelic sounding jam with another flavorful guitar solo by Jacobs that put the crowd in complete awe. Then it got funky with “Hoopee River Bottomland” which had the whole spring loaded dance floor of the 8x10 bouncing as people stomped their feet to the beat. Slowing down the pace, the band mellowed things out with a beautiful ballad and my personal favorite of the night called “Be My Stars”, which asserted that Jacobs singing/songwriting skills are just as impressive as his guitar playing. The set started to wind down with “Past My Prime” which reminded me of a Tom Petty tune, and closed on a high note that brought the house down with the hard-hitting “Stoned on You.” The applause and cheers of approval spilled out into the streets of Federal Hill, and there was no doubt that set number two was going to be blazing hot. After a short break, Kenny Liner of The Bridge brought Jacobs onto the stage, and the two announced that The Bridge would be rejoining for three special performances on June 21, 22, and 23, recreating three of their historic shows from the 8x10 club. This announcement was a gift in itself for many of the dedicated Bridge fans in the crowd and the hoots and smiles that followed were infectious. Liner then brought out Jacobs wife, sister, and parents as well as Abigail Jensens (the owner/operator of the 8x10) along with a birthday cake, and the entire room sang Happy Birthday to the leader of the band.
The second set started more smoldering than the first and escalated throughout the night. Every song that was played had a unique jam, and every jam was absolutely contagious! Songs such as “Bone Digger” and “The Devil or Jesse James” had the spectators burning holes in their shoes. A few songs into the set, Jacobs announced that the band will be making a new record and started into a softer tune that will be on it called “Break Your Fall,” which instantly reminded me of his Smooth Kentucky days with its styling. Shortly afterwards he again pulled out the cigar box guitar for the outlaw country sounding “God’s Gonna Cut You Down” before going solo for "God Only Knows" and the fastest version I've ever heard of the Grateful Dead's "Samson and Delilah." As the rest of the band reconvened on stage, Jacobs thanked the audience and stated "this is a wonderful celebration", before the band burst into a super funky cover of The Meters "It Ain't No Use". To finish the outstanding set, they played The Bridge classic "Bad Locomotive" which was received happily by the many loyal Bridge followers who were present. Once again the stomping and cheering for more could be heard clearly on E. Cross Street and after a few moments the band rejoined on stage for a funky two-song encore of "Shine Your Weary Light" and a cool cover of Levon Helms "Got Me a Women". Todd Herrington and Jonathan Sloane of The Cris Jacobs Band

It was apparent that each musician in this line-up has been shaped by many different genres of music and it all magically melted together. Throughout the eclectic mix were influences of rock, blues, folk, bluegrass, funk, and soul. With a sound as recognizable as that of Aaron Neville or Ray LaMontayne, Jacobs, in my opinion, is the best "voice" to ever come out of Baltimore, and his guitar skills shine just as bright as his angelic voice. But I assure you, the rest of this band deserves as many accolades. Jonathan Sloanes' guitar playing is just as stellar as Jacobs. I'd personally recommend checking out his other bands, The Jonathan Sloane Trio and Yellow Dubmarine. Dusty Ray Simmons is my new favorite drummer of all time, (and I didn't have one before). Todd Herrington's bass playing is so outstanding that I will soon be checking him out in his other groups Trongone Band, DJ Williams Project and Modern Groove Syndicate. The talent, energy, and originality these guys brought to the stage wouldn't disappoint any music fan in the least. It was certainly the best 40th birthday party I have ever attended! Happy Birthday Cris Jacobs, may you continue to shine your light bright for years to come.