Concert Reviews
Made in The DMV
By Nina Goodman / November 6, 2019 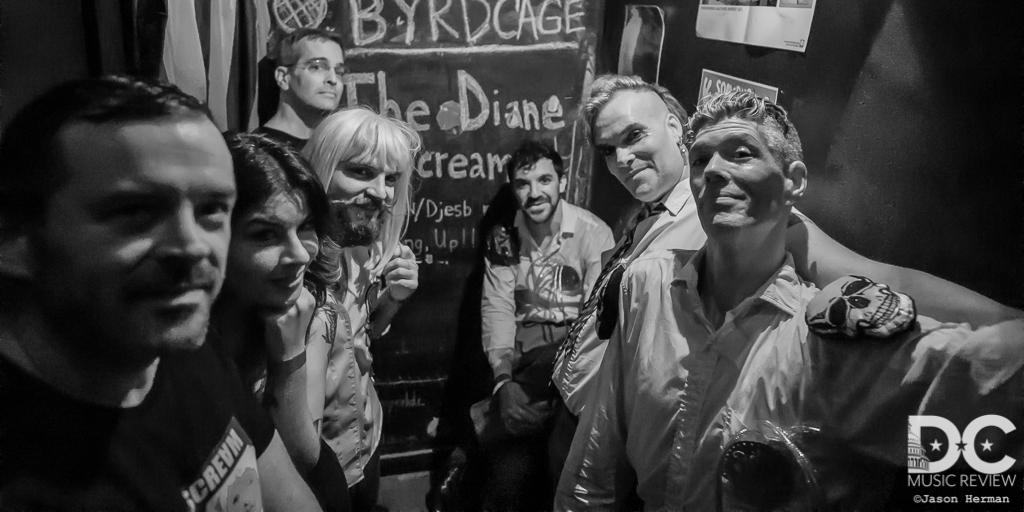 Here at DC Music Review, we love to report on what's happening in the community and what makes the DC music scene so special. Last Monday at the comfortably packed Songbyrd Music House & Record Cafe, we fell into a rare treat of seeing two bands, one old, one new, both quintessentially DC. The headliner was The Diane Scream Show, a new seven-piece that is "the DMV's premiere Diane Rehm-themed Talking Heads tribute band."

They lived up to that description, and then some.

The show went back and forth between an NPR "call-in" bit and Talking Heads covers. In the role of "Diane" was the can-not-miss, vivacious and witty band lead who goes by Aaron Spaace, who did a phenomenal job of drawing the audience in with a mix of improv and on-point schtick.

When the band got to playing some well-adored Talking Heads songs (set list below), they made it their own with their interesting instrumentation while at the same time staying true to what makes each song great, paying attention to the little idiosyncrasies that make the Talking Heads so deliciously signature.

The show was also advertised as a fundraiser for the non-profit, For The Love of Children (FLoC), serving local at-risk youth. The band  raised nearly $500 for the organization.

Overall, the set was a glorious mix of personality, theatrics, choreography, instrument swaps, glitter, glam, skits, kitsch, and a Halloween costume contest won by "Cool Disco Diane Rehm." (You know your show has achieved "Peak DC" when its a fundraiser that gives a nod to Cool Disco Dan and a WAMU/NPR icon, all at the same time.) But more than anything, this set was a great homage to a great band and a beloved radio host and DC-native, all for a good cause. ​​Opening for The Diane Scream Show was Djesben, a jazz trio of multi-instrumentalists who offer a fresh take on jazz standards, bebop and bossa nova, as well as original tunes influenced by music from around the globe.

The instruments of Djesben are not those of the typical jazz trio. The group is made up of Christian Crowley (dulcimer, slide, bow, vocals), Jerry Tolk (handsonic), and Topher Dunne (Chapman stick, vocals), and the band has been gracing the DMV with their music for since 1999. Their set on this Monday night was energizing, quite groovy, and a perfect opener to get the crowd warmed up for what was coming next.

And in case you missed this set, Djesben will be playing the Djesben's 20th Anniversary Show with founding member, hand-drummer, and percussionist Katy Gaughan on Sunday, 11/10 at the New Deal in Greenbelt.

All in all, the night was a perfect start to a DC-filled week with the Nationals winning the World Series, crisp autumn weather, and a spooky windy Halloween. This show was exactly the kind of thing we love to experience: playful, smart originals and mindful covers and gab that give a nod to what makes our city so very special. 1. A Study in Suspense 1. Thank You For Sending Me An Angel
2. Found A Job
3a. Halloween Theme Song(John Carpenter's "Halloween")
3b. Life During Wartime
4. This Must Be The Place
5. Once In A Lifetime
6. Slippery People
7. Heaven
8. Dream Operator
9. Wild Wild Life
10. I Zimbra
11. Burning Down The House

All Songs are Talking Heads covers unless otherwise noted.

For more information about Djesben or Diane Scream please see the following resources:

For Love Of Children

More Made In The DMV