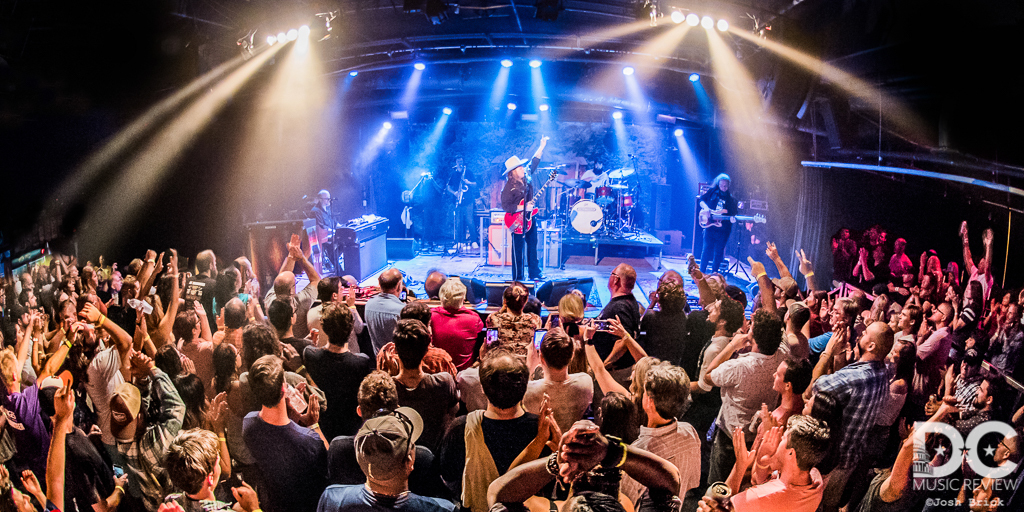 The Marcus King Band (MKB) is (so) hot right now. The rock and soul sextet headlined Baltimore Soundstage on Wednesday, July 10 and worked a capacity crowd into a frenzy with an inspired performance. Greenville, SC native Marcus King led his band with gritty and soulful vocals, mind-bending guitar work and a pair of new songs to boot. King's maturity and charisma are a sight to behold and makes it easy for us to forget he is merely 23 years old. His songwriting is as impressive as his guitar chops; add that to his raspy voice and an incredible band and he seems to be holding a full house. MKB recently embarked on their jam-packed summer tour in support of the 2018 release, Carolina Confessions, and again proved they play every show with a burning passion that's always on display. The band started strong with a trio of originals – a rocking "What's Right," followed by the heartfelt "Where I'm Headed" and the bluesy "Ain't Nothin' Wrong That," hitting the groove early. The band slowed things down for "Opie," the only tune played from the band's debut album, Soul Insight.

Up next was a pair of choice covers that kicked the show into another gear. First was the rocking protest anthem, "Ohio" (Neil Young), followed by the always-welcomed, funky Little Feat number, "Spanish Moon." Talent is palpable in MKB and the tune featured a gifted horn section – The Royal Horns – comprised of Justin Johnson (trumpet, trombone, vocals) and Dean Mitchell (saxophone, pedal steel guitar, vocals).

The show rolled on and included numerous highlights including a raucous "Radio Soldier" followed by a powerful "Side Door" that once again put King's heart and soul on full display. We were treated to a new song – "One Day She's Here" –  an R&B number with a solid groove  combined with some gritty guitar work on King's Telecaster. King had the crowd signing along during "Homesick" before the band closed the set with rollicking " Plant Your Corn Early > Papa Was a Rolling Stone > Plant Your Corn Early" that let Jack Ryan (drums) showcase his combination of power and precision behind the kit. The rowdy Baltimore faithful wanted more and MKB obliged with a two-song encore featuring another beautiful new tune, "Save Me," that was dripping with soul. King saved arguably his best song for last, "Goodbye Carolina," a poignant ode to a fallen friend from home. The song embodies everything the Marcus King Band represents and is one that cuts deep into the soul.

The gift Marcus King shares with his audiences each night are a reminder that the future is bright for authentic, soul-driven rock and roll music.

Click here to see the setlist for The Marcus King Band's  performance at Baltimore Soundstage on July 10, 2019

1. Save Me
2. Goodbye Carolina