The Revivalists Leap Into The Stars At The Anthem

What better way to spend the years ‘bonus day’ than seeing astoundingly talented The Revivalists perform at The Anthem. Just the second-stop of their Into The Stars tour, the band showed why they are selling out stops across the country, including the DC stop on this tour. Tank and the Bangas

Another New Orleans band, Tank and the Bangas opened the night’s leaping festivities with an explosive funk and soulful energy. The band is fronted by Tarriona "Tank" Ball and wowed the crowd, performing for nearly an hour as they won over the attendees with their fantastic music and incredible stage presence. Some band members took to the extended stage configuration to further connect with and impress the audience – a precursor to what lay ahead for the crowd. The band may not be as widely known as The Revivalists outside of their native New Orleans, but with performances like this, there is little doubt that this is a band you will continue to hear from for many years to come.

Tank and the Bangas 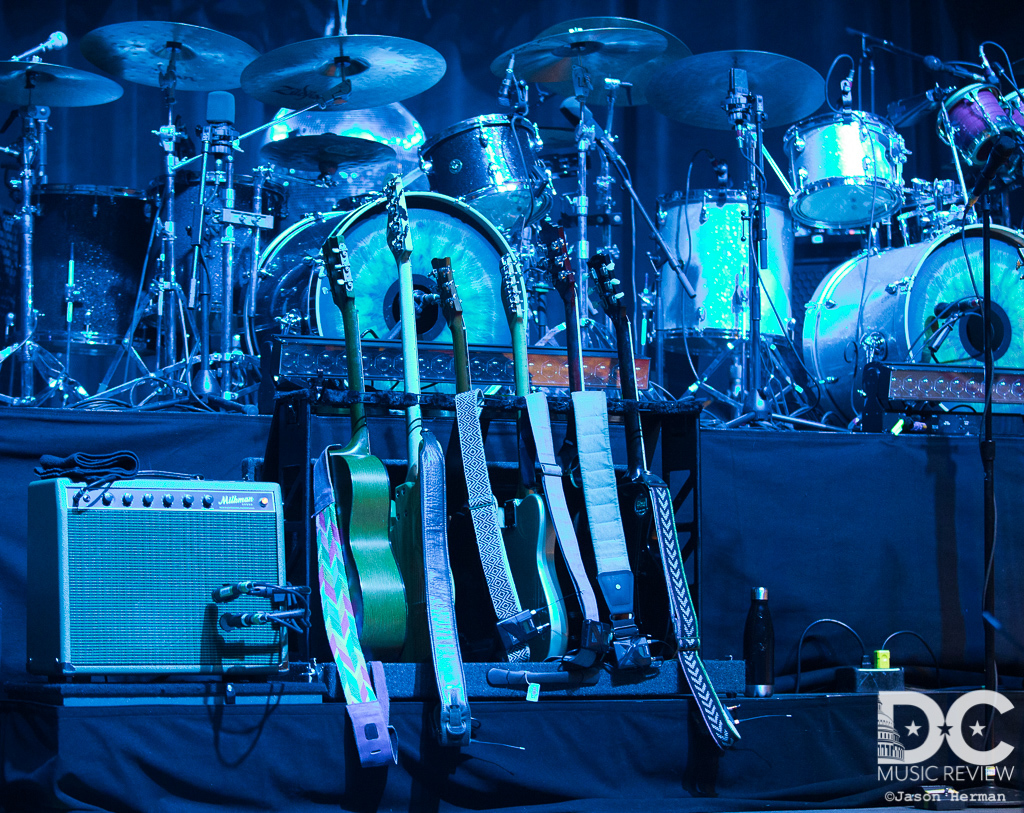 Before The Revivalists took the stage, it was easy to note the ample supply of guitars lined up on stage. With many other bands, this guitar rack would be set aside in the shadows with an occasional guitar change. The Revivalists, however, had guitars placed for all to see and would be frequently and delightfully rotated to match the style of their sweeping and diverse breadth of songs.

The excitement was palpable as the venue dimmed their lights. Slowly the backdrop ignited with a giant glowing heart as a slow heartbeat echoed through the space. Slowly and steadily, the pulse grew faster and with more intensity. Just when the heartbeat reached a crescendo, the band finally appeared on stage, greeted by a giant roar. David Shaw, the band’s charismatic frontman, was eager to celebrate a night of festivities with 6,500 adoring fans. Not since the heydays of Mick Jagger have we seen a musician run with the intensity and energy that Shaw exhibited on the stage. Some in the audience joked with one another that there might be a human-sized hamster wheel that Shaw could use to power a small village with his energy.

From the start of the evening, The Revivalists showed us the raw energy and charisma of the band that captivated the audience from beginning to end. Spending the better part of the evening running the length of the stage singing, reaching out to the audience, extending his mic to the audience and letting them sing with him, Shaw built a connection with attendees that they will not soon forget.

At times during the performance, Shaw would sit down at the edge of the stage, dangling his legs off the stage and gently kicking them back and forth - it was easy to see that he was in his element. Shaw had captured our collective musical souls and that we were all willing captors. Although Shaw came out on stage in a leather jacket, he set it aside as he settled into his calisthenics routine for the evening and revealed his muscular physique.

The stage that night had an extension for the band to connect better with the audience. The "runway," as it were, was a true catwalk of talent as Shaw, guitarist Zack Feinberg, and saxophonist Rob Ingraham who all took turns walking out on the extended stage and connecting with the audience.

During this performance, the audience would hear songs from the full breadth of The Revivalists catalog, including their newly released Made In Muscle Shoals. The latest album fits perfectly into the musical character of the band, helping to embrace further their Motown and Muscle Shoals influenced sounds.

Ingraham hypnotized the audience during the band’s performance of "Celebration" with a triumphant solo, where he was eventually joined by Shaw on the edge of the stage as the band closed the main performance to thunderous applause. When the band returned to the stage for the encore, ticket holders were greeted to an intimate performance that featured Feinberg and Shaw delicately bathed in a spotlight as they performed a delicate and heartfelt "Shoot You Down" together. The rest of the band rejoined the stage as Shaw kept his beautiful acoustic guitar strapped on his body. The encore was filled with a blissful mood as waves of bliss washed over the crowd. The vast cavern sang along to songs as piercing vocals and the pedal steel guitar of Ed Williams resonated in our hearts. Instinctively people swayed in unison to the soothing songs of the encore. Many in the crowd wondered if and when they would hear "Soulfight" to bookend "Shoot You Down."

The Revivalists continued to showcase the depth of their talent as they shifted from delicate resonating songs to "Gold To Glass." As the band, and the audience, led by Michael Girardot's piercing trumpet solo followed by Ingraham's saxophone, the band's sound was solidified into a cohesive and singular voice. With the encore ending like that, it undoubtedly helped the people wanting "Soulfight" not being played.

The band had other plans as they would re-appear for yet another encore. With shouts requesting "I Wish I Knew You", the band had other intentions. It was then that "Soulfight" would join with "Shoot You Down" to complete this heavenly bookend. Audience members looked at one another, realizing that they were attending a spectacular performance. As "Soulfight" drew to an end, a singular and large mirror ball above the crowd that had been dormant the entire evening began to turn slowly. When the audience noticed the slumbering giant overhead, especially when spotlights illuminated it, the venue erupted into thunderous applause. The evening would end with the crowd bathed in the delight of the mirror ball as the band would perform an extended version of their mega-hit "Wish I Knew You"

The Revivalists ended their performance as they asked the audience to pose for a photograph with the band. Apparently, the band loves performing at The Anthem almost as much as we enjoy seeing them here. DC Music Review is already excited and looking forward to the next time they play at The Anthem next year (we hope). Postscript:  Shortly before we were going to press, The Revivalists announced a performance on July 17, 2020 at the MECU Pavilion in Baltimore. We are gleefully happy that they wish to steal the hearts of the region once again this tour. Tickets go on sale to the public on March 5, 2020 at 10AM.

See details at bottom of the article.

Click here to see the setlist for The Revivalists' performance at The Anthem on February 29, 2020

1. Shoot You Down
2. Catching Fireflies
3. Gold to Glass

Tank and The Bangas

That first night of tour feeling. See you tonight DC!

Guitar brothers in arms. There’s nothing better than playing music with the people you love. Thank you DC for an amazing show. -Ed •

Thank you to everyone who will be spending their extra 24 hours with us this leap year. Our show at @theanthemdc ‪this Saturday is now sold out! We're so excited to get back on the road and see all of you on the Into The Stars Tour.

BAM! BOOM!!CRASH! WAPP!! CRUSH! SLAP!! WOO!! That’s about all I got for these first two shows.

Want to learn more about Made In Muscle Shoals? Watch the documentary here.

The following video is provides courtesy of The Revivalists' YouTube Channel.

The Revivalists Rock the Anthem