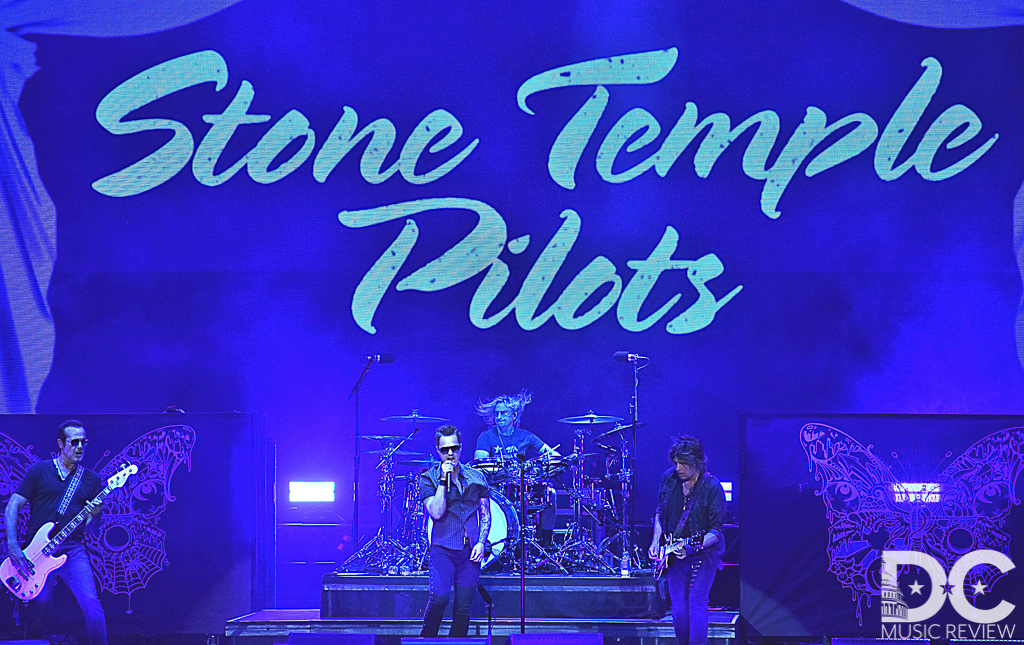 Sharon Reed is a writer and photographer based in Virginia. Sharon has written articles for: The Loudoun Tribune, Examiner/AXS, US News & World Report, Northern Virginia magazine, Loudoun Magazine, Loudoun Times-Mirror, Washington Post Express, and many more. We are very happy to have Sharon contribute to DC Music Review. ​ With a triple lineup of three outstanding alternative rock bands — The Cult, Stone Temple Pilots and Bush—plus opening band The Dirty Hooks—the audience rocked out at Jiffy Lube Live on Sunday, August 5. More than 40,000 people came out to watch the bands perform on the 11th stop of their 20 city Revolution 3 (Rev3) Tour.

As tri-headliners the bands rotated their performance order during each show on the tour. At the Jiffy Lube Live show, The Cult hit the stage first, followed up Stone Temple Pilots and then Bush. Each of the bands played a full set of music.

Opening for the tri-headliners was LasVegas-based  The Dirty Hooks​, which joined the Rev3 tour in August and are set to play through the end of the tour on September 2nd​.

Commenting on the show at Jiffy Lube Live, the band’s co-lead vocalist and bassist Bobby McCall said: “It’s been the best response yet as far as the crowd goes. The fans were amazing & some of the best people we’ve had the pleasure of talking to so far on the Rev3 tour.”

Dirty Hooks performed 5 songs at the show, starting off with "Cicada Tree" and finishing with "Midnight Runway."

Two of The Cult’s members have been with band since its founding: lead vocalist/guitarist/ percussionist Ian Astbury and lead guitarist Bill Duffy. Drummer John Tempesta joined the band in 2006. Keyboardist/vocalist Damon Fox and bassist/vocalist Grant Fitzpatrick joined The Cult in 2015.

With a background of dazzling videos, the Cult played 11 songs, including the U.S. chart topping songs "Rise" and "Firewoman." Segueing back and forth between performing songs from the 80’s and 90’s, plus "Rise" (2001) and "Elemental Light" (2012), the audience was treated to an outstanding show. With a new frontman, Stone Temple Pilots ​(STP) started off their show by performing "Wicked Garden," one of the band’s biggest hits. The song's lyrics were written by Scott Weiland, STP’s former long-time frontman. Many of the concertgoers were likely seeing Jeff Gutt, the new lead singer, perform for the first time live and the buzz among the crowd about Gutt’s performance—and the entire band—was extremely positive.

Formed in 1989 in San Diego, STP’s original lineup remained unchanged with the exception of the lead singer Weiland, who left the band in 2013. Chester Bennington, of Linkin Park, replaced Weiland in May 2013 until Nov. 2015. Tragically, Weiland died of an overdose in Dec. 2015 and Bennington by suicide in July 2107. STP’s three other current members have been with the band since its inception: bassist/backing vocalist Robert DeLeo and guitarist Dean DeLeo, who are brothers, and drummer Eric Kretz. Marking the new era with Gutt as frontman, STP performed two songs from the band’s 2018 second self-titled 7th studio album: "Meadow" and "Roll Me Under."

Clearly wowed by the outstanding performance, the audience clapped and cheered with great enthusiasm when the four band members took a bow at the end of the show.

DC Music Review caught up with a few D.C. area musicians who were in attendance at the show to find out their take on new frontman and the STP show: “I was one of the many that questioned Jeff’s ability to deliver Scott’s parts as we all remember them,” said John V. Hardwick, drummer with Uncle Jesse and Make More Animals. “That said, any true fan of the STP music got exactly what they needed last Sunday. The band was tighter than ever and it was great to see them so connected with the crowd.”

“I thought Jeff Gutt was exceptional as the new frontman,” agreed Michael Hynes, guitarist/backing vocalist in Vintage Kitty. “He really played the part. He sounded and looked like Scott Weiland. Gutt tried to duplicate Weiland’s original sound and vibe--and he nailed it… STP is as strong as ever.”

“I thought STP sounded stellar,” added Carter Pennell, guitarist in Kleptoradio. “Despite the casual fan’s parochial focus on Weiland, I’ve long considered the DeLeo brothers to be the real driving talent of the band. I’ve always been impressed by Dean DeLeo as probably the most talented and innovative guitarist of that style/era. He and Rob were able to very successfully weave jazz elements into radio hits creating complexities that are typically missing in pop music; STP songs are just outright recognizable and enjoyable songs to listen to even without the vocals. And it’s not just that STP has good music - it’s that they still play it so well.” “Breathe in, Breath out...” Bush frontman Gavin Rossdale sang while stepping up the stage at Jiffy Lube Live. Starting off the show with a bang, the band performed the mega hit song "Machinehead" to an extremely enthusiastic crowd.

From start to finish the audience sang and shouted along to the lyrics of eight chart-topping songs from the 90’s that Bush performed at the show.

Bush also performed "This is War," a single from their 2017 album Black and White Rainbows. Reaching back in time, the band also covered "Come Together" by The Beatles, a fan favorite rendition that Bush has performed many times at past concerts.

Highlights of the show included Rossdale’s performance of "Glycerine," during which thousands audience members waved their illuminated cell phones in the air while singing along.

During the performance of "Little Things" Rossdale jumped down from the stage and sang while running throughout the crowd. People scrambled to get close to the singer who sang enthusiastically with an entourage of admiring fans following along while attempting to take photos. When Rossdale returned to the stage to conclude the song the audience clapped and cheered with tremendous appreciation.

Topping off the show, Bush performed "Comedown," which seemed to perfectly evoke the mood of the audience. While performing in front of the stunning video backdrop, the audience sang along to the verse: On “Cloud Nine,” the audience clearly didn’t want the show to end.