Turkuaz Headlines a Colorful Night at 9:30 Club with Support from Aqueous 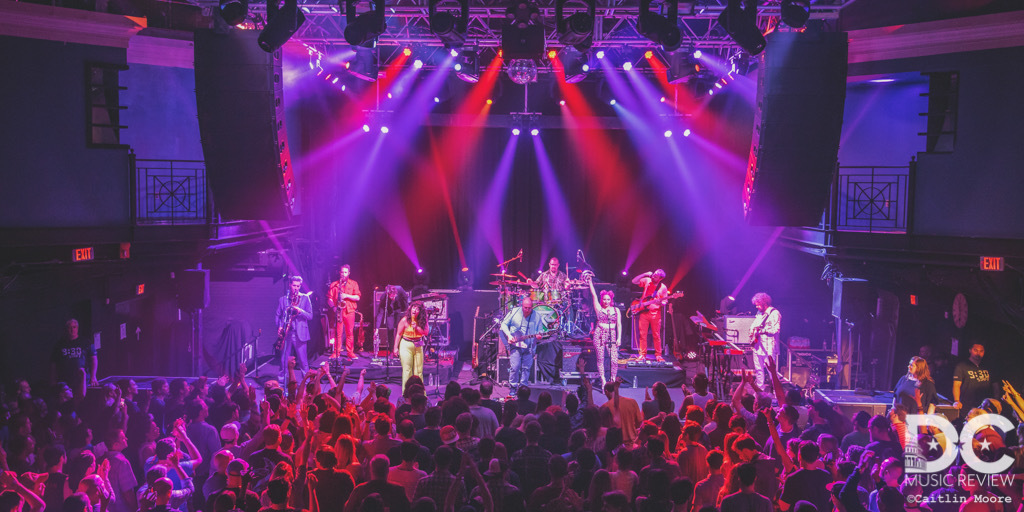 Turkuaz made their return to DC last weekend, bringing their powerhouse show to 9:30 Club for a headlining gig with the Buffalo-based jam band Aqueous supporting in the opening slot. The two bands combined for a high-energy, Saturday night rager that provided a wild party for concert-goers. Turkuaz's live performances are beautifully produced, with an outstanding light show to complement the band's colorful outfits and music. Headlining 9:30 Club for the first time since December 2016, Turkuaz played a set that was up-beat from the first note and offered highlights throughout the night. Opening the show with their self-described style of "groove rock," Aqueous played an hour-long set filled with exciting jams. Aqueous is known for extensive improvisation on stage, playing a full-set of completely improvised music just last month, and while they didn't have as much time to stretch their legs on the jams, each one packed a punch as the quartet  performed a set of mostly original songs, each of which gave the band an opportunity to explore spontaneous musical themes. Mike Gantzer (guitar/lead vocals) and David Loss (guitar/keyboards) led the band with soaring guitar peaks and harmonies while the rhythm section of Evan McPhaden (bass) and Rob Houk (drums) maintained a funky pocket for each of the tunes.

About halfway through Aqueous's set, the floor at 9:30 Club filled up to near capacity and Aqueous capitalized on the crowd size by bringing their set to a climax with their punk infused prog rock exploration, "Kitty Chaser (Explosions)," which segued seamlessly into a cover of Weezer's "Sweater Song." The light-hearted 90's cover got the crowd singing along before Aqueous returned to "Kitty Chasers" and left the stage with the crowd warmed up for Turkuaz.

As soon as Turkuaz steps on stage, there's a tonal shift in the room. With the band always dressed in their monochromatic outfits that come together to make a rainbow aesthetic, seeing this band perform is a unique experience. The nine-piece funk band in many ways has a retro vibe, but also feels contemporary, bringing a Brooklyn-hipster sensibility to their 70's house band stylings. Opening up with "If I Ever Fall Asleep" off their 2018 album, Life in the City, the horn section of Chris Brouwers (trumpet), Greg Sanderson (tenor sax), and Josh Schwartz (baritone sax) immediately kicked the show into high gear. The vocal section of Sammi Garett and Shira Elias began to showcase their choreographed dance moves before the front-man in blue, Dave Brandwein (guitar, vocals), dove into the  lead vocal role for the tune that exemplifies why Turkuaz refers to itself as a "neo-funk" band, bringing together spacey effects and a huge, electric sound, interspersed with sections that evoke the funk and disco big-bands of the 70's. Given their throwback sound, the band naturally scattered some classic covers throughout their set, including "Babies Makin' Babies" by Sly and the Family Stone and a set-closing "Get Back" by the Beatles. Turkuaz also brought Mike Gantzer back to the stage to play with the band and throw in shredding guitar solos for a few tunes.

Turkuaz's fun and funky performances are always a treat, offering hours of dancing and a band whose charisma elevates its shows to create an experience that's wholly different from their already gripping studio outputs. Their unique production, combining color, dance, and showmanship, makes for an engaging concert. Each member of the band is placed in the spotlight at different moments, demonstrating that Turkuaz is something bigger than just the sum of its parts. It's an uplifting experience where each individual contributes to the party.