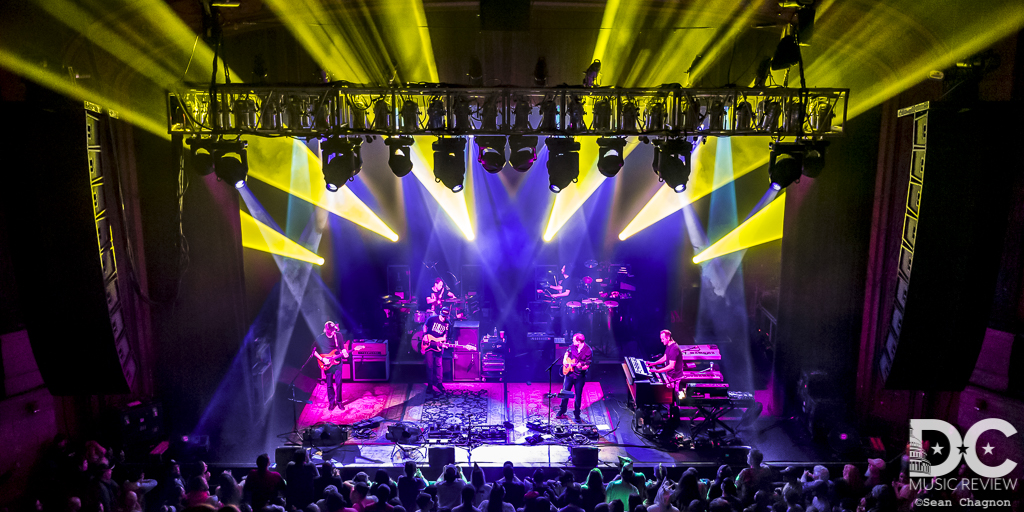 20 years is a long time in the scheme of things for humans. That’s about twenty five percent of an average human life. There are a lot of folks who spend that time doing the Monday through Friday daily grind making a living and not pushing their boundaries to see what they are really capable of accomplishing. How rewarding would it be to spend one’s life with close friends doing the thing that brought you together in the first place? Umphrey’s McGee walked that path: over two decades of musical fulfillment that has provided happiness to Umphreaks around the world. Their ability to meld multiple musical stylings from metal to jazz to reggae into highly technical, polyrhythmic songs while constantly experimenting through live improvisation keeps things fresh for both the band and fans show after show. Umphrey’s is keeping their stone moss free with their Wax On, Wax Off winter tour that started with a sold out two night stint at The National in Richmond, Virginia. The historic theater is a beautiful room with phenomenal sound that has a sloped floor and tiered balcony that affords a great seat to every person who attends an event there. Richmond’s own southern rockers, The Trongone Band, started off both nights with their upbeat, twangy rock’n’roll. Originally formed by brothers Andrew (guitar & vocals) and Johnny (drums), the band has been rounded out by the addition of Chip Hale (bass) and Ben “Wolfe” White (keys & vocals). The release of their first album “Keys to the House” has gained them some notoriety in the music scene and allowed them to open for many big name acts and grace the stages of large festivals such as Roosterwalk, Sweetwater 420, and Peach Fest. They warmed up the crowd on the cold January nights with the songs like the harmonic “Anne Marie” and gritty rocker “Straight to Hell” led by Andrew and the soulful “Love Away” led by Ben on his classic Wurlitzer boards. Night two brought a surprise addition of a three piece horn section for a few songs and Andy Farag of Umphrey’s for half of their set. The guys are currently working on a new album with the legendary low end of Widespread Panic, David Schools, so keep an eye out for new tracks from this up and coming band soon. Umphrey’s wasted no time jumping right into things on night one with a funky It Doesn’t Matter opener into a rocking Alex’s House and Similar Skin to the delight of many of the rail riders. As always, Jefferson Waful, the man behind UM’s lighting design, was hard at work from the get go providing a mesmerizing display to compliment the music. A southern fried Bad Poker was up next led by guitar virtuoso Jake Cinninger laying down insane licks. Jake is one of the most expressive guitarists out there today; between his lightning fast playing and a stank face to match, he is one captivating musician to watch on stage. Things started to get really heated when Der Bluten Kat was broken out with a cover of Led Zepplin’s Fool in the Rain sandwiched nicely in the middle. The set wrapped up with the prog rock Looks and anticipation was high for what was to come in set two. Umphrey’s dove deep into their prog rock pool for set 2. The intricate Mantis started the proceedings and led the set down the path of demonstrating the many sides of Umphrey’s; the heavy, mellow, melodic, and at times, just plain out there. The Mantis opener was followed by a very rare Believe the Lie and the new to the repertoire, Seasons. The Dump City>Walking on the Moon>Dump City>Mantis run to end the set was absolutely intense. Jefferson nailed the lighting during The Police’s Walking on the Moon. It mimicked a disco ball style reflection that truly gave the room a feel as if it had the stars shining down in it. The band left the stage briefly and came back out for a two song encore of Hangover and Glory. Hangover had the crowd chanting “all night long” throughout and it was an absolutely beautiful Glory to finish the night. Expectations for night two were high and the guys did not disappoint. With a long Miss Tinkles Overture opener, it was clear that Richmond was not going gently into that good night. And with it being keyboardist Joel Cummins and audio engineer Chris Mitchell’s birthdays, there was going to be some raging against the dying of the light! The band coordinated a collective happy birthday from the crowd and went right into an old favorite, 2nd Self. A Sociable Jimmy with a nice metal jam slid right into an instrumental I Heard it Through the Grapevine and just as smoothly was back to Sociable Jimmy. Another old and rare tune, Sweetness, followed which was jammed into a long Rocker 2. A seldom played Water and Breaker were also highlights of set 1. They came out swinging for set two opening with a very jammed out rendition of Band of Gypsys’ Power of Soul. After Spires, UM really opened up into a Hall of Fame ’19 worthy Ocean Billy with Jake Cinninger setting down his guitar to join Joel Cummins on keys. An extended Ringo was jammed into The Linear and The Bottom Half closer was jammed out and ramped up to bring the crowd to a frenzy to finish the set. An Umphrey’s relic, Kimble, was dusted off to start the encore and the night was wrapped up with the rocking opening track on it’s not us, The Silent Type. This two night run was one for the books and with the Doom Flamingo official after party in between these two shows, there wasn’t a soul who could’ve asked for a better weekend. They’ll be touring on their winter tour through the end of February and keep an eye out for the lineup to their phenomenal festival, Summer Camp!

Click here to see the setlist for Umphrey’s McGee's performance at The Anthem on January 11, 2019

Click here to see the setlist for Umphrey’s McGee's performance at The Anthem on January 12,  2019

1. Power of Soul (Band of Gypsys cover)
2.Spires
3.Ocean Billy
4.Ringo
5.The Linear
6.The Bottom Half

Today we have the pleasure of celebrating not one, but two #umphreys birthdays. Give it up for @goldlikejoel & @flyingeyepro! pic.twitter.com/7gAPUNw6Oe

Extra! Extra! Read all about it:

Friday's show is officially sold out! That's right, we're starting off the year with two SOLD OUT shows at @TheNationalRVA. #umphreys @phiercephotog1 pic.twitter.com/ayTwKGOPHq