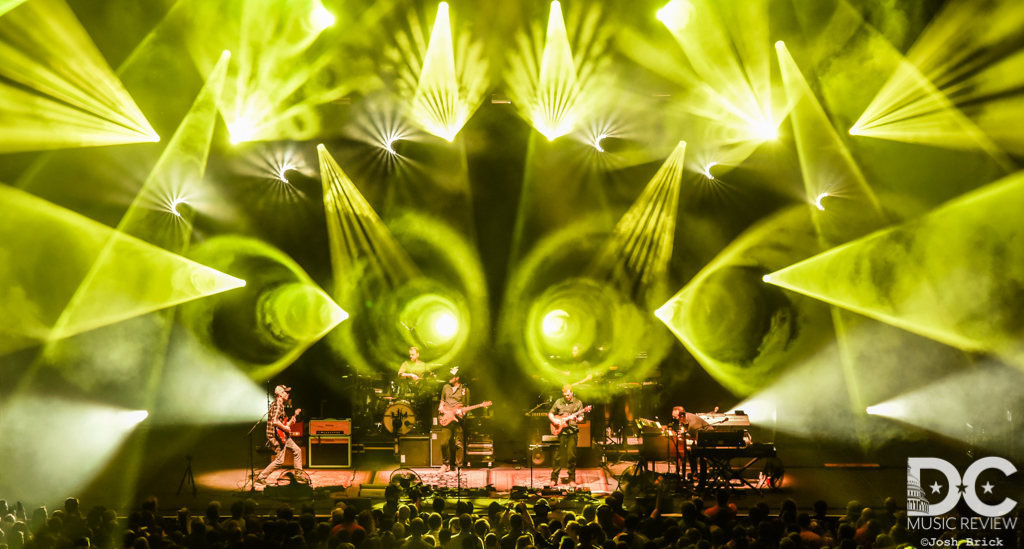 Umphrey’s McGee made their long-awaited return to the nation’s capital this week, making their debut at DC’s newest concert venue, The Anthem. With their last performance in the District taking place in 2016, and before that 2011, fans of their unique blend of prog-rock, funk, and metal were ready for a night filled with the face-melting shredding and full-band improvisation that define their shows. Having announced a free webcast and the possibility of special guests, the table was set for an absolute barn-burner, and the band delivered with a career-spanning set list and dazzling jams throughout the night.

Kicking off the show in earnest with the fan-favorite drinking anthem, '40’s Theme,' the band took their first song of the night for a spin, giving space for both guitarists, Brendan Bayliss and Jake Cinninger, to take extended solos before concluding the song with a roaring, energetic peak. Bayliss took a moment to acknowledge the band’s excitement to be playing the stunning new venue before diving into 'Puppet String.' When Umphrey’s McGee is at their best, they move as a collective unit through their jams, and that was true in this short but sweet – and unfinished – version, highlighted by the interplay between the two guitarists. Out of the jam, Bayliss, tapping out the notes on his fretboard, segues the band seamlessly into 'White Man’s Moccasins' from their 2002 album Local Band Does O.K. Then, giving the crowd a slight breather with the slow-funk of 'Example 1,' Ryan Stasik (bass) took the lead on what became the improvisational highlight of the first set. After 'Attachments,' Cinninger and Bayliss switched to acoustic guitars and brought out bluegrass guitarist Larry Keel to sit in on a performance of 'You and You Alone' off the band’s new album It’s Not Us. The set closed with Keel remaining out for an outstanding cover of the Beatles' classic, 'Dear Prudence.'

Umphrey’s opened the second set with the mesmerizing and contemplative 'Half Delayed,' another track from their excellent new album. Then began a thrilling run of songs that all featured lengthy and diverse jams. The mostly instrumental 'JaJunk' had the band moving in unison through a nearly 15-minute exploration, using their trademark hand signals to communicate as they went from one musical theme to the next before transitioning into 'Speak Up.' The percussion section of Kris Myers and Andy Farag showed up big on this version, which eventually concludes in a very dark section of metal. 'Booth Love' featured Jake Cinninger moving over to the keys with Joel Cummins for a jam that veers into calypso with the percussion. After 'Stinko’s Ascension,' Umphrey’s played 'Turn & Run' for the first time in nearly a year, closing a gap of 64 shows. The tune from their 2009 release Mantis was played only once in 2017, with the band seeming to prefer its reggae arrangement, 'Turn & Dub,' but it filled this slot perfectly. Then, Stasik’s infectious slap-and-pop hook in 'Puppet String' brought the band back to finish the song and bring the set to a close.

Umphrey’s returned to the stage for their encore with one loose end left to deal with. After playing one more track from It’s Not Us, 'Looks,' the band finished 'JaJunk' and sent fans out into the 60-degree February night, beginning what DC fans hope will be a long history at the Southwest Wharf’s new venue.

The Marcus King Band opened the evening with a blistering set that will be featured in an upcoming article on www.DCMusicReview.com.

Love Hope Strength Was At This Event