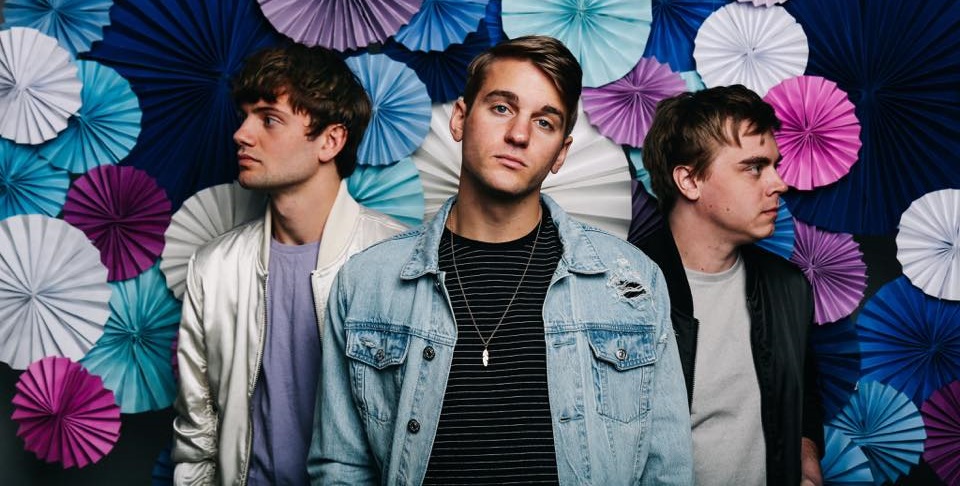 Friends, family, and fans filed into DC9 on Friday night to support at least one of the four fantastic bands to grace the stage. While the headlining act — Milwaukee’s Vinyl Theatre —didn’t go on until late in the night, bodies were already tightly packed into the intimate venue at least three hours beforehand. With a setlist that favored their latest album release — Starcruiser — Vinyl Theatre was eager to show off their updated sound and look. Dawning matching jumpsuits that fittingly had the look of spacesuits, the band — comprised of Keegan Calmes (guitar, vocals), Chris Senner (keys), and Nick Cesarz (drums) — kicked off the night with the catchy and modern “We Make The Music.” With heavy beats and and plenty of experimental synth mixes, Vinyl Theatre set the tone for the night with a burst of confidence and energy that continued throughout their set.

The setlist was fast paced and exciting, the musicians playing an even mix of upbeat hits that were made for dancing, as well as slower, more romantic songs that gave the audience a chance to breathe.

To add to the interstellar theme that was cleverly woven into the night, the band opted for a voiceover from philosopher Alan Watts, that sounded as though it were being transmitted over a loudspeaker on a ship. Vinyl Theatre set up for “Knock Knock” as a segment from the motivational speech “The Real You” played:

Bands like Alt-J and Stars have opted for similar effects that add a unique multi-dimensional layer to their music. Although this particular segment is not present on Starcruiser, it added an extra level to their show. Suddenly silent, with ears perked upward, the crowd listened closely, trying to make sense of what they were hearing. Vinyl Theatre didn’t let allow for prolonged rumination, quickly launching into “Knock Knock,” a powerful piece that the guitarist played so hard his strings snapped. For a band that’s only been around for five years, they play in such a way that evokes numerous references. The etherial and heavy synth of “Feel It All” was reminiscent of the brooding and magnificent scores of award-winning composer Johann Johansson, while at the same time channeling an early Mutemath vibe.

Vinyl Theatre was preceded by local band Sub-Radio, LA-based The Catching, and the dream-pop group Royal Teeth. Although each band had their own very distinct sound, they built upon one another.

Sub-Radio did a spectacular job bringing the energy during their too-short set. With quick and funky instrumentals that showcased the impressive range of the lead vocals, Sub-Radio are a local band to keep an eye on, especially for fans of St Lucia and Two Door Cinema Club.

The Catching, the grungy LA-based boy-band with a name alluding to one of JD Salinger’s greatest works, brought a psychedelic electric feel to the stage with their edgy and impressive instrumental-heavy set. Their setlist featured one of the strongest covers of the night, The Beatles “Come Together,” that felt straight out of Across The Universe.

Female-fronted Royal Teeth was a breath of fresh air, the dream-pop sounds a blend of CHVRCHES meets Sylvan Esso meets an upbeat Beach House. The group brought a new level of energy to the stage, at one point leaping into the audience and dancing, all the while pounding on the drums.

By the time the headliners hit the stage, it was clear that each opener was carefully selected to precede Vinyl Theatre, as they somehow contained the best bits of each of the openers: the impressive long notes of Sub Radio, the grunge and edginess of The Catching, and the synth of Royal Teeth. The show ended with a sense of cohesiveness, wherein every choice felt intentional and meaningful.

At least two of the bands who performed that evening mentioned that Friday night’s show was one of the best of the tour, with Vinyl Theatre going as far to say that it was “the best DC crowd we’ve ever had!”

Fans lingered long after the music ended to chat with the artists from each of the bands, who were all eager to chat and pose for photos.

Unfortunately for the DMV, their Richmond show the following night was cancelled due to potential inclement weather. And, although we fully intended to photograph, our Richmond-based photographer was also rained out.

While it was a bummer for the DMV, the bands definitely earned that well deserved day off.

Click here to see the setlist for Vinyl Theatre's performance at DC9  on Friday, September 14, 2018.

1. We Make the Music

14. Never Thought This Would Happen