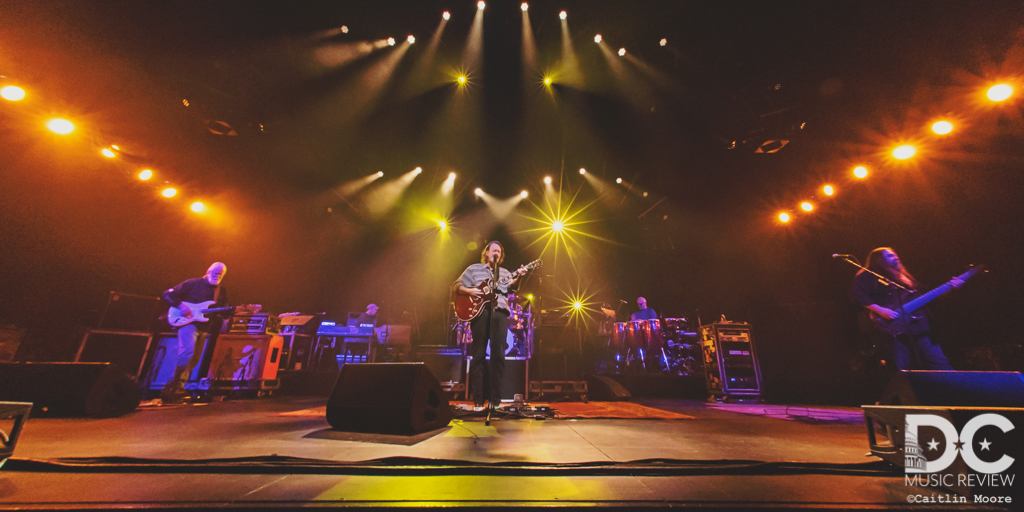 American rock royalty Widespread Panic (WSP) returned to the Theatre at MGM National Harbor for a trio of shows over St. Patrick's Day weekend 2019. We were lucky  to catch the final two shows on Saturday, March 16 and the run-closing Sunday show on the Irish holiday. The band was in fine form and delighted the joyous fans  in the 3,000 capacity music room at the still-new casino at National Harbor in Oxon Hill, MD.

For the second year running, Panic fans infiltrated the casino early – many hoping to secure the highly coveted Chuck Sperry print. Others reveled outside the Lobby Bar to the sounds of Sol Roots and the taste of potent craft beers. It all led up to the middle night of Panic's initial shows of their spring run. The first set featured several old-school WSP tunes from the band's earliest albums, including the "The Take Out," "Porch Song," and Bloodkin's "Can't Get High." The band honored founding member and original guitarist Mikey Houser throughout the run and Saturday's setlist especially delighted the older heads in attendance. The set's extended jam came during "Airplane" and the band was settling in nicely. Dave Schools (bass) bounced around as JoJo Herman (keys) laid down a funky riff while Jimmy Herring (guitar) provided some haunting licks before tearing into a fierce solo that included some incredible bends paired with his immaculate tone.

The first set finished with a flurry that included "Rebirtha," and a rocking "Sleeping Man," with John Bell (vocals, guitar) on slide and JoJo providing the funk on the clavinet. Crowd favorite "Ain't Life Grand" brought the set to a close and fans exited the theatre to fill their cup or get a smoke. The band returned and opened the second set with the swampy rocker "Proving Ground," and we knew the boys meant business. They segued into another heavy hitter, "Impossible," before closing the sandwich with a "Proving Ground" reprise. The rhythm section hit the groove on "Pickin' Up the Pieces" as Duane Trucks (drums) and Sunny Ortiz (percussion) were in lockstep with Schools as JoJo tickled the ivories for a tasteful solo. Paul Hoffman (lighting director) worked his magic with a gorgeous backlit stage display that danced with the groove. Fans noticed the new light rig for this tour that was without the signature screens we became used to. The rig was more than substantial and Hoffman utilized it to perfection during the run.

"Diner" came next and we all took a ride on the Duane Train as Trucks displayed his combination of power and precision behind the kit. The band went next level as Herring raged on with some mind bending guitar work and the band was in full throttle. JoJo's piano mastery was on display and JB unleashed some powerful vocals that cut to the core. The band morphed into a powerful "Junior" and the band had the rowdy fans in the palms of their hand. The hits kept on coming with "Surprise Valley" as School's thumped along while Herring played with his signature PRS axe with authority. Trucks and Ortiz put on an absolute clinic during an extended "Drums" before the band returned for a beautiful "Cease Fire" off the 2015 album, Street Dogs. After a rocking first half, the song's outro featured a beautiful interplay between Herring and Herman. The pair's musical connection was on full display as they traded off in a beautiful way – Herring with precise melodic bends and Herman with some classic piano playing.

The band kept it old school with "I'm Not Alone" before the funky, set-closing, "Love Tractor." After a brief encore break, Panic kept the energy high with "North" before closing the show with a take on the apropos "And It Stoned Me" by famed Irish legend, Van Morrison.

We certainly didn't miss the Sunday show and were rewarded with another fantastic Widespread Panic performance. Panic freaks were dressed in green and sparkles as the mood was festive for St. Patrick's Day 2019. The band played no games early and opened with a strong "Disco" that had everyone grooving. They were locked in and it showed. "Rock" followed to the beat of Trucks on the snare and JB leading with the dirty slide guitar. Things slowed down as the boys hit a nice reggae groove during "Sleepy Monkey." Herring provided a beautiful outro with smooth swells and dramatic bends. The familiar chords of "Space Wrangler" came next, off the band's 1988 debut album.

Schools took us for a walk during "Second Skin" as his bass was featured for a 17-minute excursion. JoJo danced on piano throughout and Herring provided his signature fiery playing with an extra dose of mean. The band went honky-tonk on "Help Me Somebody" as JoJo took lead on vocals. After a couple of slower tunes, WSP picked things back up with the rousing funk-rock sounds of "Pigeons" and everyone was getting down on the dance floor for the set closer.

After the band got a break and the crowd caught a buzz, we were set for the final set of the run. The band was in full throttle as they opened to the hard rocking sound of "Imitation Leather Shoes." After "Good People" came the Panic staple, "Bust It Big" and everything was gravy. JoJo gave us the funk on keys as JB continued to utilize his slide guitar with beautiful tone.  After the apt lyric "Beware of the man who builds monuments to himself," Schools added his own bit and yelled "Fake News!" Schools continued on vocals with the dark "Blight" before claiming "love always wins!" Herring added a fiery solo to the mix and was certainly hitting the note. The heaviness was on display before the band jumped into the upbeat "Tie Your Shoes" that featured more guitar wizardry from Herring. Hints of "Traffic" came through before the band dissolved into their own variation of "Space," reminiscent of The Grateful Dead. JB's vocals took center stage during "Jack" before the band delved into a take on Alan Price's "Sell, Sell." JoJo delighted on the organ before Herring went full machine gun on guitar. Panic closed the second set with David Bromberg's "Sharon" to the delight of the crowd.

JB thanked everybody for the good times over the weekend and proceeded with "May Your Glass Be Filled" to honor the Irish celebration. The band had one more rocker in them as they went into a thumping rendition of Tom Petty's "Honey Bee." Fans said their farewells as they poured out into the casino after another successful Widespread Panic run at the MGM National Harbor. If we're lucky, they will return and the same rowdy crowd will be back again. 1. May Your Glass Be Filled
2. Honey Bee (Tom Petty cover)