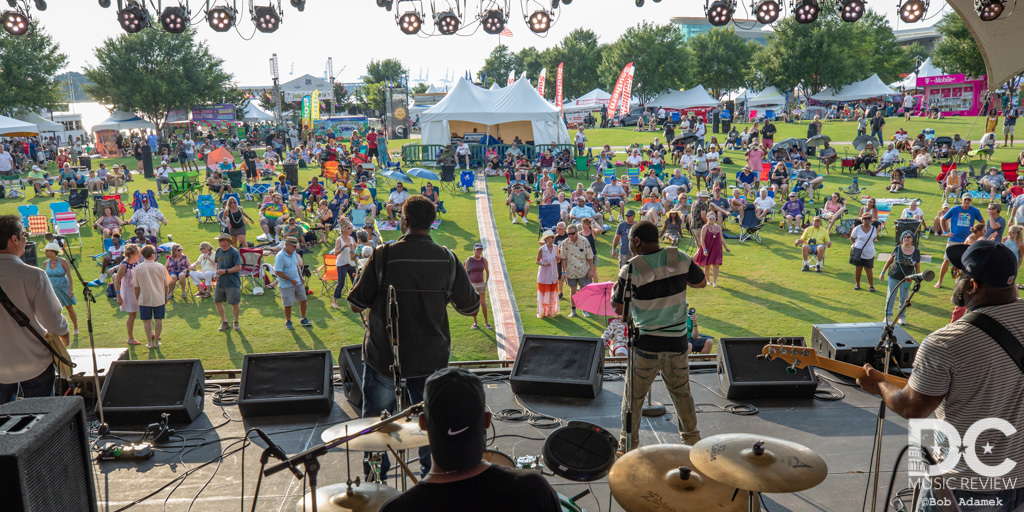 New Orleans music, food and culture are such marvelous exports. On June 28-30, this intricate and beautiful culture was once again in travel mode, on display for the 30th straight year at Norfolk Virginia's Bayou Boogaloo Music and Cajun Food Festival. The festival is held in Town Point Park right on the Elizabeth River, bringing to mind a familiar New Orleans landscape. Further cultivating the New Orleans atmosphere are the 20 New Orleans arts and crafts vendors and 15 food vendors providing boiled crawfish and plenty of other Cajun treats. The music was absolutely stunning. The Dirty Dozen Brass Band’s Friday night headliner set included highlights such as tuba player Kirk Joseph and baritone sax player Roger Lewis leading a little second line parade through the crowd, a three song sit in by the trumpet and trombone players from the Ashville NC band, The Empire Strikes Brass, and several fans being invited up on stage to dance. Sunday’s main stage lineup included three straight bands that played fully engaged, high-energy sets. First up was an old friend of the festival, the New Breed Brass Band. A very hot afternoon sun kept many in the crowd seeking refuge in the shade, but New Breed kept the hardier souls dancing and singing with plenty of call and response. Next up was a straight fire set from The New Orleans Suspects, out on the road with new drummer Eddie Christmas. Christmas  is a veteran NOLA drummer, well-versed in all the city’s funky styles, and proved a great fit for the top shelf R&B, funk and soul of the Suspects. The Suspects are now a well-established powerhouse. They wove danceable groove after danceable groove through their entire set, which like every other band at the festival paid tribute to Dr. John.

Dumpstaphunk closed the festival with the greasiest funk/two bass set, this side of New Orleans. Bassists Nick Daniels III and Tony Hall played the funkiest of solos during one the their signature songs, "Meanwhile", and highlighted the set with a crushing version of the Parliament Funkadelic classic, "Flashlight."

We must conclude by saying that Bayou Boogaloo is bankable fun year after year, congratulations on 30 years and see you next year!