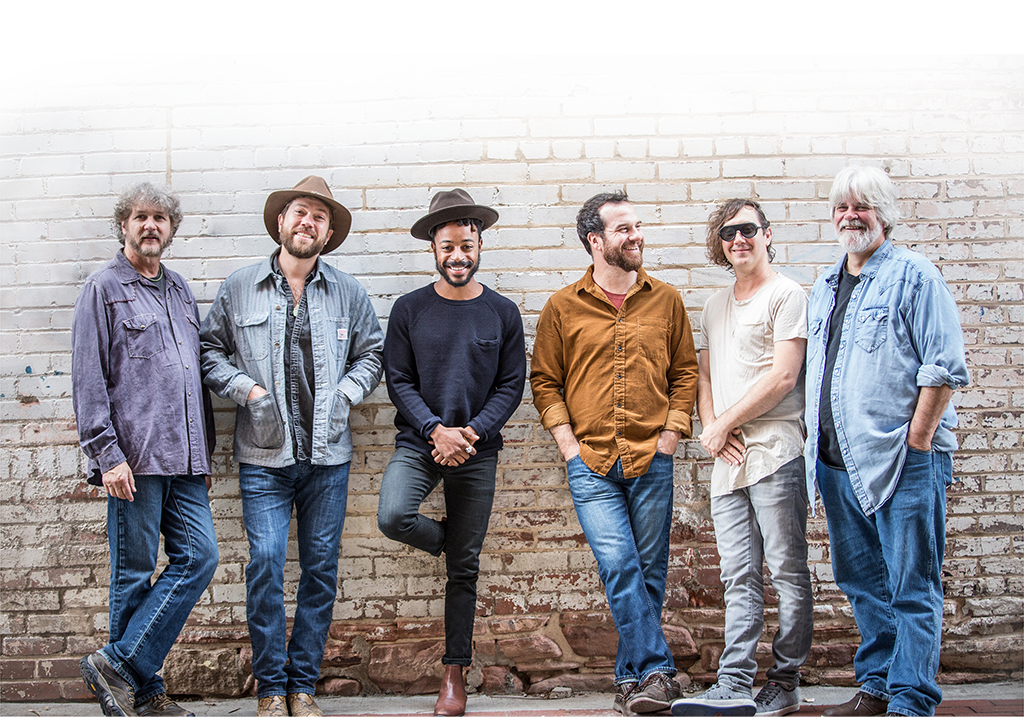 Leftover Salmon is scheduled to release their highly anticipated album Something Higher after nearly two years since their 2016 album, 25. Longtime fans of the band will not be disappointed by the new 12-track album, which boasts sounds and genres that have not been previously heard on past Leftover Salmon albums. Something Higher is due for release Friday, May 4. The Boulder-based band is currently comprised of Vince Herman (vocals, guitar, washboard), Drew Emmitt (vocals, mandolin, fiddle, electric guitar), Greg Garrison (bass, vocals), Andy Thorn (banjo electric banjo, vocals), Alwyn Robinson (drums, vocals), and Erik Deutsch (keyboard). Although Leftover Salmon are classically classified as a jam band favoring the bluegrass, Cajun, and swing genres (among others), Something Higher represents an evolution of their sound, with tracks that continue to feel fresh and modern. Elements of bluegrass, rock, R&B, and even electronic influences are married into one exciting masterpiece of an album, that feels different, yet still cohesive.

Pioneers in the jam band scene, Leftover Salmon play with an immense range of sound that is baffling for a five-piece band. While each recorded track is played with a skilled ferocity and passion, I’d imagine that witnessing a live performance would be an even more energizing treat, with fast-paced beats and intricate melodies commanding attention.

Particularly noteworthy songs include “Southern Belle” and “Evermore.” Two of my favorites on the album, both are full of longing and symphonies of expectedly contrasting instruments. The former adopts a soulful tone with folksy harmonies that highlight a comforting twang in Herman’s vocals, which pair perfectly with ribbons of keyboard that decorate the sweet lyrics.

“Evermore” is a song that is wistful and full of longing for adventure, while still acknowledging the one place they can actually call home. The contrast between the mid-paced drums and the fiddle set the tone for a rollercoaster of a song that transports you to a forest studded in the evergreen trees that the song title mildly alludes to. It is both urgent and calming, reinforcing the idea that this song and consequently album is a complicated mixture of sounds, emotions, and meanings. Over half the song is instrumental, with the instruments dancing around and with each other, twisting together to create a heartfelt and well-crafted mix of skilled precision. “Analog” and “House of Cards” are two tracks you wouldn’t typically expect to hear on the same album, with the former dripping with electronic sounds, and the latter employing almost Rastafarian elements that somehow echo The Eagle’s “Hotel California.” The political undertones and the somewhat foreboding beat add an extra layer of meaning to the track, as well as the album as a whole, reinforcing that this album is current and pressing.

While the first half of the album displays immense diversity and range, the second half plays like fan-favorite bluegrass. The incorporation of both experimental and classic sounds will leave fans and newcomers alike pleased and eager for more. The album goes through a whirlwind of emotions, beginning on an uplifting note with country sounding “Places,” and ending with the heavier and nostalgic “Burdened Heart.” The latter closes out the album with an intro that is reminiscent of both George Harrison’s “Rising Sun,” and the 2007 film Across the Universe’s take on The Beatles. It is the perfect close to a satisfying album.

Something Higher is both surprising and exciting, with each song bursting with creativity and originality. Leftover Salmon’s music is relatable and accessible for music lovers of all sorts, and becomes even more inviting and enjoyable over numerous listens. There’s something for everyone on this album, and despite some wild leaps, passionate fans will also be satisfied with this latest release. 2.  Show Me Something Higher