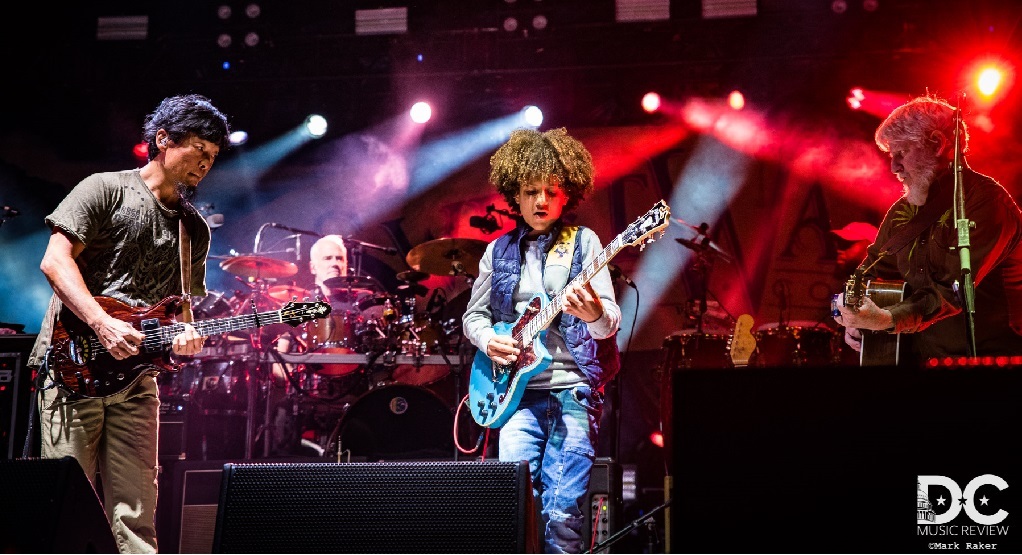 Author Preface:  Before I dive into this recap, I think it’s important to give a preface, or a disclaimer if you will. If you’re reading this, it’s likely you’ve been to a festival like Sweetwater 420 Fest before. There are three stages and lots of choices to make, like which bands to see or skip; when to go grab a drink or take some time to see the city you’re visiting; which song to skip for a trip to the port-a-potty bank; when to try and get some sleep so you can be ready to go for the next day of music. What you’re about to read is just one fan’s take on the moments that stuck out from a festival that had something unique to offer to each of the thousands of people that attended.

For those who may see this review and think TLDR (Too Long, Didn't Read) we can sum the Sweetwater 420 Fest this way:

​Sweetwater 420 Fest was excellent this year. The organizers put together a fantastic, diverse lineup that created some difficult choices and showcased some incredibly talented acts, both established and ascending. The setting in downtown Atlanta is a great setup for a festivalthis size, and the stages are very close to one another and easy to navigate. This has become a can’t-miss festival every year, and this year may have been the best yet because of the stellar collection of artists on the bill.

​Having said that, let’s get into it… Vulfpeck was clearly enjoying themselves at the festival.

Vulfpeck was clearly enjoying themselves at the festival.

Sweetwater Brewery’s annual music festival, Sweetwater 420 Fest brought an outstanding, stacked lineup to the Peach State for 4/20 weekend. The festival in downtown Atlanta’s Olympic Centennial Park, which boasts an attendance of 50,000 fans, has become known as one of the best jam band festivals year in and year out, and the 2018 iteration was no different, with a schedule that included established headliners and up and coming stars each of the three days. This year, Sweetwater 420 Fest also featured 14-year-old guitar prodigy Brandon “Taz” Niederauer as the festival’s “Artist at Large,” placing a huge spotlight on the weekend’s (literally) smallest artist.

Prior to the official first day of the festival, night one headliners the String Cheese Incident hosted an official pre-party, treating 1,000 lucky fans to an intimate performance at Variety Playhouse. Die-hard Cheese fans poured into the venue and the band kicked off the weekend with an outstanding, career-spanning show for their most devoted fans that made the trek from far and wide. Upon coming out for an encore of Talking Heads’ “This Must Be The Place (Naïve Melody),” this show set the tone for a weekend of positive vibes and fantastic music spanning a wide range of genres. Perfect weather and fans enjoyed every minute of it!

Perfect weather and fans enjoyed every minute of it!

The festival kicked off with perfect weather – clear skies and low 70s temperatures – with Denver funk masters, The Motet, providing the opening set on the main stage, offering an opportunity for the newly arrived fans to loosen up their hips and get limber for a long weekend of dancing in the sunshine.

As the Memphis soul band Southern Avenue wrapped up an inspired set on the side stage, and the Record Company’s blues-inspired power rock carried from the main stage, an enormous crowd gathered for a 4:30pm set by the up-and-coming jam band Spafford. Attracting easily the largest crowd at the side stage all weekend, Spafford delivered an outstanding set for devoted fans and newcomers alike. Following a 4:20 4/20 toast, Spafford kicked off a set of exploratory jams and high-energy psychedelic rock, highlighted by a 20+ minute improvisation out of “Minds Unchained.” Following a tremendous peak in this jam, the band closed their set with a cover of Tom Petty’s “You Don’t Know How it Feels” before saying goodbye to nearly the full festival crowd until their late night set at midnight. The 4/20 Festivities wrapped up on the main stage with an excellent set by country-rocker Sturgill Simpson that showcased his unique ability to incorporate modern country, blues, and rock and roll into a completely original sound and lively performance, followed by 2 sets of the String Cheese Incident. Cheese brought out Taz Niederauer for his first sit-in of the weekend on the second set opener “Close Your Eyes.” This was the first instance of many over the weekend where Taz was able to lend his considerable talents on the electric guitar to add another dimension to a band’s sound, adding fierce blues-rock to String Cheese Incident’s set before the band would go on to explore every facet of their style, including traditional bluegrass, electronica, and soul.

Spafford brought their late-night party to the same venue as the SCI pre-party, Variety Playhouse. After instantly selling out a smaller show at Terminal West, the band and festival moved to the considerably larger Playhouse, giving Spafford possibly their largest club/theater set in the band’s five-year history. This late night show was a rager, featuring incredible jams out of “Electric Taco Stand,” “Bee Jam,” and “All In.” The energy at this show was intense and relentless, blowing out the bassist Jordan Fairless’s amplifier halfway through the set and providing a great outlet for the crowd to keep dancing until 2am. Saturday brought clear skies again as a slow-moving crowd trickled into the park throughout the afternoon. Following sets by Anders Osborne and Marco Benevento, and as Arlington-based reggae band SOJA played the main stage, Artist at Large, Taz Niederauer played an hour and a half set that put his talent on the guitar, as a bandleader, and a singer on display. But the party kicked off in earnest at 5:15pm with a rare daytime slot for the adrenaline-fueled Grateful Dead tribute band Joe Russo’s Almost Dead. In the first of their two sets, JRAD showed off their psychedelic, acid-jazz chops with ambient explorations of “Feel Like a Stranger” and “The Wheel.”

With a festival lineup as stacked as this one was, the placement of JRAD in this late-afternoon slot created an unfortunate conflict, as many fans – myself included – had to make the choice of two sets of the best dance party in the jam scene, or a side-stage set by Grammy-award winning jam-grass outfit the Infamous Stringdusters. JRAD rewarded the loyalty of those who stayed for their second set though, opening their final frame with a rousing rendition of “Shakedown Street” with frequent callbacks to “Feel Like a Stranger” from guitarist Tom Hamilton. Closing out the night as headliners, the Tedeschi Trucks Band played a great set of soul and southern rock that was highlighted by a sit-in by Taz Niederauer on the Blind Willie McTell classic, popularized by the Allman Brothers Band, “Statesboro Blues.” As slide-master Derek Trucks, who began touring at age 13 himself, and Niederauer traded shredding guitar solos and Susan Tedeshi belted out the soulful vocals, one could feel a certain gravity in the festival-grounds. It’s moments like these that make people travel for live music; to see a torch being passed down from one generation to the next while honoring the inspiration from musicians long gone. In this sit-in perhaps more than any other, Taz truly held his own while playing next to, arguably, the greatest guitarist alive. On the final day of the festival, the perfect weather unfortunately ran out, and only a small, wet crowd remained for a great final slate of bands. Following Sister Sparrow & the Dirty Birds on the main stage, Greensky Bluegrass played an inspired set featuring another Taz sit-in on an Allman Brothers tune, “Midnight Rider.” Just a few minutes later on the side-stage, the instrumental rock quartet TAUK ignited their crowd’s energy with an intense and powerful cover of Rush’s “Tom Sawyer.” These two bands, Greensky and TAUK, while completely divergent musically, presented two similarly energetic and engaging sets to dance to as the rain continued, unrelenting.

Sunday’s undoubted highlight was the 5:00pm set by Vulfpeck, the Michigan-based funk outfit that has risen to fame in meteoric fashion. With a collection of guests, including guitarist Cory Wong and vocalist Joey Dosik, Vulfpeck put on what may have been the best performance of the weekend, never letting their foot off the gas and having an unbelievable amount of fun on stage, getting the crowd moving endlessly with their catchy hooks and up-tempo bass leads by Joe Dart.

Umphrey’s McGee was set to close out the festival with 2 sets, but due to a wind warning had to adjust so the festival could end early, meaning instead the band played one extra long set that reached nearly two and a half hours. Umphrey’s set featured tunes spanning their twenty year career, with old-favorite “Ringo” providing the last jam vehicle of the night and serving as the final climax of a set that featured 4 improvisations of 15+ minutes, following “Draconian,” “Mantis,” and “Remind Me.” Their set also included the final Taz Niederauer sit-in of the weekend before their encore choice poked fun at the thin crowd of fans that stuck around with Led Zeppelin’s “Fool in the Rain.” Despite the wet conditions fans continued to enjoy themselves

A day of rain couldn’t stop the fun of a truly special weekend of music in the Peach State. Sweetwater 420 Fest has become on of the best lineups year-in and year-out, and the festival delivered this year with perhaps their most stacked lineup yet. I’ll leave you with five important words to takeaway from my experience: don’t miss it next year!

Despite the wet conditions fans continued to enjoy themselves

Read Other Concert Reviews from Artists At Sweetwater 420 Fest