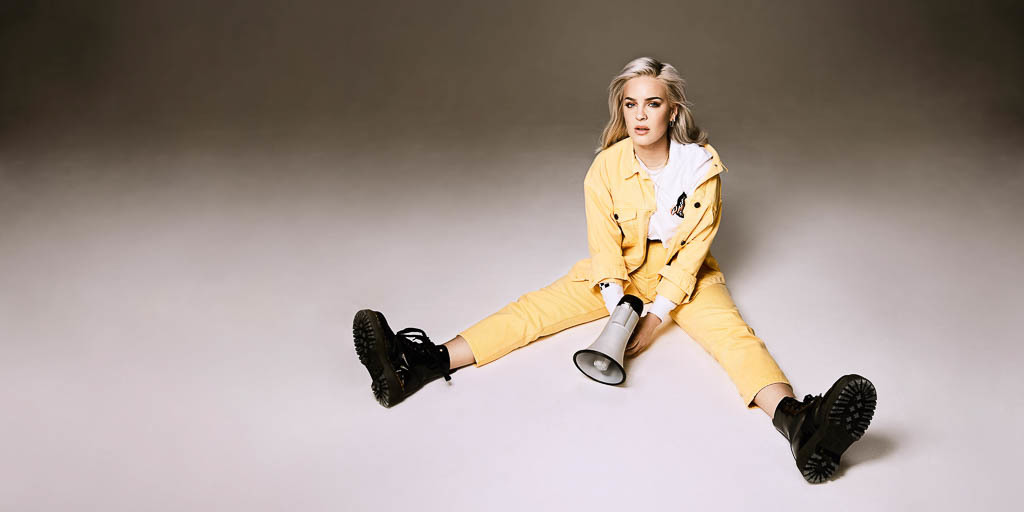 Anne-Marie has had quite the year, from releasing her debut album Speak Your Mind to her single "Friends" with Marshmello going platinum.

Do a quick Google search, and you'll hear her name mentioned alongside Ed Sheeran, Sean Paul, and Clean Bandit. But sit down for a chat with the 27 year old, and you'll forget that you're talking to the 25th Most Listened To Artist in the World on Spotify.

Greeting me with an enthusiastic hello, I immediately felt that the Brit was a close friend sitting down to hear the latest gossip. In reality, Anne-Marie is playing a sold out show at U Street Music Hall on September 26 and I'm here to tell you just why you'll have major FOMO if you don't find yourself a ticket.

Read our interview with the lovely Anne-Marie below.

AM (Ana Medvedeva): First off, I wanted to say thank you for taking the time to sit down with me, as I know you only have about few minutes in your hectic schedule. I wanted start off by congratulating you on getting your debut album certified gold by RIAA!

AM: I read that you’re also performing on Stephen Colbert in two days. What’s your headspace like right now?

Anne-Marie: I’m majorly excited, the last late late show I did was with friends, so this is really quite exciting.

AM: Have you picked out what songs you’ll play?

AM: Are you able to process all of this, while not sudden, quick success while it's happening?

Anne-Marie: I try to appreciate everything in the moment, but it’s quite mad to think your album has gone gold, yet alone in another country halfway across the world!

Sometimes it’s good to process, and sometimes it’s just overwhelming so I try not to think about it (laughs). I just try to appreciate everything I’m going through in the moment though.

AM: That definitely makes sense, trying to wrap your head around all of this must be tough! I’ve read that you struggle with anxiety, which can often be triggered by having a lot to do and a busy schedule. How do you juggle taking care of yourself through self-care methods while also balancing all these opportunities you’re presented with?

Anne-Marie: For me, I actually love having a lot of things to do and being busy doesn’t trigger my anxiety. I’d rather have a very busy day running around! It’s more of people looking at me  which is really quite odd considering what I do (laughs). I don’t like looking into rooms, things make me nervous and panicky because I don’t know what people are thinking you know?

AM: With performing, does your anxiety flare up and get triggered or does it go away with all the things you need to focus on? Anne-Marie: When I’m performing it actually goes away and I think it’s because people expect something of me and they get that. They expect the music and they know it, so I know I’m not disappointing them since I’m playing my songs. It’s more of when I’m off stage that anxiety gets triggered. It’s scary to let people in and not know if they like me or not. So yeah, I’m still kind of learning about the anxiety, what it is, and being okay with having it.

AM: Speaking of fantastic opportunities, you’ve worked with many notable acts ranging from Marshmello and Clean Bandit to Ed Sheeran. What is your process for determining who you will collaborate with?

With Marshmello, he actually remixed one of my songs a few years ago, which I loved. We were both in London at one point and decided to meet up, really just to say hello and say how much I liked the remix. He was showing me a beat, and I kind of just sang along to it. It ended up turning into a studio session (laughs). We recorded the song “Friends” in only like 3 hours! Usually if I can’t vibe with an idea for a song in 15 minutes, I know I need to step away, and this just came so naturally.

For collaborations where I don’t write the lyrics, like for “Rockabye” with Sean Paul and Clean Bandit, I need to have a connection with the message. When I heard the lyrics behind “Rockabye” I was immediately interested since the message of the song hasn’t really been communicated before. Messages in music are very important and it all comes down to connecting with others.

AM: Quite a few of your lyrics focus on female empowerment and accepting who you are, and they all have a bit of a sassy edge, which I love. Living in the age of social media, where there is an increased need for validation and approval from others, how do you hope your words impact your audience?

Anne-Marie: I hope that they kinda get a place to be removed from what’s happening in that world and can listen to the lyrics because they connect to it.

When I was little, I had strong females like Christina Aguilera with "Beautiful" to look up to. I would listen to them on the bus ride home to help distract me from what was going on at the time and they would make me feel empowered. That really did make a big difference in my life, so I think strong women are super important for this generation as well.

I definitely don’t want to make music that doesn’t connect with people. In terms of social media, sometimes I open up Instagram and find myself looking at how many likes I have. At that point, I have to pull myself away, because it doesn’t really matter (laughs).

AM: I agree, it can be so hard to pull yourself away from social media when really all of that approval isn’t even real when you think about it.

Circling back to knowing when to step away from a session, what is your approach when you get stuck while writing? Do you usually just take the same approach of scrapping the idea or do you have other techniques you use to get through the slump?

Anne-Marie: Well, I always have a co-writer. That definitely helps because sometimes I can become my worst enemy you know? I’ll be in the middle of writing and start doubting myself and can get really angry. If I don’t vibe with the song, I’ll usually say to my co-writer, “I’m not feeling this” and they’ll say “No, no, let’s work on it for 10 more minutes” and that helps a lot.

Sometimes when I get stuck we will just vocal the track and return to it later, about a week or so later. I actually did this last week in LA! I didn’t really enjoy the song I was working on, but my co-writer had me record the vocals of what I had written. I came back to it a week later and it’s now actually one of my favorite songs I’ve worked on which is quite funny.

AM: That’s great that you have people who can push you out of your comfort zone! So I couldn’t seem to find this anywhere, but have you been to D.C. before?

Anne-Marie: Oh yes, I have! I actually played at the same venue (U Street Music Hall). I have really fond memories of the venue, so I’m really excited to go back there.

AM: Oh awesome, that’s definitely exciting! How does your hometown of Essex differ from Washington, D.C.?

Anne-Marie: Well my town is very small, so coming to a place that’s so large is quite overwhelming. It’s really beautiful there though. I like the food, the foods great! The architecture is fantastic…I actually really love old architecture and the city is full of it.

Great, well those are all the questions I had. Once again, thank you for taking the time to call me and I hope you have a wonderful time when you come to D.C.!

Anne-Marie will be playing a sold out show at U Street Music Hall on Wednesday, September 26.