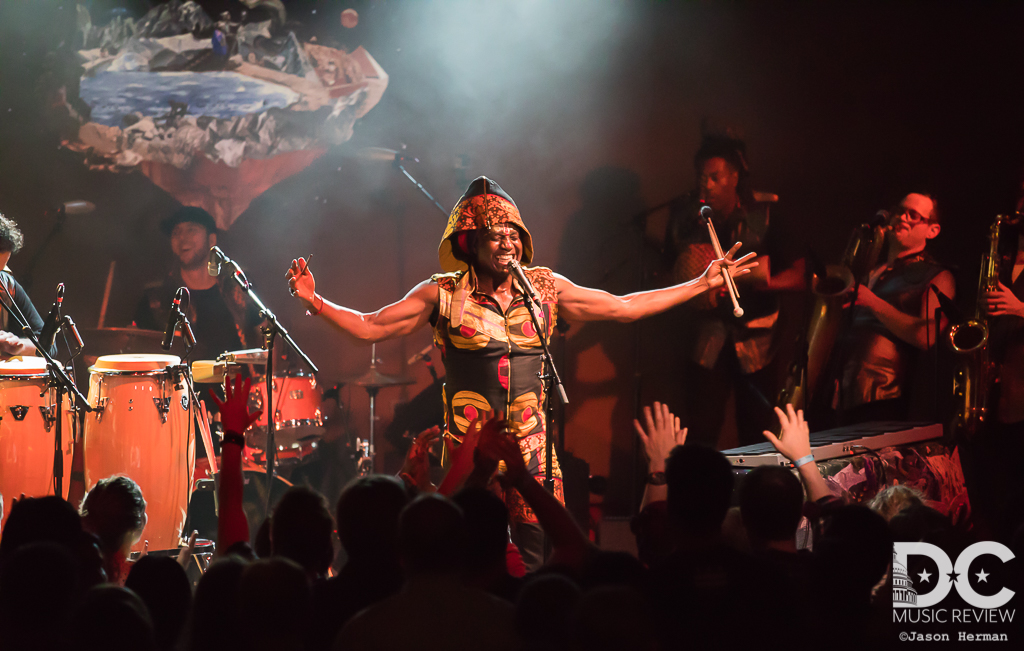 Updated January 22, 2018:  Audio recordings for both nights have now been placed in article. Antibalas, a 12-piece Afrobeat funk band, geared up for their encore performance of a two night run at The Hamilton on January 12, 2018. The diverse, smartly dressed crowd buzzed in anticipation as they waited for the Brooklyn based band to take the stage. By the end of the opening act — a rousing performance by local band DC Highlife Stars — a crowd had formed at the base of the stage, creating a tightly knit budding dance party. Every seat and bar stool were occupied, with the general admission pit spanning the entire length of the stage, brimming to capacity.

Despite the unseasonably balmy January weather, walking into The Hamilton on Friday, January 12th,  was like a cool escape into an early 20th century speakeasy. Craft beers, perfumes, and choice dishes wafted through the air amid excited chatter.

When Antibalas piled out onto the wide stage, they were met with a deafening cry, as frontman and percussionist, Duke Amayo welcomed the crowd with open arms, bellowing, “DC!”

“Nyash” kicked off the evening with numerous, if not all of the instruments blaring simultaneously. Horns, bass, percussion — all the members of the band played big, with instruments both complimenting and challenging one another. Immediately, the dance pit in front of the stage was a sea of movement. There wasn’t a still person in the venue, with even those lurking by the back bar unconsciously bopping along.

From the very first notes, it was clear that the band was ready to put their all into this second night’s performance. Martin Perna, bandleader, baritone saxophonist, and band founder ended the opening track by pulling out a towel to catch the beads of sweat that had formed on his brow.

The following song — “The Ratcatcher” — began without pause from the former. Throughout the evening’s performance, it was difficult to tell when one song ended and another began, so the entire show felt like one big cohesive jam, which lended to a massively fun time. As two girls passed me in search of their friend, I overheard one say, “Alright ladies, see you on the dance floor.” The venue was no longer a restaurant, or even a place to cozy up in the corner and enjoy an intimate night together. It was a party — for everyone in attendance. Amayo had a constant grin on his face, looking like he was having the time of his life.

And even though it was the band’s second night at the Hamilton, they were just as eager and put their all into the encore performance. Antibalas are wildly talented, with each member having multiple areas of expertise, as well as incorporating instruments I’d never even seen or heard before. For instance, one member went from playing the flute to the quijada (better known as a donkey jawbone), and back to the flute again. Utilizing the shekere, a West African percussion instrument, as well as the quijada, Antibalas has established a unique and truly special sound. Although all playing wildly different, and sometimes perhaps opposing instruments, the 12-piece band played as one cohesive unit, creating one powerful sound as they balanced and complimented each other’s sounds and rhythms.

The bar area emptied out as the setlist progressed as the concert goers traded their bar stools for the dance floor. Infectious energetic Afrobeats and stairs (in heels) are a dangerous combination. We watched many a person nearly lose their balance on the stairs while attempting to carry their drinks, navigate the stairs, and dance in beat to an unending high energy songs. No matter how many small portions of alcohol were accidentally spilled in a sacrifice to the rhythm or how many last minute clutches to a pole or handrail were made, nothing could put a damper on the exuberant vibes in the Hamilton on Friday night.

This evenings's performance concluded with a grateful speech by band founder Martin Perna who who said, "Twenty years ago this was my dream and for 20 years this was my reality.  We will be here for 20 more. We still have more tricks up our sleeves... even though we do not have sleeves.” (Editor Note: The band's outfits were all sleeveless.  See the photo gallery below for photographs of the band and their outfits. )

Click here to see the setlist for Antibalas' performance at The Hamilton on January 12, 2018

Enjoy photos by our photographer Jason Herman of Jason Herman Photography, and audio of both nights by Will Urquhart and Alex Leary.

For more information about Where the Gods Are in Peace by Antibalas please use this link to the iTunes store.