Aqueous Returns to DC with Two Sets at Union Stage 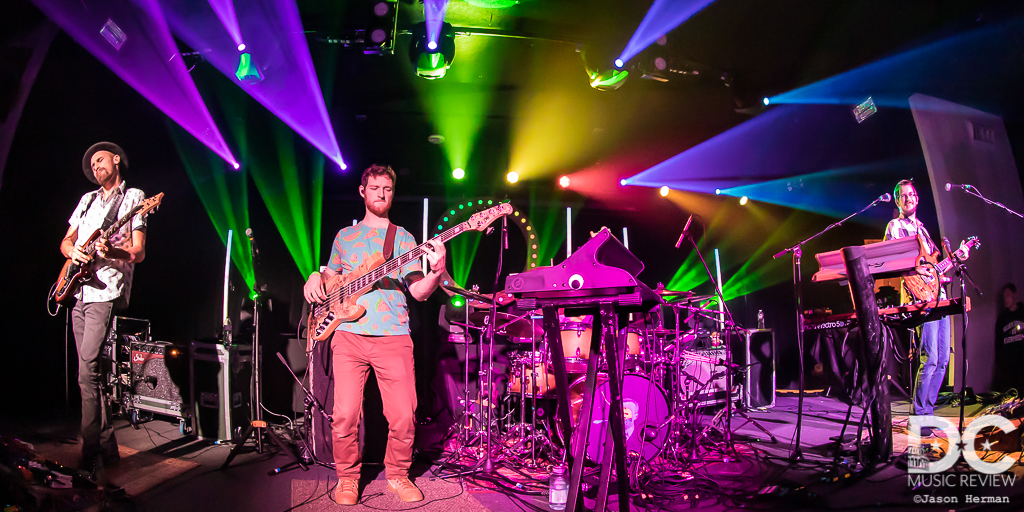 The Buffalo-born "groove rock" outfit, Aqueous, brought their tour to Washington, DC in early November, playing two sets of exploratory jam-rock for the first time in the nation's capital. This was the band's first gig in the District since 2016, as their fan base has grown over the last two years to fill the Wharf's intimate basement venue. Aqueous delivered a Saturday night rager that will hopefully lead to many more DC bookings in 2019 and beyond. Supporting Aqueous for a few dates on their tour, the Chicago jam-band Mungion opened the show, delivering a high-energy set that showcased their genre-blending compositions and high-flying improvisational style. Mungion's music bounces between heavy metal, funk, hard bop, and more. It's frenetic and engaging, but never disorienting or meandering. The songwriting,  while complex and intricate, is accessible and simply a blast to dance to. We expect to see a lot more of Mungion in the years to come. Taking the stage close to 10:00 PM, lead singer and guitarist Mike Gantzer greeted the crowd with a huge grin and declaring, "We've got two sets tonight. Let's have some fun." The ensuing two sets showcased Aqueous's range in songwriting and structure, improvisational chops, and relentless energy. The festivities kicked off with the epic prog-rock composition "Weight of the Word," and after the downtempo funk of "Marty," the band played a song off their new album, Color Wheel. The new song, "Realize Your Light" allowed keyboardist/guitarist David Loss an opportunity to serve in the lead vocal role in a mellowed out, disco-adjacent tune.

But the highlight of the set - and arguably the show - came in the form of "Numbers and Facts," the longest jam of the night. As soon as the band set out into uncharted territory, they attached to an infectious, simple guitar riff, expanding on it little by little before climbing to an intense peak and dropping back into the original riff. Eventually, the same riff would give way to a dueling guitar section, returning again to the original theme before returning to the conclusion of the song. Aqueous manages to lock-in on jams like this several times a night, and sometimes several times in a single set. The band would conclude the first set with a similarly stellar jam out of "All In" and returned for the second set with the same tenacity and purpose. "Don't Do It" provided the main launchpad for the second set and, with Loss on the keyboard, the band veered into trance-infused electronica. The band's relentless energy had the crowd in the palm of their hands all night and continued through the final note of the "Uncle Phil's Parachute" encore.

As the band continues to grow, both in popularity and musically, we expect many more appearances in DC in the coming years. Until then, the soundboard for this show can be found on nugs.net to relive the epics jams from that November night at Union Stage. Click here to see the setlist for Aqueous' performance at Union Stage on November 2, 2018

3. Warren In The Window Click here to see the setlist for Mugnion's performance at Union Stage on November 2, 2018 Click on image above to purchase the concert soundboard