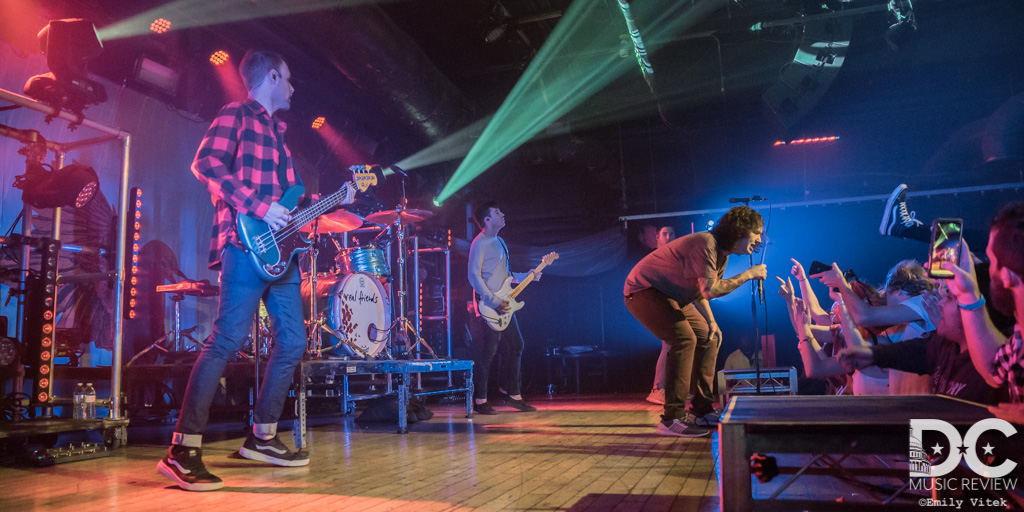 On a chilly Sunday evening, Baltimore Soundstage was filled with hundreds of energetic young adults waiting to jump around and sing their hearts out in a sea of strangers to Real Friends, a pop-punk band from Tinley Park, Illinois. The event certainly appealed to a specific fan base, with the majority of the fans in attendance ranging in age from late-teens to mid-twenties, sporting colored hair, piercings, and tattoos. While some of the fans hung back by the bar area, most of them crowded around the wooden stage, continuously checking the time on their phones and waiting for the lights to dim indicating that the bands were about to go on stage.

Real Friends is on tour to promote their third and newest album, Composure, which was released earlier this summer. This is the band’s first album since their summer 2016 album, The Home Inside My Head. Later that same year, frontman Dan Lambton shared via social media that the band would be taking some time off so he could focus on addressing his mental health. It was later revealed that Lambton was seeking out treatment for his bipolar disorder which had previously gone undiagnosed. After Real Friends had been quiet since the announcement of the hiatus, fans were surprised by Composure, which was announced June 2018, less than a month before its release. After spending the summer on the last run of the Vans Warped Tour, this is the band's first tour since the album’s release. With songs like “From The Outside”, “Smiling On The Surface”, and “Get By”, fans were able to get an honest glimpse into Lambton's struggle with mental illness and his journey towards recovery. In the title track, “Composure”, Lambton sings, “I'm reclaiming my composure / Lately, I've been smiling, pretend to be stable”. In another song, “From the Outside”, Lambton addresses how appearances can be deceiving for invisible illnesses, where much of the illness is internalized and not apparent to outsiders.

On the inside I'm still sick

The pill's a temporary fix

//  "From the Outside"  from Composure Real Friends opened up their set Sunday evening with the song “Me First”, the first track on Composure. An upbeat melody with a catchy chorus, fans in the crowd jumped while singing along about frustrations and despair in relationships. With no barricade separating the stage from the crowd, fans launched into the air and crowd surfed their way to the stage as soon as the song began. With no security guards to catch the crowd surfers, fan after fan was dropped directly onto the stage only to quickly pick themselves up and leap back into the sea of people. The Halloween themed music video for “Me First”, released two weeks prior to the show, juxtaposes the emotional content of the song by depicting a woman chasing the band members around a house with various weapons, ultimately serving them on a silver platter at a dinner table.

Real Friends played other songs off Composure, including “Unconditional Love” and “Get By”, in addition to their older hits like “I Don’t Love you Anymore”, “I've Given Up on You”, and “Mess”. With lyrics that tackle common issues among young adults, such as love, heartbreak, and struggling to figure out your identity, fans found solace in the relatable topics and passionately belted the lyrics while waving their hands in the air. Kyle Fasel (bass), Dave Knox (guitar), and Eric Haines (guitar) kept the energy high by switching up their positions and moving across the stage. In the middle of the set, Lambton asked the audience if any fans knew all the lyrics to their song “Late Nights in My Car,” which has nearly seven million plays on Spotify. One fan, Hanna, was invited up on stage to sing and be a member of the band for those three minutes. With the crowd surfing and other integration of fans into the set, Real Friends made a point to express that the evening was all about having a good time and meeting new people. In response to one fan who posted on Twitter earlier that day that she wanted to attend the evening’s event but did not have any friends to go with, Real Friends replied “a show is a great place to meet new friends”. Then during the set, Lambton paused between songs to say, “I personally don’t give a s**t if you know the next two songs or not, all I give a s**t about is that you have fun”. Band members and fans alike donned smiles during the entire set, and it was evident that everyone in that room was exactly where they wanted to be. The USA tour continues through late November, and then Real Friends has some time off for the holidays before they embark on their Latin America tour in February 2019. You can check out the music video for "Me First" below. Composure is available for streaming on Spotify, iTunes, and Youtube.

Click here to see the setlist for Real Friends's performance at Baltimore Soundstage on November 11th, 2018.

2. Smiling on the Surface

4. I Don't Love You Anymore The Home Inside My Head Maybe This Place Is the Same and We're Just Changing Put Yourself Back Together