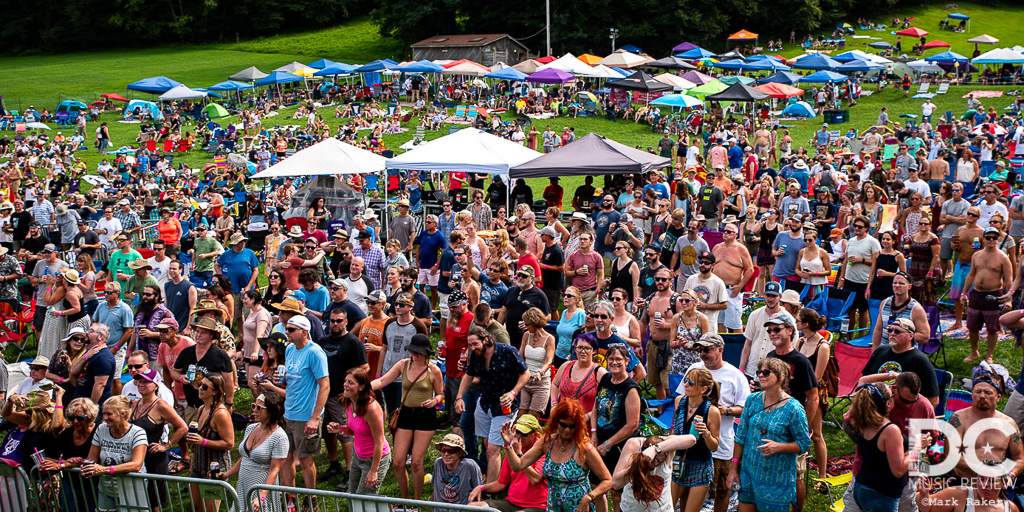 The 26th annual Hot August Music Festival was held on Saturday, August 18, 2018 at Oregon Ridge Park in Baltimore County. The festival certainly lived up to its name, as the weather was warm and the music was hot. With non-stop music from 11:30 AM until 10 PM, there were 13 bands spread out on 3 stages, and in the VIP area. Hot August is a one day festival that is jam packed with things to do. It’s an opportunity for people to see their favorite bands, and also experience musicians they haven’t seen before. The three stages are spread through the park, and the 2 smaller stages were surrounded by trees, which provided plenty of shade. The day started off early on the Main Stage Omari Banks, a former professional cricket player from the West Indies. He is an international reggae musician who has played sold out shows in Europe and the US. The NY Times said, “He sounds like a cross between Bob Marley and Bob Dylan.” On the Professional Vision Zeiss Stage, the local Baltimore-based Dirty Grass Players played their mix of Bluegrass and Newgrass for a largely hometown crowd. Some of the audience was seeing them for the first time; others are long time fans, with a shout out to local fan Jason for attending his 50th show. Another local Baltimore DC area brand kicked it off on the Guaranteed Rate Back to the Farm Stage. The Hall Williams Band, the winners of Baltimore’s WTMD block party in 2017, combine roots, rock, funk, jazz and jam. Hall Williams, singer, songwriter and lead guitar player, says he wants to heal the world through his music. Other local talent, Ron Holloway and Rachel Ann Morgan guested on stage during the set. DMV fan favorite Cris Jacobs returned to Hot August for the third time, this time playing with the Cris Jacobs Band. In March 2017, Rolling Stone Magazine named Cris one of the 10 New Country Artists You Need to Know. The band plays a mix of blues, country, rock & roll, bluegrass, soul, R&B. Jacobs, Todd Herrington, Jonathan Sloane and Dusty Ray Simmons have been crossing the country this year, including opening for Willie Nelson and Sturgill Simpson in May and playing on July 4th with Phil Lesh & The Terrapin Family Band in the Bay Area. The Washington Post describes Austin's Whiskey Shivers as “bluegrass-fueled Americana for a generation that grew up listening to punk rock. This group of 20 somethings plays banjos, fiddles and washboards at breakneck speeds while singing high, lonesome harmonies about love and video games." Hot August was their last show before heading to Germany.

"Watch out for Selwyn Birchwood…a genius revelation and a pleasure. Roaring Fender Strat and down-south lap steel guitar." --Blues Matters. Birchwood started playing the guitar at 13 and shortly after he found the blues and blues fans are glad he did. He is touring both in the US and overseas this year. Marcus King’s current tour has been entertaining audiences all around the US before going to Europe in October. His music is reminiscent of the Allman Brothers and Otis Redding. In addition to his own band, King has played with bands like Tedeschi Trucks Band and Pigeons Playing Ping Pong. They have a new album, Carolina Confessions, which will be released in October. Two of the new songs, "Welcome 'Round Here" and "Homesick," are available online via NPR.

Nikki Hill from NC shared her energy with the crowd.The rock roll rock coming from the stage was contagious. Hill did a mix of old and new songs that kept the audience moving and grooving. She is spending August on the festival circuit.

Baltimore Talking Heads fan band Psycho Killers drew a big crowd, despite the fact that is started raining during their set. The rain was came during “Once in a Lifetime” - Letting the days go by,

let the water hold me down
Letting the days go by,

​ "Once In  A Lifetime"  by Talking Heads

And the water did not hold them or the fans down. Cris Jacobs joined them on the center stage for “Take Me To River.” Psycho Killers will be playing Oct 19 at Union Stage in DC and November 2 at the Baltimore Soundstage.


Karl Denson’s Tiny Universe expanded new fans horizons at Hot August Music Festival. Hailing from Santa Ana, California Karl Denison is a funk and jazz saxophonist, flutist and vocalist. The center stage was thick with funk as the band jammed for a grateful crowd. At one point, D. J. Williams hand over his guitar to Eddie Roberts and then danced in the back of the stage. That moment personified the pure joy for music which was obvious in both the band and crowd. As the sun began to set Trampled By Turtles played their last local 2018 scheduled show. They are continuing around the country and heading to Europe in November. From their beginnings in 2003 they have shown great synergies. Trampled By Turtles share the stage and allow each member to shine. The bluegrass sounds went through changes in tempo that kept the audience involved and waiting for more.


After a day filled with great music,The Revivalists, an American rock band from New Orleans, ended the evening on a high energy note. The band’s lead vocalist, David Shaw, has a strong voice that sounds the same in concert as it does on their albums. Several times he left the stage and came down to sing at the rail. The energy from the final set carried Hot August fans all the way home.

In addition to the music on the main stages, The Clavicles, Daisy Castro & Brian Lee, played in the VIP area.

Lastly, and very much worth noting, a number of the bands did songs as a tribute to Aretha Franklin who was very much on people's mind having passed away two days earlier.

See you at next year's Hot August Music Festival! Marcus King is all smiles at Hot August Music Festival