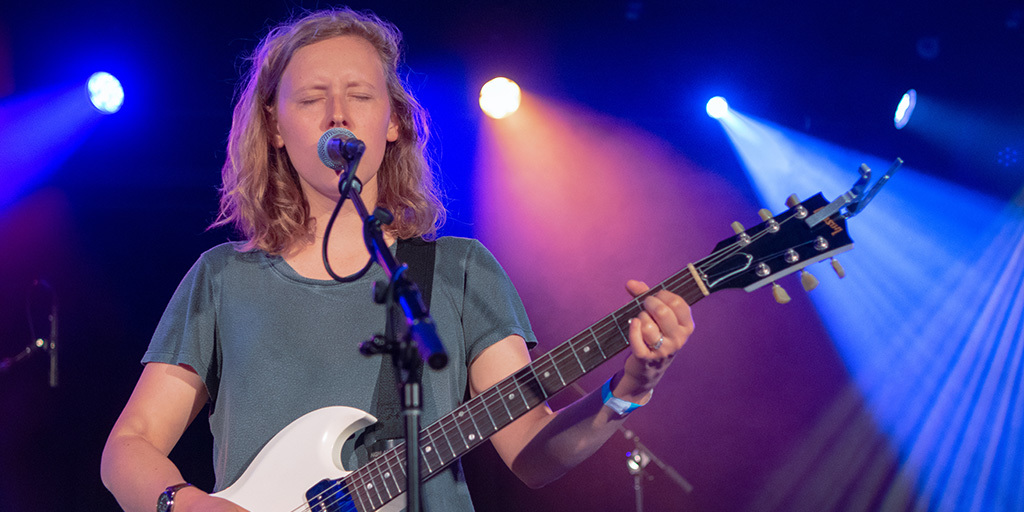 “Wow...this has never happened before...we’re not quite sure what to do,” remarked Alexander.

This genuine humbleness is exactly why Bad Bad Hats is making a splash on the indie rock scene. Marrying pop inspired guitar riffs with introspective lyrics about unrequited love, lust, and past relationships, the band not only writes relatable music—they are relatable. They too are nervous (in Alexander’s case, this is from way too much cold brew coffee), silly, and a bit shy. To top it all off, they’re hilarious too.

While the band jumped into the first three songs in a no-nonsense fashion, what followed was quite the opposite. Alexander dove into commentary about how difficult it was to combine dancing, singing, and playing the guitar, the convenience store that had her back during college, and her study abroad experience in Paris. With every witty remark, the room filled with giggles as the audience identified with Alexander’s experiences.

“In college, I studied abroad in Paris...and I realized just how not fancy or stylish I was” quipped Alexander, in the midst of tuning her guitar.

“You know, I usually just choose from one of ten squares and think ‘Oh, this one will do’. But there I was, dressed in tights, a dress, and a leather sport coat with a baguette in my hand.”

With their unique blend of self-deprecating comedy and incredibly catchy tunes, Bad Bad Hats is quickly cultivating devoted fans, as evidenced by the vast majority of the audience lining up to meet the band after the show. Get yourself to one of their shows to witness the two-for-one special before the trio climb to the top of the indie scene.

Bad Bad Hats are currently on a nationwide tour, and will be releasing a new record, Lightning Round, on August 3.