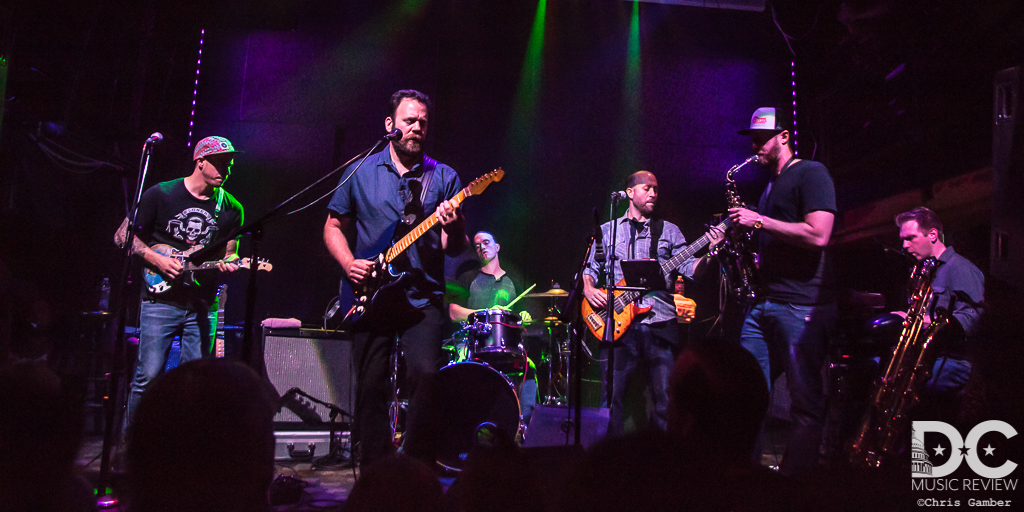 Seven years ago, Charm City-based jam band, the Bridge,  “retired.” After a decade of releasing original music, touring nationally, supporting successful bands like Umphrey’s McGee and moe., and garnering a fiercely devoted fan base, the band couldn’t sustain itself year in and year out. For Thanksgiving 2011, instead of their annual celebration on the Wednesday before the holiday, the band and its fans shed tears together at Rams Head Live as the six-piece ensemble, comprised of Cris Jacobs (guitar, vocals), Kenny Liner (mandolin, vocals), Patrick Rainey (saxophone), Dave Markowitz (bass), Mike Gambone (drums) and Mark Brown (keyboards), played what was supposed to be their final concert. In the years that followed, the Bridge has reunited for several shows, but hadn’t returned to the venue they had played the most in their career: Baltimore’s 8x10. From 2006 to 2011, the Bridge played dozens of shows at the Federal Hill nightclub during summer residencies, playing weekly for their dedicated fans. So when the Bridge announced that they’d play a three-night run, recreating shows from those years, a celebratory and nostalgic energy immediately grew around the gigs for band and fans alike. They aptly named the event “Coming Home” and announced a trio of local opening acts, Grande Ole Ditch, Jordan August, and Tim Nodar.

Upon taking the stage to a roaring applause, the Bridge opened their return to the 8x10 with “Brother Don’t,” starting things off with a high-energy rocker and featuring the first of many outstanding guitar solos by Cris Jacobs. After greeting the crowd, Liner noted Jacobs’ advice to the band before the show, “There’s going to be a lot of energy in the room. Don’t get too excited.” The band handled the energy well, sounding tight and well rehearsed all weekend. After going on to forget some lyrics to “Get Back Up,” Jacobs joked with the crowd, “I promise not to forget any more words… this set.” Recreating a show from July 2009, the first night of the run featured a career-spanning setlist with early favorites, like the instrumental “Pick a Boogie,” and late releases, including “Rosie” and “Chavez” from the band’s final album, National Bohemian. This show also featured a particularly funny moment as Kenny prepared to begin the beat-box intro to “Drop the Beat,” a song that he insisted at their final show in 2011 would never be played again, regardless of whether or not the band would reunite.

Night 2 of the run also featured a retrospective set that was originally played on the same date seven years earlier, June 22, 2011. This was a particularly special show for the band to choose because, if not for this run of shows, it would have been their final performance at the 8x10. Opening with the funky and soulful “Shake ‘Em Down,” the Bridge would later perform the first song they ever released on a studio album, the instrumental “Backdoor Betty.” After the clock passed midnight, the 8x10 celebrated the birthdays of Mike Gambone and Patrick Rainey, and the band gave Patrick an opportunity to take lead vocals for the hilarious cover of “Wooly Bully.” Kenny Liner of The Bridge

Before the third night of the run, the Bridge played an exclusive “sound check” set for fans that had attended all three shows before the doors to the 8x10 opened. Having actually forgotten about this part of the weekend, the band joked with the fans about the fact that they had already sound checked earlier that afternoon. With no more than 20 fans in the room, the band went through several songs that didn’t find their way into any of the set lists for the run, including “Rising Sun” and a cover of “Get Out My Life Woman.” The intimate crowd hooted and hollered between songs, showing their love for the band and Kenny thanked everyone for supporting the Bridge after all these years and coming out for all three nights of the reunion. To that I say, “Kenny, the pleasure is all ours.”

For the final show of the weekend, the Bridge went back to their roots, recreating a show from the summer of 2006. Kenny joked before the band played “Express Yourself” that those shows were marked by a lot of covers as they were building their catalog and would release most of their original music in the latter half of their ten-year career. This show was no exception, with covers of “Chevrolet,” “Them Changes,” “Sneaking Sally Through the Alley,” and “Whipping Post” performed that night. “Sneaking Sally” also featured a sit-in by Pigeons Playing Ping Pong bassist, Ben Carrey, symbolizing a torch-passing of sorts from one Baltimore jam-band to the next generation of funk coming out of the Charm City. Mark Brown of The Bridge

Similarly to “Drop the Beat” on night one, this show also featured a bust out of sorts as Kenny again introduced a song that he had long ago insisted the band would never perform again, “Back in ’94,” a silly rap song about his days seeing the Grateful Dead and riddled with lyrical references to jam bands and their songs. Then to close the show, the Bridge fittingly played “Coming Home,” putting an exclamation point on a truly unforgettable run of shows.

One of the most remarkable things about this run was seeing the crowd’s enthusiasm. Not only did all three nights sell out, but it was clear that everyone in the 8x10 each night was looking forward to these shows ever since they were announced last month, and was overjoyed to be in attendance. Seven years after their “retirement,” the Bridge’s fan base was as die-hard as it was in their glory years. Many in attendance had seen the band over 100 times. Almost everyone sang along with each and every song. Dave Markowitz of The Bridge

The Bridge’s music and their impact on the music scene in Baltimore and the larger DMV area took on lives of their own even after the band was forced to throw in the towel. That dynamic speaks volumes about the promise the Bridge had. Ultimately, the Bridge was a band that deserved far better than they got. In the days before social media really took off, they unfortunately couldn’t garner a large enough fan base outside of the mid-Atlantic to sustain themselves, but the community that formed around their incredible talents and music is a testament to their originality and true staying power. The Bridge’s music has lived on well beyond the Bridge, and the immortality of that music is something for which their fans can be eternally grateful.

The Bridge will (probably) return to Baltimore for their traditional Thanksgiving Eve show at Rams Head Live, but until then, we’ve got a few more great shows available on archive.org for our listening pleasure and live video of all three nights courtesy of the 8x10.