Baltimore’s ‘Future Islands’ Gets Political At The Anthem, Proving The DMV Never Truly Leaves You 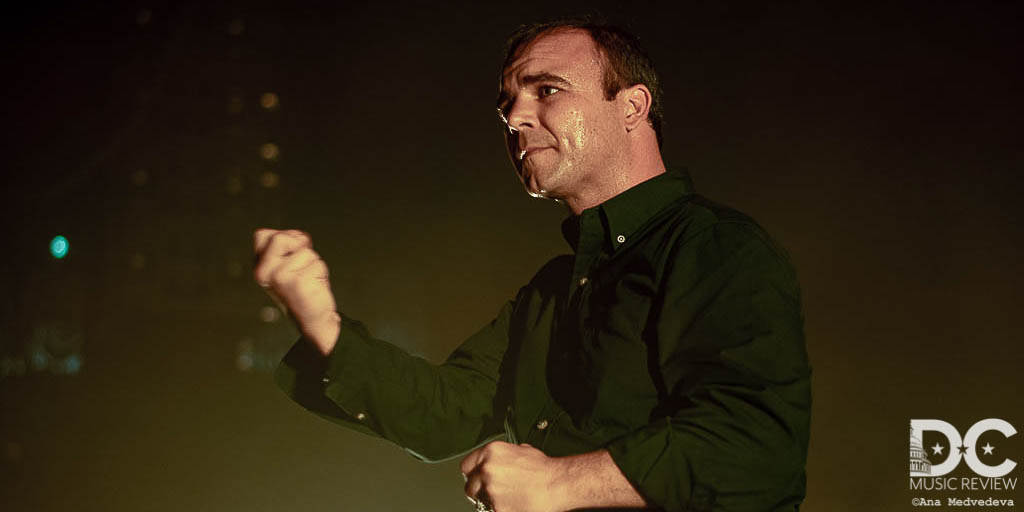 Friday night marked the 1,225 show of Future Islands. September 28 was the final date of a tour that started in April of last year.

Samuel T Herring (lyrics and vocals) and the band, comprised of William Cashion and Gerrit Welmers, were finally back in the District, a stone’s throw away from their Baltimore hometown. “It kinda feels like home,” Herring proclaimed after sauntering out to a dreamily ethereal intro. “It means a lot to come here. Some of the best venues in the country are in this state.” Rattling off the coveted local spots and nationally acclaimed venues of the DMV, Herring was warmly welcomed by a crowd of friends, family, and fans who were no less than thrilled to close out their tour with them.

The intro of “Ran” reverberated through my chest, the synth and heavy drums more electric and powerful than the recorded version, which felt almost dull after experiencing the live version.

And Future Islands is an experience.

Herring is well-known for putting his entire being into his music. Initially gaining attention and momentum for a 2014 performance  of “Seasons (Waiting On You)" on David Letterman, Future Islands have established themselves as a force to be reckoned with. The band was formed in 2006, are a synth-pop, indie, retro-lovers dream, with a sound that somehow feels both modern and decades old and band members who so obviously love what they do. However, without a doubt, Herring steals the show. With a voice that’s both rich and full, but also raw and, at times, carnal and somewhat demonic, Herring is larger than life.

Carving out the stage with wild and expressive dance moves, Herring’s movements were full of flailing limbs and raw energy that had him leaping from stage right to left. At times he would pound his chest with a force so powerful that the smacks could be heard echoing in the very back of the venue. Nothing he does is half-ass, every word, movement, and note felt like he was giving no less than 200 percent.

"With a voice that’s both rich and full, but also raw and, at times, carnal and somewhat demonic, Herring is larger than life."

Each song built upon the last, adding more fuel and heat to the room. Those who didn’t want to brave the sweaty throng of people tightly packed up front, opted for pockets of space in the back to fully unleash their dance moves. In fact, there wasn’t a still body in the venue, with everyone either bopping along unconsciously or jumping and flailing in proper Herring fashion.

During the rare bits when Herring stopped running around, he took a moment to get political. He started off mildly, announcing that “time heals all wounds if you’ve got the time. But I don’t got the time,” before launching into “Doves,” a track off the 2014 Singles.

When Herring took the chance to catch his breath, he preached that, “there are no free people in this country until everyone is free.” He added that there’s “no American dream until everyone has it. Who are we to decide who has what??”

Shortly after, Herring had a wardrobe malfunction that somehow had nothing to do with ripping his jeans. Instead, his belt broke, so while he tended to the issue off stage, his band took a moment to stall with the instrumentals off a new track, “Calliope.” It was so expertly performed, I wouldn’t have been surprised if the wardrobe goof was a planned part of the setlist. Whether their synth-heavy jam session was an impromptu jam or an intentional sneak preview off their new album, it was brilliant. “Seasons (Waiting On You)” shifted the show into its third and final act. So obviously the climax of the show, the famous single did not disappoint.

The song clearly represented a shift in the tone of the show. Listening to the applause that lasted one full minute after the final notes tampered off, watching Herring clutching his chest and wiping his sweat/tears, the Anthem felt changed. The rest of the setlist rode out the seasonal (pun attempted and intended) high and was played in an intense fervor, somehow with even more energy and passion than before.

Future Islands played a four song encore where every song was teased to be the last, until “Little Dreamer” was. Despite the slower tempo of the encore picks, Herring was as drenched and exuberant as ever.

The Baltimore-based band is one that must be experienced live in order to fully grasp the brilliance of their work. Characterized by simultaneously powerful vocals and instrumentals, neither suffered at the cost of the other flourishing. Both work together in an exciting explosion of sounds that transport their audience into a colorful, synth-infused dreamscape.

After watching Herring give his all and more Friday night, it’s a mystery how he’s toured for the past 18 months without losing his voice.

Click here to see the setlist for Future Island's performance at The Anthem on Friday, September 28, 2018

2. Beauty of the Road

5. Walking Through That Door

15. A Song for Our Grandfathers