Hudson Taylor Shines Brightly In The Limelight of The Lincoln Theatre 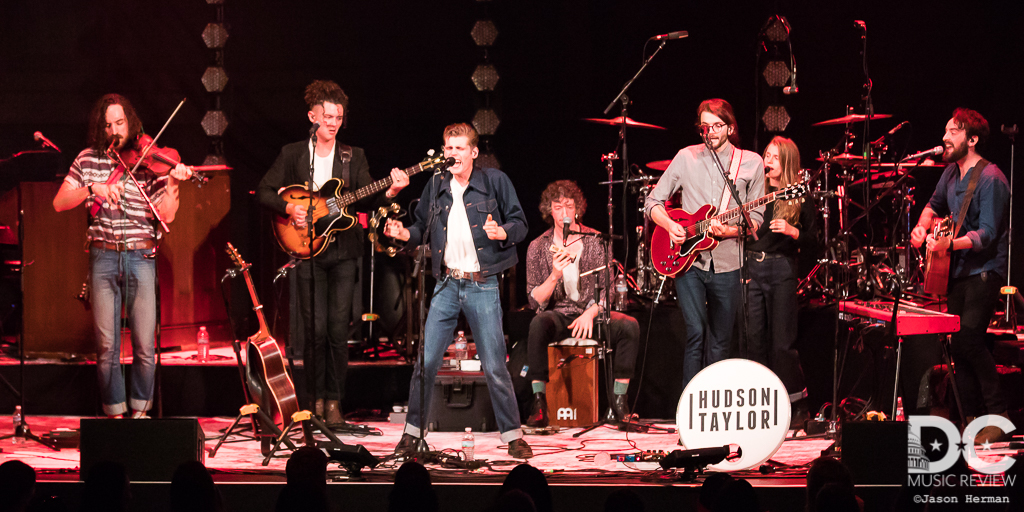 Tuesday night was a family affair at The Lincoln Theatre as indie-folk brother duo Hudson Taylor dawned the stage, backed by their sister Holly, in addition to another set of brothers playing backup instrumentals. The Dublin native duo opened for fellow Ireland native Hozier, but did not fail to stand out and strongly establish their presence in the DMV. Hudson Taylor is comprised of Harry and Alfie Hudson-Taylor who are so unconsciously in-sync, that they began adopting the same dance moves midway through their performance. However, generally, the brothers couldn’t project a more different image.

From afar, Alfie could’ve been mistaken for a James Dean-type, with an outgoing personality and shiny moves to match, while Harry appeared more reserved. However, they complement each other perfectly, with Harry providing the silken harmonies to Alfie’s crisp belting. Midway through “Care,” Harry leaned over to share a mic with Alfie to croon:

“For heaven's sake I have been screaming at you all the time.
It makes no sense how he treats you,
How could you miss the signs.
He's been cheating on you,
Messin' with your head.
I only say it cause I care,
Say it cause I care.”

The lyrics, the camaraderie, the chilling harmonies must’ve all struck a chord, for the audience broke out into deafening cheers, while I found myself sitting there, covered in chills, stunned. Only two songs into their too-short setlist and Hudson Taylor was already expertly illustrating the complexities of a toxic relationship. It’s apparent that Hudson Taylor draws influence from numerous indie bands, with their instrumental sound reminiscent of Of Monsters and Men and Noah and the Whale, while their harmonies are vocals are comparable to a folksy modern day Simon and Garfunkel and Fleet Foxes. Their sound, however, feels totally original and very authentic, producing feel-good music without verging on kitschy.

However, it is crucial to listen carefully, because underneath the guise of upbeat tunes are complex lyrics with deep meaning and emotion. “Don’t Know Why,” for example, was a crowd favorite, not only for its interactive sing-along aspect, the melodic instrumental harmonies, or the feature of the brother’s younger sister Holly, but also the emotional and relatable lyrics.

It’s easy to get swept up in the easy rhythm of the song, the melodic, "I don't know why and I don't know when, I need you now like I needed you then," but every once in a while, that violin wails, pulling you back in to focus on the lyrics pouring out of your mouth. In between the deafening applause was silence. The Lincoln Theatre hosted a very respectful crowd, one that sang along, but also knew when to keep quiet and just focus. The silence while the boys were singing was shocking. Everyone had their full attention focused on the stage, allowing Alfie and Harry’s rich and sweet vocals to ring out loud and clear . Hudson Taylor somehow made a 1,200 person venue feel homey and intimate, as though everyone in attendance was friends.

Hudson Taylor are a European treasure that are quickly infiltrating the hearts of North Americans everywhere. Currently on tour with Hozier, Hudson Taylor are sticking around the DMV for an extra day for their own headlining show at Songbyrd Music House this Thursday, October 4.

Hudson Taylor are finishing out their US tour before heading back to Europe for a slew of shows across the continent as well as a myriad of hometown shows. The brothers recently released their latest album Bear Creek to Dame Street in late September 2018. Click here to see the setlist for Hudson Taylor's performance at The Lincoln Theatre on October 2, 2018​