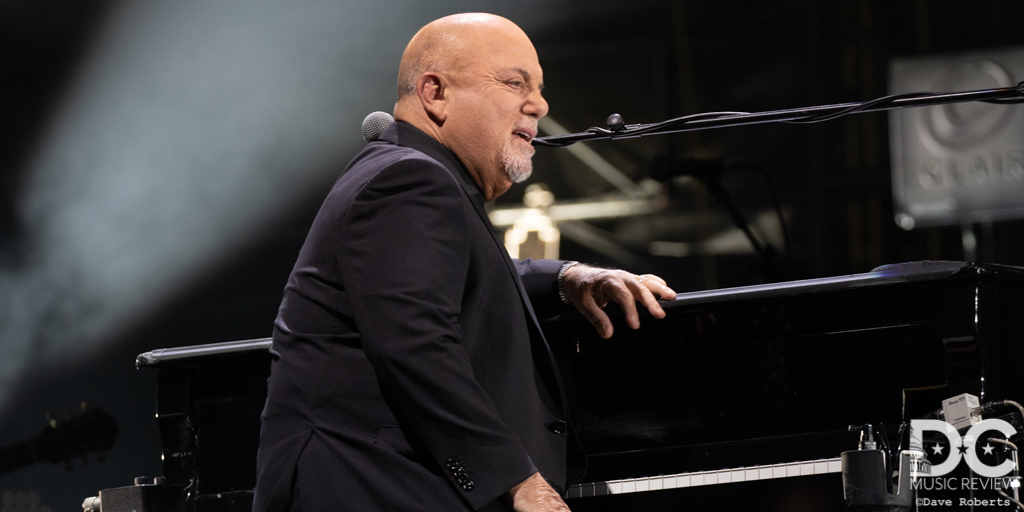 Billy Joel transformed Oriole Park at Camden Yards into a tapestry of music on Friday night, July 26, in Baltimore.  The weather was splendid for the sold-out crowd, and Baltimore was thrilled to have Billy Joel back in town after having played at M & T Bank Stadium back in 2015.  It’s hard to believe but this was the first concert ever held at the ballpark and hopefully from its visual success, there will be the possibility of more in the future.

Beginning the evening on an instrument other than what he achieved his fame on, Joel opened the night strumming his Fender guitar with “A Matter of Trust”.  He presented himself as not just a piano player, but also as a well-rounded rock-star with the guitar attitude to boot. If I would describe Joel over his career I would say he has always been a little outside of the music industry box and willing to take risks.  He always performs with a fun spirt, and this show was off to a great start. Next up was “Pressure,” and then Joel took a side street that led him into teasing Queen’s “Bohemian Rhapsody” and Hall & Oate’s “Rich Girl”. The trend continued occasionally during the set as the band would often hit up some classic, cover songs.

Even though Joel has not released any new material for many years, he doesn’t seem to have any problem selling out concerts around the globe.  Included in those shows is his monthly residency at Madison Square Garden in New York City where he has sold-out five years worth of concerts after becoming a franchise to the legendary performance venue in 2013.  Not only does he continue to play The Garden,  but Joel has played there over 100 times throughout his successful career, which is just amazing.

Billy Joel has unquestionably surrounded himself with some talented musicians. The current band members have a family-type bond onstage, as well as an excitement level that is noticeably contagious. As the longest standing member of Joel’s band since 1982, Mark Rivera took his saxophone on a musical adventure numerous times throughout the show. As the two weaved their way through their seductive version of “New York State of Mind,” Rivera has a luscious way of spreading musical love through his instrument that can heighten the receiving listeners arousal state by intoxicating their mind with such joyful sounds.

Another jaw-dropping moment in the performance was when guitar player and vocalist Michael DelGuidice took over the lead vocals for a spectacular performance of Giacomo Puccini’s “Nessun Dorma”.  An opera song that translates into “None shall sleep” tells the story of a princess and her marriage fate revolving around death  sent chills throughout the downtown Baltimore evening.

Percussionist/Vocalist/Saxophonist Crystal Taliefero hyped up an already energetic audience with “Dancing in the Street,” especially as she rolled out the lyrics “Baltimore and DC now”. This woman not only has a great voice, but knows her way around her percussion kit like a cheetah sprinting through her domain.  She has been in Joel’s band for almost 30 years, and is clearly a talent beyond measure.

And the highlights go on and on.

A setlist that ran 27 songs deep, and well over two-hours in length, was completely filled with hit after hit.  Camden Yards was altered from a baseball field into a giant sing-a-long party with one of the best rock and roll piano players ever.  Taking plenty of time to interact with the audience, Joel introduced many of his songs with personal stories, including the albums they were on and the years they were recorded. Classic songs from hit albums such as The Stranger (1977), Glass Houses (1980), and The Nylon Curtain (1982) dominated the set, but Joel definitely pulled a few deeper tracks out to play such as the jazzy “Big Man on Mulberry Street,” “A Room of Our Own,” and “Sometimes a Fantasy”.

Billy Joel has released only 12 studio rock albums over his lengthy career, with some bands having recorded that many records in the 1970’s alone.  But along with that, It would be impossible to deny the fact that the accomplishment that comes from writing and composing completely all of his own material is second to none.  With 33 Top 40 hits and five Grammy’s, all of those songs, all of those hits, Thank You Billy Joel.

The talent and energy that Joel continues to express through his live performances is document to a musician who has captured the musical hearts of fans from all over the world.  As he jokingly was trying to catch his breath noticeably into the microphone through his harmonica before playing his mainstay “Piano Man," Joel shared his humor, his stories and vast catalog of radio hits with a welcoming fanbase in Baltimore.  This was such a fantastic and memorable performance that will go down as the first and one of the best ever at Camden Yards.

Click here to see the setlist for Billy Joel's performance at Oriole Park at Camden Yards  on July 26, 2019

1 - Audience choice over "Just the Way You Are"

2 - With piano only outro "Layla" by Derek & The Dominos