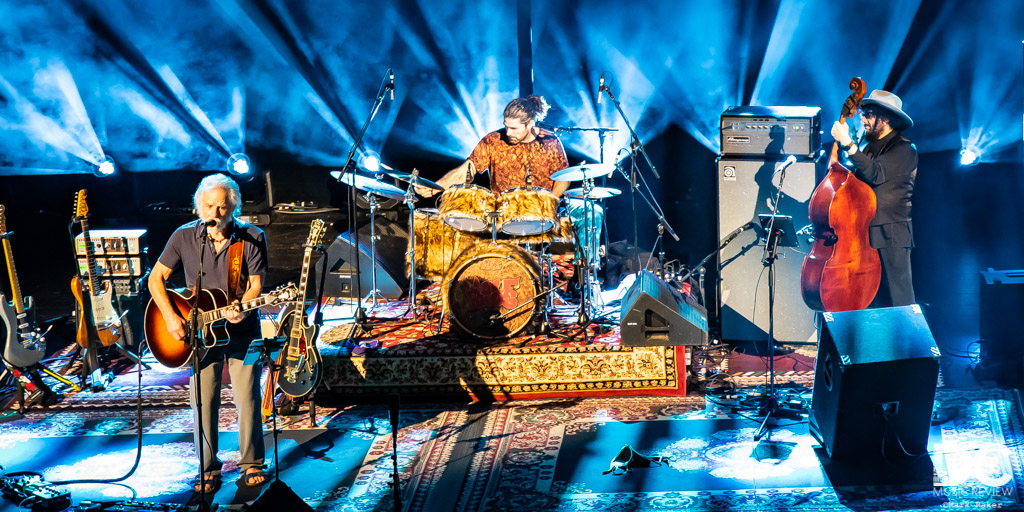 On Monday night, Bob Weir and Wolf Bros (bassist Don Was and drummer Jay Lane) graced the stage of the Warner Theatre in the heart of DC. This was a knockout show. It felt intimate, warm, and Bobby and Wolf Bros were on point with well-paced sets, fan favorites, sweet and surprising covers, and a guest appearance by DC-based John Kadlecik. Warner Theatre was a GREAT place to see this show. It's the kind of venue that holds just the right number of people to feel like a giant lovefest while still giving a great view from any seat in the house. With its elaborate chandelier and gilded interior and Bobby standing on a living room rug, it felt like a jamboree in a giant DC family room.  The night started off with a strong, extended "Jack Straw" where you could hear that the space perfectly held Bobby's crisp vocals. Next up was a cover of Merle Haggard's beloved "Mama Tried" followed perfectly by "Lay My Lily Down” from Bob’s Blue Mountain album, which felt like storytelling with a well-paced swagger, delicate harmonies, and a signature Bobby vocal growl as the song reached its pinnacle.

The set continued with the crowd favorite Grateful Dead song, "Loser," which transitioned smoothly into the Bobby & The Midnite's laid-back and seductive "Josephine." Weir delivered the song with some rasp and flirt to his voice as it built from a saunter to an all out strut. The audience hooted and howled and sang along to the lyrics, "rock and roll with you" until the song dissolved into a sweet fade out.

It felt like a collective smile ran over the crowd's face as the band pivoted into Donovan's "Sunshine Superman," which was a rocking, feel good song.  Next up was the cover of John Phillip's "Me and My Uncle," another Dead standard and crowd favorite. Bobby gave the audience some light banter while he tuned his guitar. He and the band then finished the set with Dead songs starting with a slow and dirty, easy yet guitar-wailing "West L.A. Fadeaway" and ending with a strong and fantastically lit "U.S. Blues."

Set Two started off strong  with a cover of Bobby Darin‘s strange and sad song “Artificial Flowers" which Weir has sung on occasion with RatDog and on solo tours. It sounded like something he wanted to give to us, something he was immensely enjoying, and that it was chosen with intention.

After an exceptional "Artificial Flowers" the band shifted gears and performed "Black Throated Wind." Weir's voice held this song so well and then moved into a comfortable "Playing In The Band" where the band was joined by John Kadlecik, founding member of Dark Star Orchestra (DSO) and former member of Further.  Kadlecik, affectionately referred to as 'John K' by his fans, took to the stage and propelled the nights music to new radiating heights. This is where the set hit a sweet spot, offering a loose and organic jam that dissolved right into "Scarlet Begonias," where they continued to toy with rhythm and sonic patterns with whimsy. John K left the mix as the band continued strong with the RatDog song, "Two Djinn" which was layered with funk-in-the-pocket goodness. Next they moved into the Dead's "I Need A Miracle" and then an impactful and heartfelt rendition of Bob Dylan's "A Hard Rain’s A-Gonna Fall."  The set was closed out with a rousing "Throwing Stones" which felt like a perfect choice for a show in the heart of DC.

For the encore, John Kadlecik rejoined Weir and Wolf Bros on stage to much applause and offered up a reprise of "Playing In the Band" which felt like a nice nod to closure for the evening. Then they gave the crowd some more with an uplifting "Touch of Grey" singalong to remind the audience that despite challenging times that may be concentrated in our fine city, "we will get by." Click here to see the setlist for Bob Weir and Wolf Bros performance at Warner Theatre on November 12, 2018. 1. Playing In The Band (Reprise) (with John Kadlecik)

2. Touch of Grey (with John Kadlecik)

It was a fine DC night playing on stage once again with my friend, @johnkadlecik. #BobWeirandWolfBros continues on in Philly tonight... pic.twitter.com/Ykiio9oaGp

2 - Bob Weir on Acoustic Guitar and then Electric Guitar