The Boys Are Back In Town as Greensky Bluegrass Performs in DC! 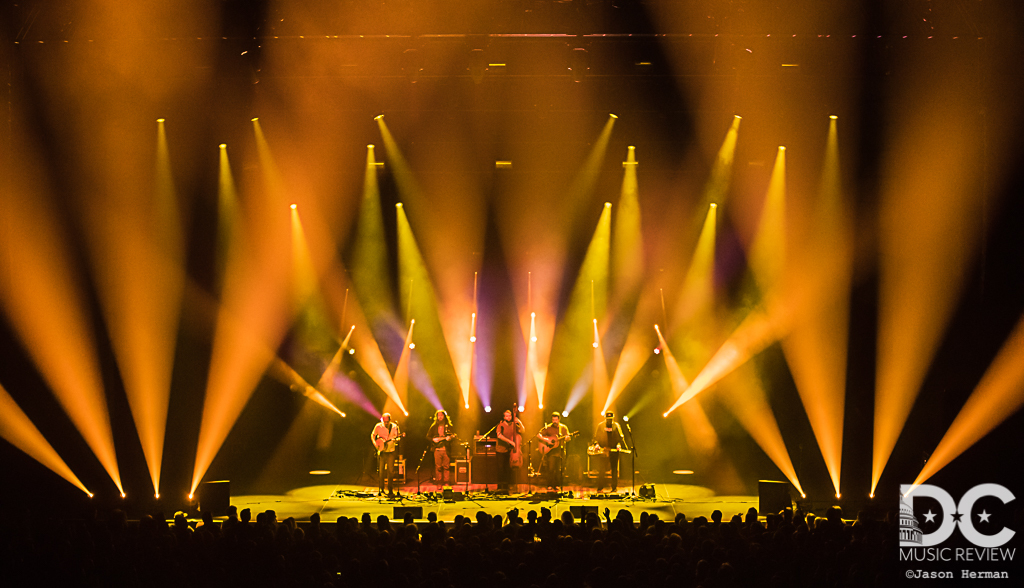 Greensky Bluegrass delighted fans at a sold out 9:30 Club, the first of a two-night run in Washington, DC. The talented Billy Strings opened, backed by his band which featured a deep resonating double bass, banjo and mandolin. Strings was a perfect pairing for Greensky Bluegrass and played an impressive set that featured a rendition of the Grateful Dead's 'China Doll.' Strings, who is known to break an occasional guitar string mid-song, kept his strings intact and delivered a high-powered performance.

Greensky opened with their Groundhog Day tradition – "Groundhog -> Handle With Care" (Editor Note: Greensky Bluegrass performed the same opening number during last year's Groundhog Day performance.) Dave Bruzza (guitar) sang lead for most of the night, leading one fan to lament "Is this a Bruzza-palooza or what?" Greensky Bluegrass, a Michigan-based quintet, has made it known how much they enjoy performing in the DC area, opening the Chrysalis Pavillion beside the Merriweather Post Pavillion last July.

Paul Hoffman (mandolin) proudly declared "it's good to be back again at the 9:30 Club" and shortly thereafter called Billy Strings back to the stage for a fiery sit-in. "It's good to be here! Lets invite him [Billy Strings] up!" pointing at Strings who walked on stage with a Fender Stratocaster in hand. "It's called an electric guitar everyone!" Hoffman commented. Unlike Bob Dylan's first electric performance at the Newport Folk Festival in 1965, where audience members hissed and booed at the presence of an electric guitar, fans were with stunned delight as Greensky Bluegrass debuted Chuck Berry's classic "Johnny B. Goode". Strings provided some serious guitar licks, at times losing himself in the music. The band alternated solos, led by Hoffman on mandolin and followed by  Michael Bont, (banjo) and Anders Beck (dobro). Towards the end of the song, Beck and Strings performed a Dobro vs Stratocaster duel and alternated solos as they faced off. The audience was floored by the sheer energy displayed and last notes of Johnny B. Goode echoed throughout the 9:30 Club. Strings left the stage with his Stratocaster held triumphantly overhead. Ander's face gave way to a  wry grin, acknowledging that Strings' Stratocaster may have bested him this time, or at least come close to it.

After a long break, the band opened the second set with a cover of the apropos "The Boys Are Back in Town" by Thin Lizzy. The evenings musical challenges were not over as Paul  crossed the stage to duel with Anders – mandolin vs dobro – to the  delight of the crowd. The evening featured a moment honoring Hank Sacks, Greensky's publicist from Partisan Arts, as Beck beckoned him to the stage to wish him happy birthday. There is nothing like 1,200+ campers wishing someone a heartfelt happy birthday.

The evening concluded with an impressive "Fixin' To Ruin" with Billy Strings once again joining Greensky Bluegrass on his electric guitar. The stage was set for their debut performance at The Anthem on Saturday. On Saturday, Greensky made their way across town to The Anthem at The Wharf. The question on many fans' minds was how full DC's newest, 6,000-capacity grand concert hall would be. Greensky Bluegrass has sold out large outdoor venues like Red Rocks in Colorado, however The Anthem might prove to be a different kind of beast.  DC Music Review learned early Saturday,  that 4,400 tickets had already been sold, and by the time venue doors had opened the number was 5,000 and growing. Well into the second set, it was easy to see the venue was slowly nearing capacity, with 5,500 campers celebrating another special evening.

Greensky opened the first set with a rare acapella performance of 'The Star-Spangled Banner.'  Barely a mile from the Washington Monument, 5,500 campers sang along with their band and as is Baltimore / DC sports tradition local campers loudly screamed “O's” as is loving tribute to the Baltimore Orioles. The rest of the night proved to be a memorable one, as Greensky Bluegrass proceeded to play hit after hit. As if to reiterate their authority on the DC musical landscape, the band brought back a “Boys are Back in Town” jam during 'Little Maggie' and played  an inspired cover of 'Bone Digger' by Baltimore artist Cris Jacobs. Billy Strings again joined Greensky Bluegrass on stage this time with his acoustic guitar in hand. Anders smiled and  circled Bruzza and Strings as another guitar battle began. Before leaving the stage, Anders raised Strings hand aloft as if to announce a victor, with a hug and whispered words of appreciation. This evening was Billy Strings' last performance with Greensky Bluegrass on their 2018 Winter Tour and it is with little doubt that Greensky will miss the talented guitarist and their magical interactions with him. The evening ended with a strong performance of "War Pigs" by Black Sabbath.

Throughout the evening, Greensky Bluegrass made it well known how much they loved The Anthem as Paul Hoffman and Anders Beck repeatedly complimented the venue, indicating how much they look forward to returning to this spectacular venue. In a subsequent Facebook post the band said "Struggling to find the words to describe last night. The Anthem is one of the most impressive venues we've ever seen."

DC Music Review eagerly awaits February 2019,  when Greensky Bluegrass hopefully returns to DC. Just like this year, we hope that they perform an intimate show at the 9:30 Club and then an all out packed jamboree at The Anthem.

Click here to see the setlist for the Greensky Bluegrass performance at the 9:30 Club on Feb. 2, 2018.

4. Brining in the Georgia Mail

1. Boys are Back in Town  (Thin Lizzy cover)

3. Worries About the Weather

5. For Sure Uh Huh (Happy Birthday to Hank Sacks version, no verses sang)

1. Fixin' To Ruin (with Billy Strings on electric Fender Statocaster & Guido and Luke on woodblock in unison)

Click here to see the setlist for the Greensky Bluegrass performance at The Anthem Club on Feb. 3, 2018.

2. Living Over (lyric change "Wish I had more hands")

3. Room without a Roof

8. Little Maggie (with Billy Strings, "Boys are Back in Town" jam)

9. I'd Probably Kill You (with Billy Strings)

Please see our "Artist Spotlight" article on Greensky Bluegrass where you will enjoy an in depth and extensive photo gallery of the band.