Concert Reviews
By Will Urquhart / February 5, 2018 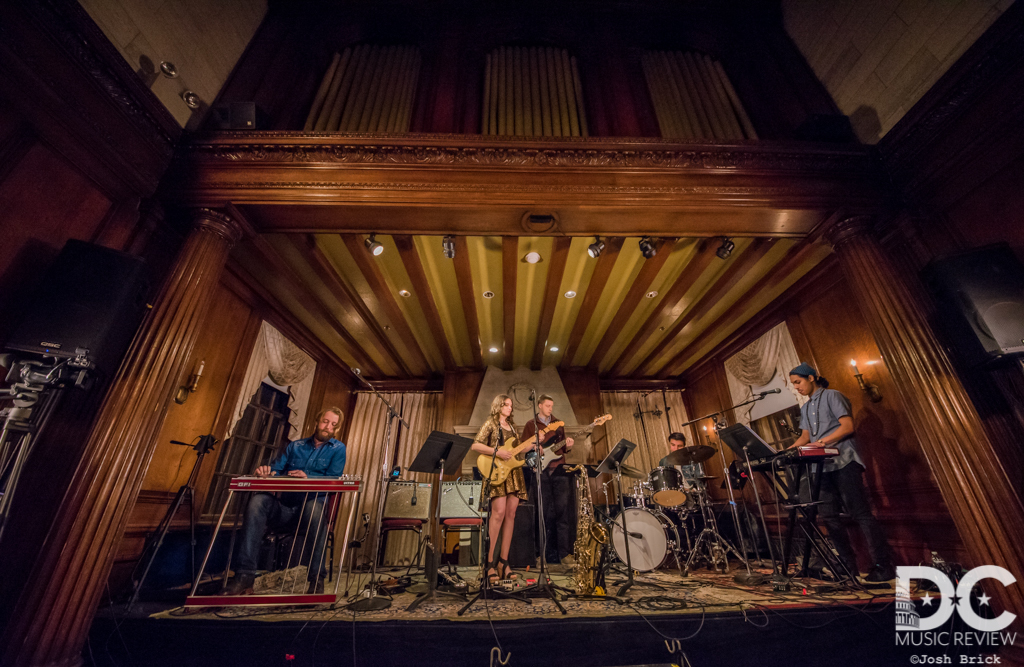 Gina Sobel closed out her run at the Artist in Residence program at the Strathmore Mansion last week with a powerful performance accompanied by several members of Choose Your Own Adventure (CYOA). Fans of the DC Scene-In-Review podcast will recognize this group, and their song "Spoiler Alert" from our last episode.

The show opened with Sobel onstage by herself, performing a new song that has yet to be recorded called "California Zephyr," before Ian Dansey hopped on stage to play pedal steel guitar on "Gotta Go." The rest of the night looked more like a CYOA show than a solo performance with Drew Kid (keys), Kris Monson (bass), and Joey Antico (drums) joined the pair. Most of the set featured original tracks by Sobel, with a couple from CYOA, and only a couple covers. The first was a moving song called "Pretty Heavy" by Lydia Ooghe, who has a sound Sobel described as "elf pop, in the best possible way." Sobel originally recorded this song by herself but later arranged it for the whole band. That was followed Rango II, by Vulfpeck, which Gina was not shy about calling her favorite of the two Rangos.

Next up was a surf-swing version of "Flight Patterns," a song that has been recorded as four distinct versions, all containing different lyrics. That was followed by her unique take on a 14th-century minstrel tune, called "Cock Robin." A particular highlight (embedded above) was a piece commissioned for the Strathmore program called "Gold Sounds." And to close the night, the crew played "World's Getting Loud," the title track off her most recent album.

The Strathmore Artist in Residence, now on their 13th year, seeks to support performers as they transition from amateur to career artists. The mansion provides a beautiful and intimate setting. According to their website, they've "mentored 76 young musicians, ages 16-32, since its inception in 2005. " Each month brings a new talent into the Strathmore Mansion. Be sure to check out their full class of 2018, which includes Drew Kid in March.

You can listen to the entire set below recorded by John Penovich, as well as photos from the night by Josh Brick of Josh Brick Graphics. And you can catch Gina Sobel with the Choose Your Own Adventure crew this Wednesday, February 7th at Gypsy Sally's for a release party for their first EP. They'll be joined by Buddha Cons.

Gina Sobel Artis in Residency at the Strathmore Mansion on January 31, 2018