Carlie Hanson Talks Authenticity and The Dangers of Hot Wings 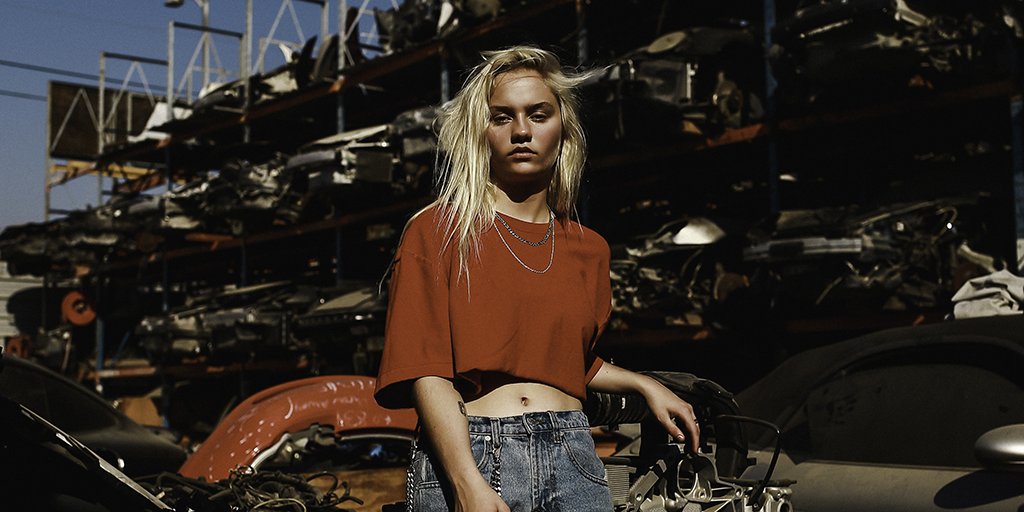 Greeting me from the other side of the line, Carlie Hanson singsonged, “What’s going on giiiirl?!”

The 18-year-old Wisconsin native is far from your average pop star—chatty and energetic, the more you talk to her the more it becomes clear that you’re getting the authentic Carlie. No censoring, no bullshit, no media training.

Needless to say, Hanson is incredibly talented to boot. Accumulating over 60 million streams on her first three singles, all independently released, Hanson caught the eye of numerous major labels.

Sultry and mysterious, Hanson’s voice bears resemblance to Halsey’s; Trap beats expertly layer on top of each other to support lyrics that almost beg to get stuck in your head, reminiscent of Kiiara’s “Feels”. It’s no wonder that Hanson attracted the attention and toured with the likes of Yungblud, gnash, and Jeremy Zucker.

Hanson will be joining Bad Suns on their national headline tour this spring, with a stop at the 9:30 Club on Monday, April 15th. Read our interview with the artist below and grab your tickets to the show before they sell out!

Signing To A Major Label

I wanted to start off by congratulating you on signing to Warner Bros Records in February. How was that process for you? I know a lot of people get flown out and schmoozed.

For a long time it was just me, my manager, and my two executive producers who were doing everything on our own. All of the last releases, "Only One", "Why Did You Lie?", all of them except for "Numb" was all us working together which was pretty fun. It wasn't a bunch of people throwing in their opinions, so it was very easy. From the beginning I knew what I wanted, what I wanted my music to sound like, what I wanted to be; so it was a very fun process, to be honest.

I did have Capitol [Records] fly me out before I even met my manager or made any music really...that was very, very crazy to me. They put me up in a hotel and my mom got to come out with me. It was very surreal to me, coming from Wisconsin, very dreamlike in the beginning. Meeting with all the different labels, doing trips out to New York and L.A. was very fun. But yeah, at Warner I found my team for sure.

You're releasing an EP this summer! Having released only singles before this, how was that creative process different for you this time around, if at all?

I wasn't really going into sessions being like, "Okay, I have to make a song and it's for this project." It was more so that I was making a bunch of songs every week, doing what I wanted to do with people that I vibed with really, really well. Right now I have over 120 songs I think, so it has been very difficult to pick the songs I want.

Being on tour with Yungblud and seeing how rock everything is got me really inspired to throw more guitars into my music. I'm such a big fan of Nirvana and am always listening to them, so this EP has a lot more guitars and drums incorporated into it. I'm really excited for people to hear the mixture of pop and hip hop with rock sounds that I've been playing around with.

It's cool that you're mixing in all of your influences; I know that Kurt Cobain is a huge inspiration for you, and so is Justin Bieber. I was curious as to how they inspire you since they're pretty different in terms of personality.

Like polar opposite! When I was younger, maybe eight or nine, I found Justin Bieber online and immediately was like, "Holy fuck, he's so young...he's just singing...you can get famous by posting covers!" He really started the trend of getting famous online. Not only that, but he's very talented and plays a bunch of instruments. Just to think of how young he was really got to me and made me think that I can do it too.

Social Media: Dude, It's Not That Serious!

Speaking of authenticity, I noticed on you carry that over to your social media. You have your humor, but you also don't shy away from showing off your glamour shots. Is that something that you consciously do?

I really don't think, I just do it on the fly. If you think too much about it, you end up getting into your head. My friends at home in Wisconsin will be like, "Oh, this didn't get like this many likes, this person didn't like this, should I take this down?" and I'm like, "Dude. it's not that serious!" So yeah, I just post dumb shit or when I think I'm sexy. [Laughs]

I found some tweets that I was curious about and wanted to get the backstory of, if there is one!

[Laughs] Nooooo...see that's like the Seth Rogen in me. There really is no meaning behind that one, just my friend Dale and I love to call each other hoes just as like...I don't know, that's just a stupid tweet is what that is.

Nothing wrong with being a hoe!

Yes, that is a real thing. As of lately, it hasn't been every day unfortunately, but before tour I was in this continuous routine of going to the breakfast spot right by my apartment pretty much every day. I'd go there and wouldn't take my phone; I just hate waking up and checking my phone right away. I think it's not a good habit to get into and I love to just be me in my own head for a little bit in the morning. So I'll just go to my restaurant with my notebook or a book and just chill by myself a little bit because I really need that alone time every now and then.

Does it help you creatively as well to have that start where you're thinking instead of seeing other content?

Definitely, I think it does help me! I'm a different person in the morning I feel like, so it's fun to just write down my thoughts. I'm a people watcher for sure...like a people listener. It's good to have my notebook with me in case I overhear a conversation and am like, "Oh, that's a concept.” I found myself doing that a lot and it really helped me with writing songs. People will say things in conversation all the time that I'll think, "Holy shit, that's something I could write about."

I know that you found your footing via YouTube, and I wanted to ask your thoughts on some of the drama that's been happening. So first off, Shane Dawson's theory on Chuckie Cheese pizza.

His theory is that they take slices from pizza that were uneaten and combine it all together. If you look at pictures of it, it's not a perfect circle.

I haven't really been keeping up to date with my YouTubers, I kind of like fell out of that a little bit which kind of sucks...I miss binge watching YouTubers!

Do you think that part of that is due to you being on the road so much and it's harder to keep up?

Yeah, when I'm on the road I definitely feel way more distant from social media in general. It's hard to be in reality but also on your phone trying to stay up to date with everything.

You've been on tour for pretty much all of last year and this year, which I'm sure takes a toll on you mentally and physically, especially since you're so high energy on stage. How do you take care of yourself while you're on tour or even after you finish a tour?

In Europe, it was legal for me to drink so I had to learn the hard way, like six beers in...to not get fucked up on nights before the show. Luckily, I got a really bad hangover on the second to last night of one of the tours. I just remember it being terrible; It's no fun at all, to be hungover on the day of a show or to be hungover at all honestly!

One thing I'm gonna fight for...and now I'm just going off on a tangent, but why is alcohol legal over weed? Anyways, going back to your question, [laughs] I just can't get messed up on tour. I'm glad I learned that and won't be doing it anymore.

But yeah, just eating healthy for sure. Oh my god, me and my drummer were in Texas for a show with gnash and right before the show, we went to Hooters. We ate a bunch of hot wings... like an hour before the show. We were dying in the green room bathroom and just not okay. Then on stage, he was apparently about to throw up during one of our songs. So watching what you eat and not going out too much.

No hot wings! It's kind of common sense honestly. The thing about touring is I don't think it's really taken a toll on me yet. I have fallen in love with everything about it! Now, whenever I come back home from tour I immediately after two days want to go back out. I'm sure this will fade eventually; People are always like, "yeah, you're gonna hate it when once you get older," but I'm super, super in love with it.