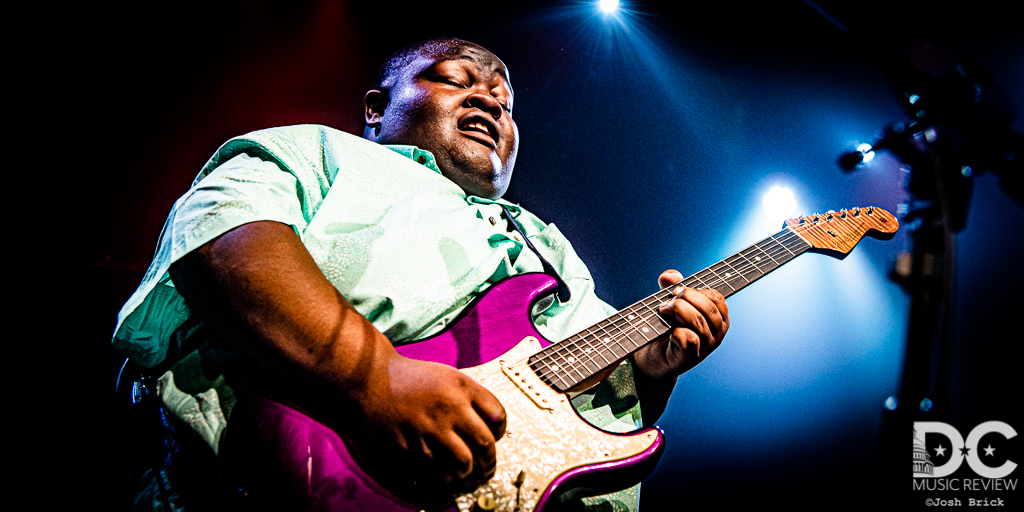 Those in attendance at the 9:30 Club last Thursday, November 21, were left awestruck by a budding blues guitar superstar. Christone "Kingfish" Ingram showed a raucous DC crowd what the buzz around him is about and why he is deserving of his recent Grammy nomination. The 20-year-old Mississippi native delivered a scintillating 2-hour performance that surely left a lasting impression on the diverse audience in one of the best music rooms in the country. Ingram wielded a magenta Fender Stratocaster for much of the night that proved the perfect weapon for his non-stop guitar assault. In addition to his mesmerizing fretwork, Kingfish boasts booming vocals, rich with deep soul and serious bite – the kind that few are blessed with, let alone a man a couple months shy of his 21st birthday. Touring in support of Kingfish –his debut album released in May this year – Ingram wasted no time as he came out swinging with some monstrous playing, full with a thick tone, beautiful bends and stunning ferocity. Kingfish is somewhat of a hybrid guitar player – paying tribute to his idols Muddy Waters, Robert Johnson and Buddy Guy, while also pulling from other guitar legends including Jimi Hendrix, Stevie Ray Vaughan and B.B. King.

Kingfish found himself in a bit of hot water early as he appeared to forget he was in DC when he asked how the people of Baltimore were doing after the opening tune. "Man it's been a long tour," he said, before tearing into "Fresh Out," a tune from his album that features Buddy Guy. After some stunning guitar work, forged with passion and ferocity – Ingram asked – "Did I redeem myself?" He most certainly did. Kingfish wading through the crowd

The blues stud demanded the crowd's undivided attention for the entire set – especially during "Love Ain't My Favorite Word." Kingfish left the stage and ripped some seriously tasty licks as he made his way through the packed crowd ,ascending to the second floor where he planted in the middle of the balcony and delivered a seemingly never-ending guitar solo  to the delight of the DC faithful. He returned to the stage to a massive roar before paying homage to Hendrix as he finished off the epic tune playing with his teeth. In another nod to his blues predecessors, Ingram closed out the long set with blistering renditions of "Born Under a Bad Sign" (written by Booker T., recorded by Albert King) and Catfish Blues (Muddy Waters). Thirsty for more music, the crowd was vocal in their desires and Kingfish obliged for a particularly tasty two-song encore. Ingram nearly tore the house down with a gargantuan "Hey Joe" that would have made Jimi proud – displaying the type of guitar power that few players posses. Feeling the excitement of the room, Ingram indulged us with the classic
"I Put A Spell on You," once more weaving his way through crowd as he delivered his last solo of the night in front of the merch stand. The crowd fawned over Kingfish, a new blues hero as he signed autographs and took photos with fans – many thanking him for a night they'll never forget.