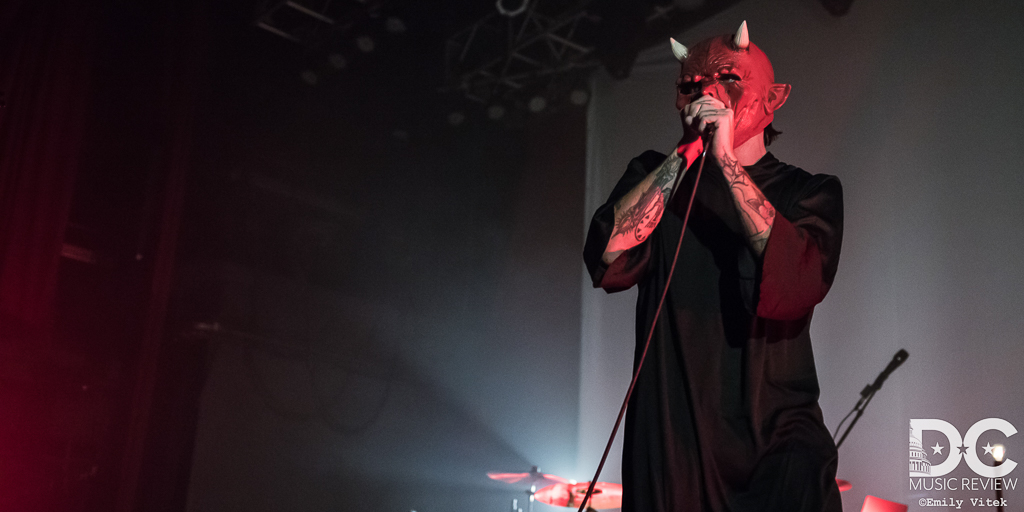 The day before Halloween, the Fillmore Silver Spring was packed with fans dressed in their Halloween best, hoping to win the evening’s costume contest. One lucky winner of the “Golden Ticket” received tickets to each of the Fillmore’s shows in 2019. But fans were not the only ones dressed in their best costumes. While supporting band La Dispute did not dress up for the occasion, headliner’s Circa Survive took on a Biblical theme with their costumes. Guitarists Colin Frangicetto and Brendan Ekstrom, along with bassist Nick Beard dressed up as nuns, while drummer Steve Clifford dressed up as Jesus, and frontman Anthony Green sported a devil mask. On a low lit stage accompanied by dim lights, Circa Survive opened their set with the song “Lustration” off their sixth studio album The Amulet, which was released September 2017. The Amulet marks Circa Survive’s first album released through Hopeless Records, after departing from their previous label, Sumerian Records. Circa Survive played a number of other songs off their newest album, including, “Tunnel Vision”, “Never Tell A Soul”, “At Night It Gets Worse”, “Flesh and Bone”, and title-track “The Amulet”. Towards the end of their set, Green gave a shout-out to the audience before playing an acoustic version of “Act Appalled” off their 2005 album Juturna. “I want to dedicate this song to everyone who has been coming to see us for so long,” said Green. “It’s crazy to look out and see people who we have been seeing at our shows for the last 10 years plus. Thanks for coming out and being weird with us.” Although La Dispute did not bring costumes to the show, they certainly brought energy, with frontman Jordan Dreyer jumping off the stage to the pit multiple times to sing with fans. La Dispute had a setlist full of fan favorites, with songs including “Such Small Hands”, “King Park”, “Woman (In Mirror)”, “Said the King to the River”, “The Castle Builders”, and “Fall Down, Never Get Back Up Again”. Despite all the excitement of the crowd, fans were respectful of one another. Dreyer made a point to show his appreciation for the fans, and related their attitudes to the outside world. “Thank you for taking care of the people around you”, says Dreyer. “It’s super important here, and also outside of here. Take care of people despite the differences you may have. Especially if you’re in a position of privilege, it’s really easy when no one’s after you”.

The Amulet Tour will continue through December 2nd, with support from Philly based band Queen of Jeans. If you missed Circa Survive and La Dispute in Silver Spring, you can see them when they return to the east coast for their show on December 1 at the Fillmore in Philadelphia, PA. Tickets can be purchased at www.circasurvive.com/tour.

Click here to see the setlist for Circa Survive's performance at The Fillmore Silver Spring on October 30, 2018