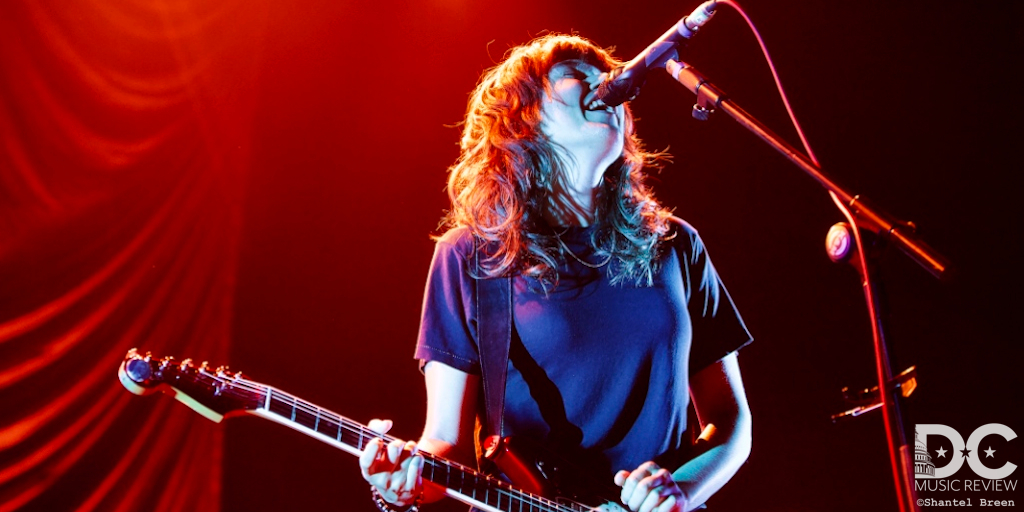 This past Tuesday, July 24, at The Anthem, we were treated to 3 hours of talented women musicians who know how to rock. All three musicians have been guests on NPR’s Tiny Desk series this year, illustrating their true talent. However, this evening these artists unleashed their true musical power through wailing guitars and dynamic vocals. The first artist to grace the stage was Vagabon.  Laetitia Tamko  leads this 4-piece band with creative synth beats and a voice so powerful that it filled entire space of the vastly sized Anthem.  Vagabon is a New York based band.  However, Tamko was born and grew up in Central Africa before moving to New York at age 13.  Her roots inevitably influence her music and lyrics.  The album Infinite Worlds centers around themes of life and community as well as the acceptance of others.  From the very first song, Vagabon had the audience memorized and attentive.  Although her set was rather short, she delivered it powerfully.  She left the audience with the song, "Cleaning House"​; a deep and beautiful acoustic song accompanied by violins. It would be difficult to believe that anything could be just as captivating as Tamko’s pure vocals, but then Julien Baker appeared. This 22-year-old musician took the stage seated at a keyboard with only a violinist for accompaniment. Her simple melodies were enhanced by her vocals, which were astounding coming from someone so young. The accompanying violin seems to cry along with Baker’s voice as she performed the first two songs. For the middle of her set, she picked up her guitar and performed three more energetic songs, engaging the audience. She rounded out her set just as she began with quiet keyboards and the violin. You can get a taste of Julien Baker with her Tiny Desk performance on NPR. Headlining performer, Courtney Barnett appeared on a low lit stage and performing her first song in near darkness. Her opening song, “Hopefulessness” started off quiet and peaceful until about half way through when the lights exploded to the sounds of wailing guitars. Lights flashed and the audience knew immediately that they were in for a legitimate rock show. Barnett continued to power through a 19 song set-list, rarely stopping the momentum. Song after song featured loud guitars and howling vocals. Even though the venue did not sell out, music literally surrounded the audience, filling the empty space in The Anthem.  Courtney Barnett is touring in support of her second album, Tell Me How You Really Feel.

This evening at The Anthem surely surpassed my expectations and I could not think of a better way to have spent my Tuesday evening!