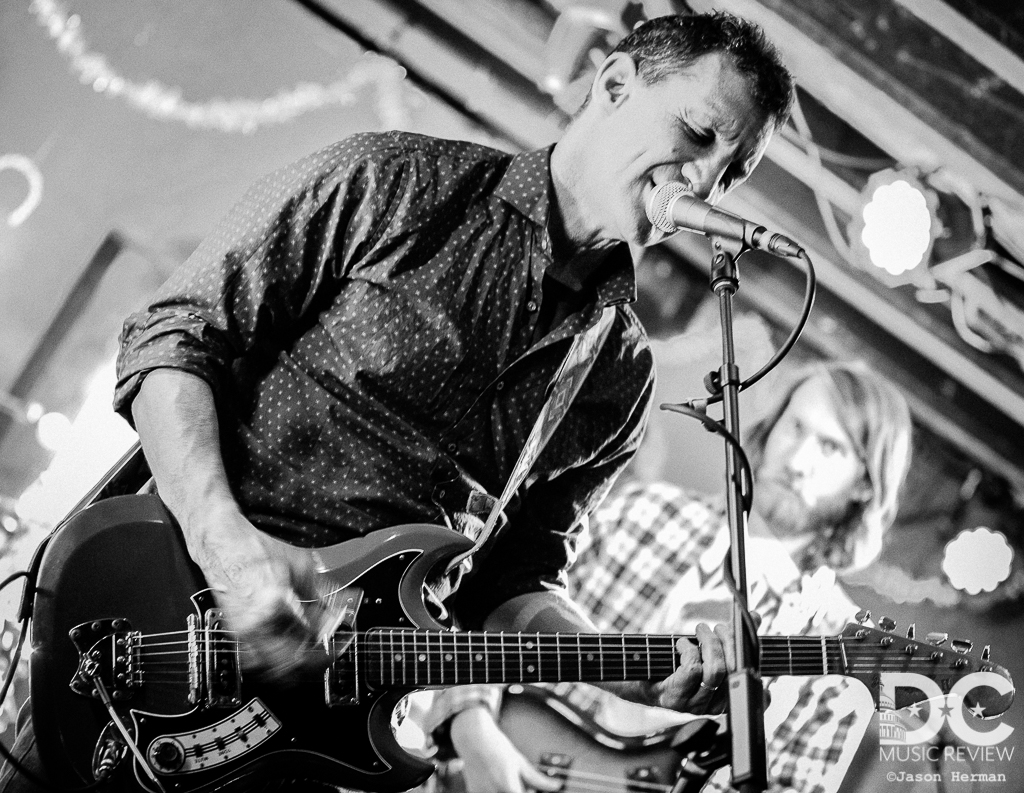 David Barbe, Athens, Georgia rock legend came to the DC9 Nightclub in Washington, DC on December 14th and brought Athens upstarts New Madrid with him. Barbe's influence in the music landscape has been significant. A fixture of the Athens music scene since the early 1980s, Barbe was the bassist in Bob Mould's post Husker Duband, Sugar and has produced almost all of the Drive-By Truckers albums. Today, he is currently running the University of Georgia's Music Business School and was inDC in support of his latest album, 10th of Seas, his first album in seven years, and one in which he performed on all instruments.

Before this performance, audience members gathered around the venue to share and relive anecdotes of Athens, Georgia's rich and magnificent music history. Barbe made an unexpected appearance before the show to greet friends and fans who, in some cases had traveled all the way from Athens to attend this performance. Barbe took to the stage with New Madrid, playing as Inward Dream Egg. During this performance, Barbe played many songs from 10th of Seas, which had a distinctive Athens and gritty southern rock feel. Audience members swayed in unison to a steady drumming backbeat, supplanted with a compelling bass line. Several songs had a syrupy feel with celestial guitar performances that, at times washed over that steady backbeat of the drum and bass components of the song. Tying each song together was Barbe's distinctive voice and vocal delivery. This concert's setlist consisted of complimentary songs, one song would have a simmering or gritty sustained tension in them while the next song would be an energetic or gleeful rocker which would allow stored up musical tension to be released. Guest saxophonist Ethan Evans, long time friends with New Madrid, lent his dynamic musical voice throughout the evening, adding to the smooth groove of a song, and at other times adding brass panache. As Barbe walked off stage he was greeted by many fans, greeting them with a smile, an open hand to shake, and conversations to be had. After a brief intermission, New Madrid took the stage. New Madrid consists of Graham Powers (lead guitar, vocals), Phil McGill (guitar, vocals), Ben Hackett(bass, vocals), Alex Woolley (drum, vocals). Each member of this band is exceptionally talented and ensures a very memorable performance. One last highlight occurred as David Barbe retook the stage, on the drums, for the last song of the set. This was Barbe lending a hand, as it turned out that Alex Woolley played while sick that night was clearly suffering towards the end. This highlighted another of Barbe's musical talents, in addition to his vocals, guitar, and bass proficiencies. As the last song ended, the crowd cheered for an encore. Not expecting an ailing Woolley to perform an encore, Barbe told the crowd “This will be an experiment”. The encore was quite stellar and beautifully executed as Hackett, Powers, and McGill succeeded in turning to Barbe on drums and exchanging musical moments.

New Madrid has a devoted following from Athens that extends beyond their native Georgia. Several individuals proudly wearing their University of Georgia sweatshirts said that New Madrid traditionally comes to the DC are only one or two times a year, and they never miss a performance.

Following the performance, New Madrid and David Barbe talked with fans and shared stories. Barbe was gracious, sharing anecdotes and an endless depth of musical knowledge with audience members. At DC Music Review, we hope that Barbe does not take another 7 years to release his next album and returns to Washington, DC soon, and we look forward to New Madrid's next appearance.

Both Davide Barbe and New Madrid's music can be found on the following platforms.