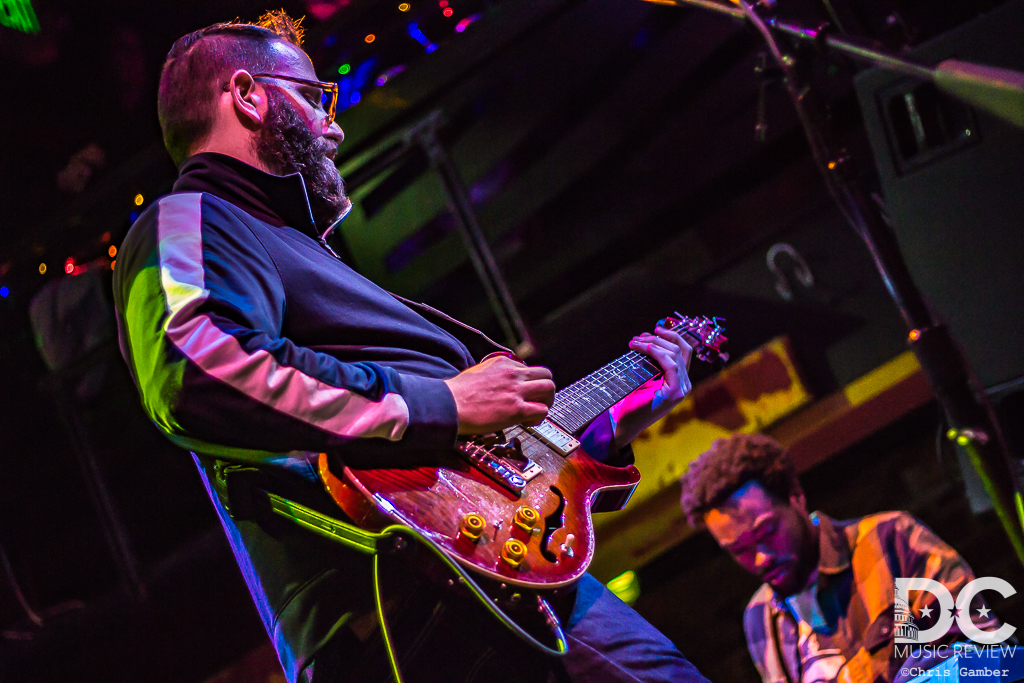 This past Friday night in Baltimore, Jazz is PHSH brought their jazz fusion interpretations of Phish’s catalogue to the beloved 8x10 in Federal Hill. Founded by brothers Adam and Matthew Chase (formerly members of Phish tribute band Strange Design) they were accompanied by a rotating cast of musicians from the jazz and jam music communities. Friday night’s show would feature the two Chase brothers, Matthew (guitar), and Adam (drum), a small horn section consisting of Carl “Geerz” Gerhard (trumpet and a legendary part of "Phishtory") and Jay Rodriguez (saxophone), Josh Thomas on keys, and Baltimore born bassist Corey Baker who was featured prominently throughout the evening.

The first set started with a bang as the band went right into “Carini.” With no vocalists, the horn section will typically take over the role, playing the vocal melodies. Such was the case on “Carini" as they played with the structure of the song to fit the jazzy/funky format that gives the band their signature sound. Next to come was a short but energetic version of “NICU” that set the stage for a funky extended “Tweezer,”which was one of the highlights of the show. Using their jazz fusion sound, blended with Phish’s tension and release jamming style, they created some great sonic space during this jam and found some really funky grooves. It was a great rendition of one of the most sought after songs in the Phish catalogue. "Brother" came next, a song rarely played by Phish anymore. With a punching bass line and a double time tempo, the rhythm section really stood out on that song. "Wilson" got the crowd involved as soon as they heard those familiar chords signaling them to start the Wilson chant. Matthew Chase took a blistering guitar solo during the Phish rocker that had the attendees moving. The rhythm section got another chance to shine during the funky "Meat," as Corey Baker (bass) switched instruments with drummer Adam Chase.They really went for the jazz sound, as they completely left the structure of the song for a while. Each musician did some unique freeform playing and interpretation that was really different from what a fan would expect the song to typically sound like. This performance was Adam's first on stage appearance on bass which made it an even more unique concert.

"46 Days" continued the first set in rocking fashion as "Stash" brought the set to a close. "Stash" is one of those songs that seems like it was meant for a jazz group: the melody and structure of the song really worked with the fusion sound that Jazz is PHSH has perfected. They don’t simply cover the songs, but rearrange them to add more space for the musicians on stage.

The second set started with another song that is rarely performed by Phish these days: "Camel Walk." This was the start of a common theme of the second set: funk. A tight and polished version of the quirky "Cars Trucks Buses" set the tone for the real meat of the second set, as the one-two-punch of "Ghost" and "Bathtub Gin" followed. These two Phish favorites are always welcome at any show, and tonight would prove no different. It was cold outside, but the funk that would come out of "Ghost" would keep everyone inside the show warm and fuzzy as we danced. Jazz is all about interplay, and there would be no shortage as the horns and rhythm section weaved in and out of each other setting up another great guitar solo to bring the song to a peak. "Bathtub Gin" featured more of the same. As a jam vehicle for Phish it proved the same for Jazz is PHSH. The jam extended into a funky space that kept the dance party going strong. After the extended dance party, the crowd got some downtime as the set closed with two Phish classics — "Lawn Boy" and "Dinner and a Movie." After a short encore break, the band returned to the stage for one last song, "Golgi Apparatus." A short but sweet high energy song, it was a fitting way to close the show. Even though there were no vocalists on stage, it didn’t stop the crowd from singing the familiar "I saw you, with a ticket stub in your hand" chorus.

This was another fine night of music in Baltimore at the 8x10, and another great show from Jazz is PHSH. We are always excited when these guys play in the DMV and we hope they come back soon.

Click here to see Jazz is Phish's setlist for December 8, 2017

6. Dinner and a Movie