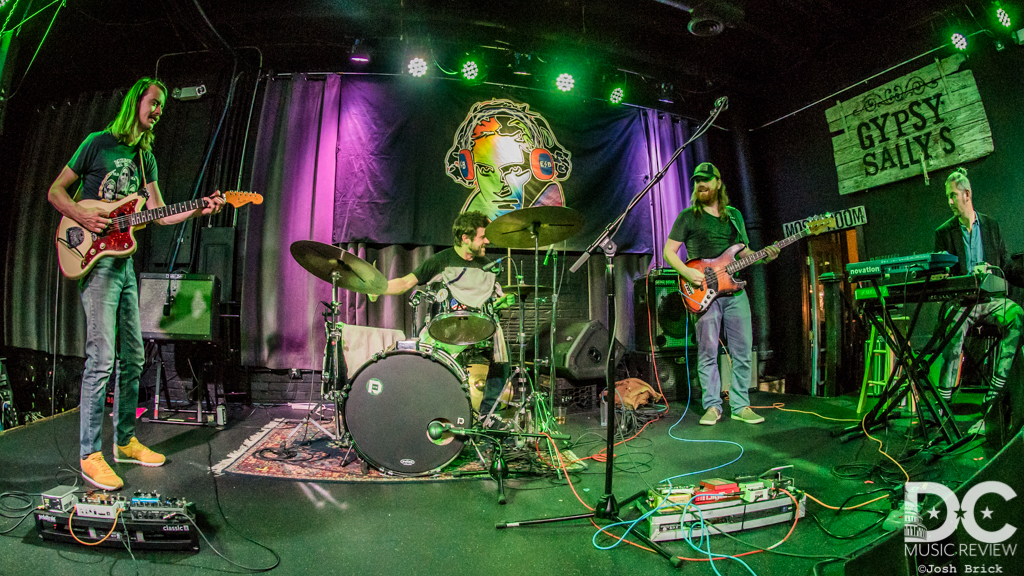 Electric Beethoven kicked off their "Maps We Found in the Northeast" tour at Gypsy Sally's on February 21st. This was the first time the band members collectively hit the stage in several months and with the new addition of Josh Rayner on drums, it was an exploration into uncharted territory. Before the band hit the stage, they could be found behind Gypsy Sally's happily engaging the fans and talking about shows and adventures past including their last two appearances in the area at The State Theatre in Falls Church, VA and the 9:30 Club in Washington DC..

The evening began with Virginia-based Definition of One, who's electronic jam dance music set the stage for an explosive night of dancing and musical exploration. Todd Stoops of Electric Beethoven sat in briefly on his Moog with a prelude of what was to come later. It should be noted that Definition of One is an under-represented band who's infectious grooves and music should appear at more venues around the region.

Reed Mathis and Electric Beethoven hit the stage at 9:30PM and began a wonderous interpretation and exploration of Beethoven's music. Thought the evening Reed Mathis (bass), Todd Stoops (keys), Clay Welch (guitar), and Josh Raymer (drums) traversed and jammed within a complex and layered musical landscape of interwoven and interactive jams. Despite a modern take on Beethoven's music, one could not help but recognize the distinct underpinnings of Beethoven melodies played throughout the night by Stoops, Mathis and Welch. The musicians were enjoying themselves, glancing at one another with smiles, experimenting with jams and letting Beethoven's music conduct them. The evening's performance resulted in a modern jam that is new and refreshing and breathed new life into music that is nearly 200 years old.

Please enjoy the full webcast and Soundcloud Audio of each performance in the tabs below.

Electric Beethoven's webstream performance recorded by our collaborator Will Urquhart.

Electric Beethoven's audio recordings of the performance recorded by our collaborator Will Urquhart.

Definition of One's performance recorded by our collaborator Will Urquhart.

Definition of One's audio recordings of the performance recorded by our collaborator Will Urquhart.

To learn more about Definition of One, visit their Facebook Page