FIDLAR Brings The LA Heat To The District 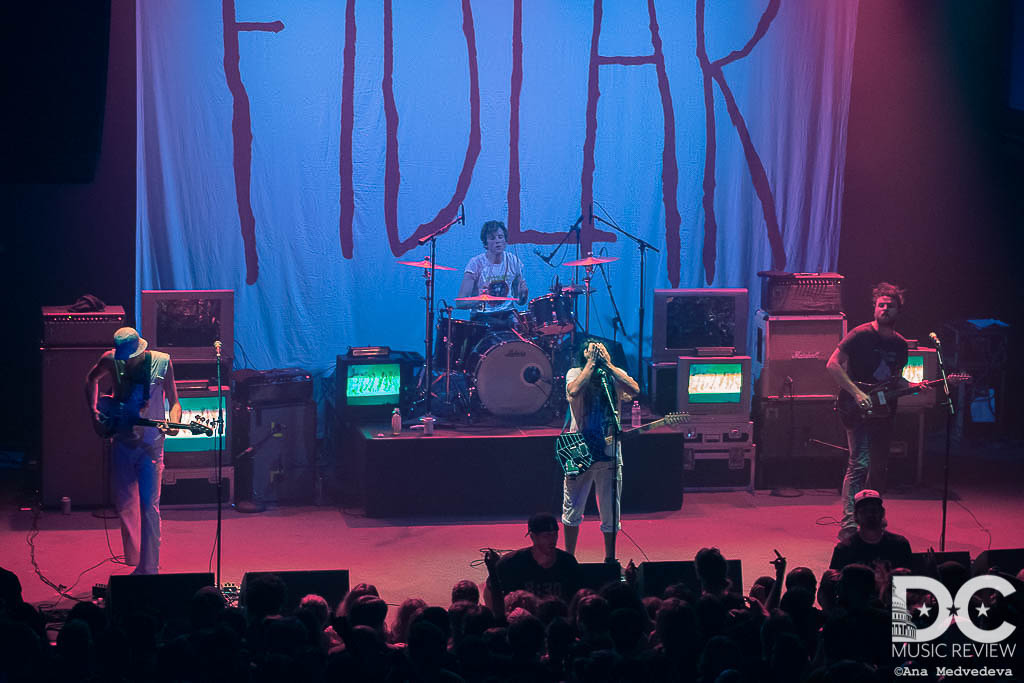 As the clock struck 10PM and the lights dimmed last Tuesday, September 18th,  the fans lining the edges of the 9:30 Club swiftly made their way to the middle of the floor. Surrounded by old school TV monitors, FIDLAR took to the stage to the backdrop of their logo stylized to resemble the graininess of the VHS era.

Kicking off the night with one of the many love letters to substances that used to rule Carper’s life, the audience jumped and moshed to “Alcohol”.

Many of FIDLAR's songs focus in on the power that drugs and alcohol can have on an individuals life. From song titles such as "Cocaine" and "Wake Bake Skate" to an entire song dedicated to the itch to use heroin, the band gives their young audience a picture of the unorganized brain a drug addict lives with. But the messiness of drugs and struggle with sobriety aren't the only themes that these four focus in on. Stopping for a quick chat mid-show, Carper commends the audience for their energy and respect for each other.

Next on the agenda: focusing in on the prevalence of sexual misconduct and abuse at concerts. Aiming to provide a safe space at the show, he further calls for a girls only mosh pit as the band launches into another song from their debut album, "5 to 9".

After giving the male dominated audience a reminder to be diligent in preventing sexual assault at shows, the band smoothly transitioned into their "Are You High?", their newest release.

Pushing his lengthy dark brown locks behind his ears, Carper, motioned at the sweaty 9:30 Club crowd,

“Alright, everyone....this side, move to the left. And you guys, go to the right. Now everyone sit down. When this song picks up, you know what to do.” With the music rapidly picking up, the exciement filling the room was palpable. Faces illuminated by the flashlights on their phones, the crouching audience readied themselves for the "Wall of Death" that was about to ensue.

Simultaneously jumping up and running at each other, the crowd moshed to their hearts content, a sweaty musk filling the venue. With smiles plastered across their flushed faces, the crowd filed outside, expended of all their youthful energy.

FIDLAR is currently on tour in North America until November. To learn more about the band, visit their website.